Neither is there evidence for the claim that Russian forces have been "hammering biolabs & pedophile rings" in Ukraine. The claims were made in an article on a self-described satirical website whose disclaimer says it publishes articles for "entertainment purposes." In a Foreign Policy magazine article, a journalist writes that the theory that Putin is destroying biolabs in Ukraine comes from conspiracy theorists.

Russian President Vladimir Putin on Tuesday told President Trump that Russia's military destroyed a multitude of foreign bioweapon facilities that had been running carte blanche in Ukraine until his military took decisive and strategic action to rid the corrupt nation of what he called satanic influence, a Mar-a-Lago source told Real Raw News ... Moreover, Putin said his fighter planes had destroyed a Biden-owned, 200-acre villa 35km west of Kyiv. He insisted that Biden was deeply enmeshed in Ukraine's criminal enterprises, and promised Trump that he'd soon give the world 'all the evidence it needs.' 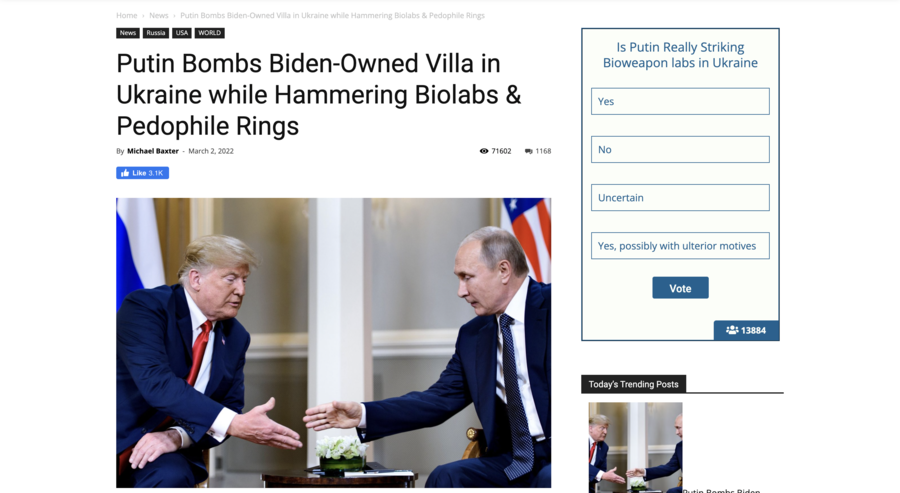 Lead Stories used Google to search for evidence of the claims in this article. These searches (here and here) did not result in any credible evidence to support the claim.

There also is no information publicly available to substantiate the claim of Bidin owning a villa in Ukraine.

Lead Stories has previously debunked a claim alleging there are U.S.-run bioweapons labs in Ukraine.

In a Foreign Policy article titled, "False Claims of U.S. Biowarfare Labs in Ukraine Grip QAnon," journalist Justin Ling writes about how the theory that the U.S. has a multitude of biolabs in Ukraine and that Putin is destroying them comes from QAnon conspiracy theorists and is not based in reality.

More Lead Stories fact checks about the 2022 Russia-Ukraine conflict can be found here.