Do the prices for oil and gas always move in tandem? No, that's not true: Although the two closely track each other, there is often a time lag. That's especially true when oil prices fall; historically, it takes a while for gas prices to catch up by going down. There are various explanations for the lag, including the fact that it takes time for price changes to filter through the supply chain. Retailers may also be trying to make up for earlier losses or taking advantage of the higher prices, especially when uncertainty is in the air. 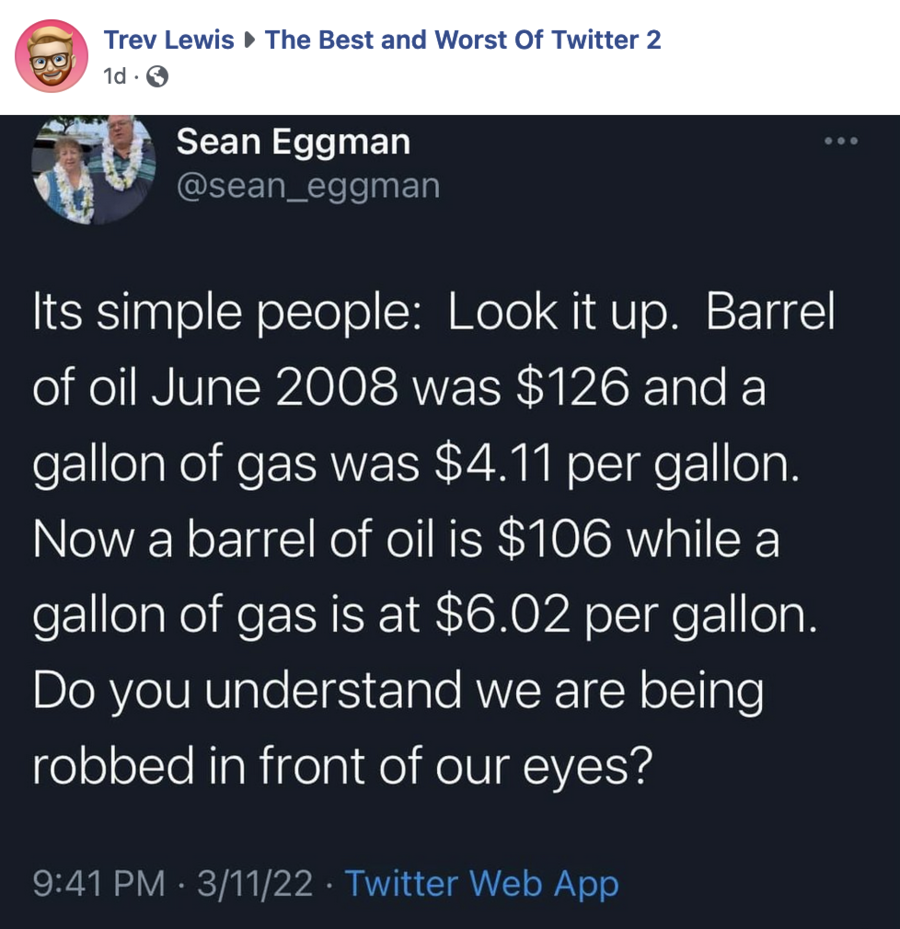 The post provides a snapshot that's missing some important context.

First, in early March 2022, oil prices spiked to levels not seen since 2008, hitting a high of $130 per barrel. It's true that they have since dropped dramatically.

Second, as of March 17, 2022, the time of writing, gas prices are falling, albeit not as fast as oil prices.

Since March 14, 2022, the national average for a gallon of regular gasoline has decreased by four cents to $4.28, according to the American Automobile Association (AAA). The association predicts that gas prices will likely keep falling, so long as the price of oil continues to decline.

Lead Stories reached out to AAA to ask about the relationship between oil and gas prices. Spokesman Andrew Gross said this in a phone conversation on March 17, 2022:

When the price of oil surges, it's almost immediate at the gas station that it goes up too. The inverse is not true. When [oil] prices drop, it's real slow to drop at the station.

What he was describing is a phenomenon known in the industry as rockets and feathers. The idea is that gas prices tend to rocket up alongside oil prices, but fall slowly, like a feather, when oil prices drop. There are several possible explanations for the lag.

According to the American Petroleum Institute, it simply takes time for changing market conditions to wind through the supply chain. A gas station owner may be selling fuel that she bought earlier when oil prices were higher.

Alternatively, some experts say that retailers may hold the higher prices to make up for earlier losses. Patrick De Haan, head of petroleum analysis at GasBuddy, makes the case that retailers are not able to pass the full cost of higher oil prices on to consumers immediately because of competition. "Stations lost their shirts on the way up, so the drop will be slow," he wrote on Twitter.

WTI $98/bbl... the drop in #gasprices should accelerate and if oil stays in double digits the national average could decline under $4/gal in the weeks ahead. Stations lost their shirt on the way up, but now margins are improving and they will start passing the discounts on to you.

Another possible explanation is that retailers are simply trying to take advantage of higher gas prices. A 2014 report from the Federal Reserve Bank of St. Louis acknowledged that opportunities exist for retailers to benefit from price changes:

Retailers might also be hesitant to lower their prices given the uncertainty and volatility in the oil market. Gross, the AAA spokesman, said they wouldn't want to drop their prices at the pump only for the price of oil to jump. He noted:

Just today, the price of oil started to go back up again.