Rather than a virus, is COVID-19 instead snake venom being used to poison people or turn them into satanic hybrids? No, that's not true: The claim is part of an elaborate conspiracy theory packed into an anti-vaccine documentary filled with falsehoods, scare tactics and religious imagery that takes viewers from the Garden of Eden to modern times.

The virus that became known as SARS-CoV-2 was first reported in December 2019 during an outbreak occurring in Wuhan, China. The first genetic sequences were published, identifying it as a coronavirus, and it was named in January 2020. Vaccine maker Pfizer says its shot "does not contain any animal products."

The claims appeared in a video (archived here) published to Rumble on April 11, 2022, titled "LIVE WORLD PREMIERE: WATCH THE WATER." It opens:

The plandemic continues, but its origins are still a nefarious mystery. How did the world get sick, how did Covid really spread, and did the Satanic elite tell the world about this bioweapon ahead of time? Dr. Bryan Ardis (www.ardisantidote.com) has unveiled a shocking connection between this pandemic and the eternal battle of good and evil which began in the Garden of Eden. 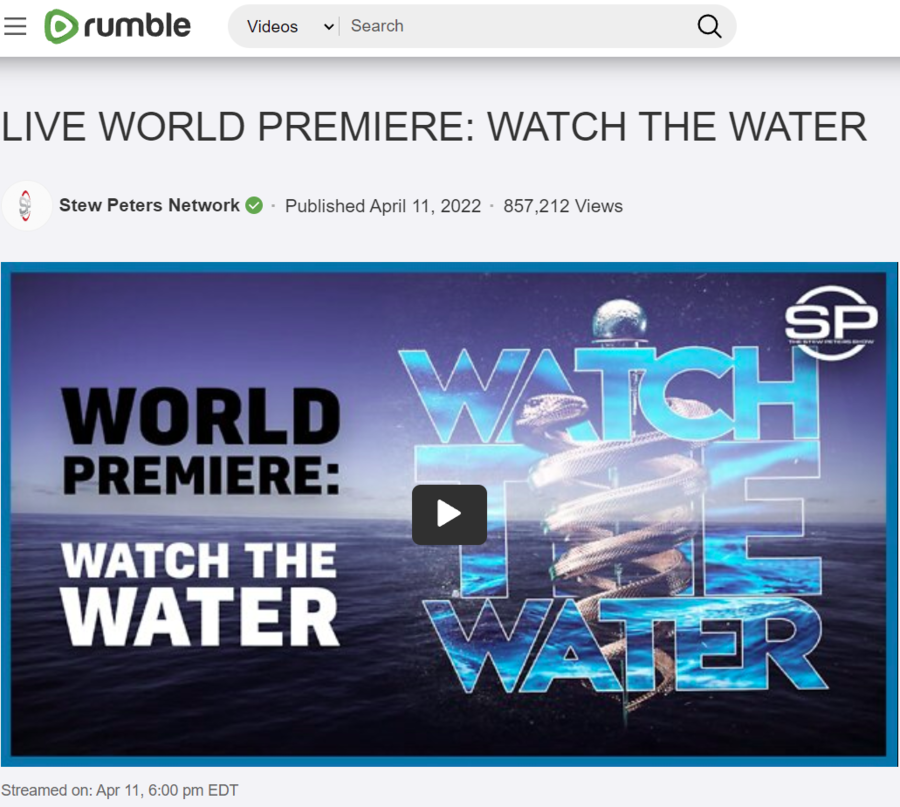 The 48-minute anti-vaccine documentary, which first aired on the April 11, 2022, Stew Peters Show, features an interview with Bryan Ardis, a conspiracy theorist, dietary supplement entrepreneur and doctor of chiropractic. He begins his lengthy case by condemning the COVID treatment remdesivir that was endorsed by Dr. Anthony Fauci, director of the National Institute of Allergy and Infectious Disease. Previously, Lead Stories debunked "testimony" Ardis gave before a fake grand jury. At 13:13 into the show, he says:

Ardis goes on to claim that remdesivir is toxic and deadly, targeting specific organs in the body, as some snake venom does. The National Institute of Health's COVID-19 Treatment Guidelines Panel says remdesivir is approved by the Food and Drug Administration to treat COVID in high-risk patients.

In a February 18, 2022, email to Lead Stories, Jeff Lancashire, a public affairs officer with the National Center for Health Statistics (NCHS) at the Centers for Disease Control and Prevention, said this about the broad-spectrum antiviral medication:

NCHS does not have any data on deaths related to remdesivir.

Digging deeper into his claim of a connection between COVID and snake venom, Ardis said he became concerned when the United States paused monoclonal antibody treatments for COVID in late March 2022 and stopped them completely in early April 2022. He said it was a text message he had received from an emergency room doctor weeks earlier that eventually help him connect the dots. It was following an interview on another television show that also specializes in conspiracy theories: 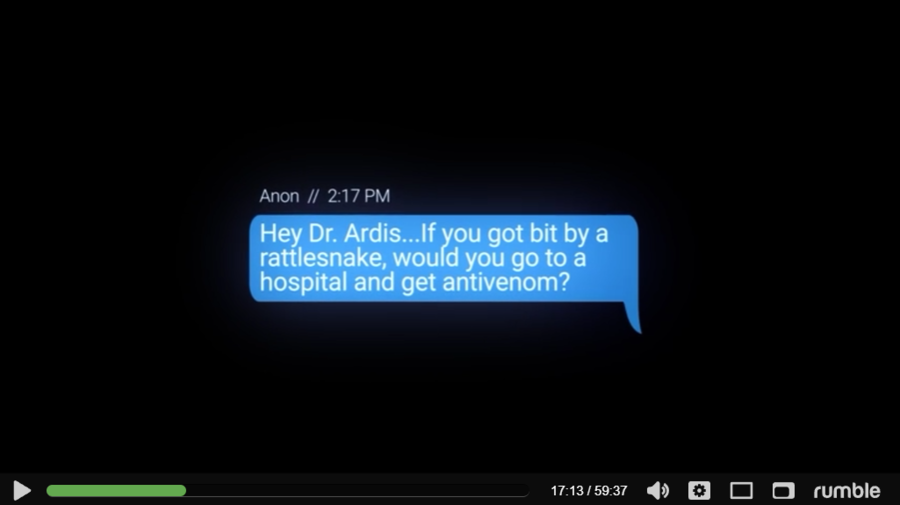 While the federal government said monoclonal antibody treatments were being paused "effective immediately" since they were shown to be ineffective against a subvariant of omicron, Ardis told Peters at 22:10 that he sees something much more nefarious taking place:

If it's true that COVID could actually be snake venom -- and how I got there was they don't support the use of anti-venom called monoclonal antibodies because they work.

Ardis cited a University of Arizona, Stony Brook University and Wake Forest School of Medicine study for his conclusions. But to be clear, the authors of the study never equated the neurotoxins in rattlesnake venom to the enzymes found in those who died from COVID:

The sPLA2-IIA enzyme, which has similarities to an active enzyme in rattlesnake venom, is found in low concentrations in healthy individuals and has long been known to play a critical role in defense against bacterial infections, destroying microbial cell membranes.

And while anti-venom contains monoclonal antibodies to boost the immune system of the person bitten by a snake, it's not the same product or treatment as for COVID-19. An anti-venom fights a type of poison. The other attacks a virus.

Despite the differences, Ardis said this at 33:20 of the documentary:

I am convinced that COVID-19 is not a respiratory virus of any kind. It is actually venom poison and they're using, I believe, synthesized peptides and proteins from venoms of snakes and they're administering them and targeting them to certain people.

He says it's in the water

If COVID's not a virus, then how does it spread? Starting at 43:15 in the video, Ardis said the culprits are remdesivir (as previously mentioned), water and vaccines:

The thing about the water is this. They're using the water systems because they can target specific demographics. They are absolutely confident that the peptides they have chosen for COVID, circulated throughout the Earth and throughout the populous, specifically targets, and the vaccines and the mRNA in the vaccines, specifically target organs like your spleen, your pancreas -- for diabetics that's a concern -- brain tissue, liver tissue, lung tissue and heart tissue. So, if you already have a disease process of inflammation of any of those organs, you are the ones they're targeting.

The devil is in the details

This all plays into a greater QAnon conspiracy theory of global satanic elites and their plans for the world. At 34:13, Ardis tells Peters:

[Ardis:] The serpent. Can you think of anything more evil than envenomating the entire world with snake venom and then injecting snake venom into your veins?

As Ardis wrapped up his case at 51:40, he dug even deeper into religious symbolism:

I think this is the plan all along was to get the serpent's, the evil one's DNA into your God-created DNA and they figured out how to do it with this mRNA technology. They're using mRNA ... to get that venom inside of you and make you a hybrid of Satan, no longer just belonging to God or a creation of God's.

The Centers for Disease Control and Prevention website says it's a myth that COVID-19 vaccines alter human DNA:

FACT: COVID-19 vaccines do not change or interact with your DNA in any way.

Both messenger RNA (mRNA) and viral vector COVID-19 vaccines work by delivering instructions (genetic material) to our cells to start building protection against the virus that causes COVID-19.

After the body produces an immune response, it discards all the vaccine ingredients just as it would discard any information that cells no longer need. This process is a part of normal body functioning.

The genetic material delivered by mRNA vaccines never enters the nucleus of your cells, which is where your DNA is kept. Viral vector COVID-19 vaccines deliver genetic material to the cell nucleus to allow our cells to build protection against COVID-19. However, the vector virus does not have the machinery needed to integrate its genetic material into our DNA, so it cannot alter our DNA.

And in an April 12, 2022, email to Lead Stories, vaccine manufacturer Pfizer said:

The vaccine does not contain any animal products and is completely synthetic.

Lead Stories requested a response to the claim from Moderna but had not received one at the time of writing.

The anti-vaccine documentary also included previously debunked claims about nanotechnology being included in the shots.