Did Ketanji Brown Jackson, President Joe Biden's Supreme Court nominee, preside over the Pizzagate sentencing hearing? Yes, that's true: In 2017, then-U.S. District Judge Jackson sentenced the Pizzagate gunman to four years in prison for the 2016 attack. She told him that his actions "literally left psychological wreckage." The gunman has since been released from prison but has not done any interviews.

In other news...besides Will Smith allegedly slapping his wife's name out of Chris Rock's mouth...
Do you remember PizzaGate? 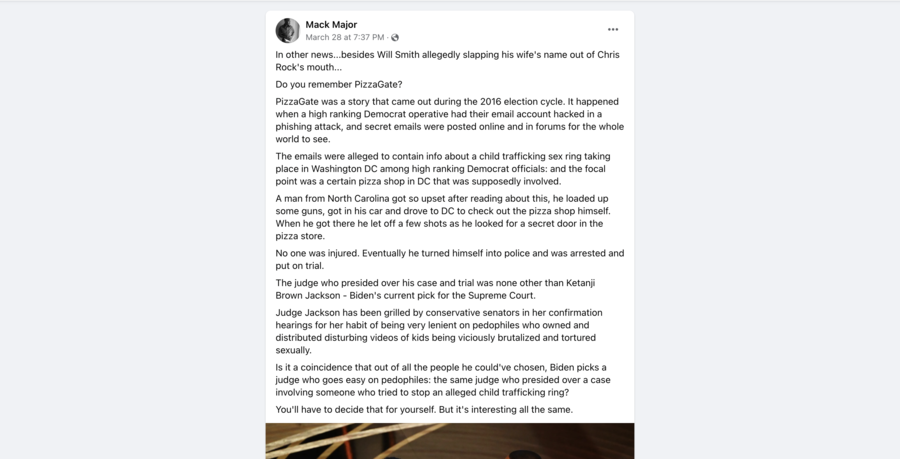 Further down in the post, the Facebook user brings up Jackson's relationship to Pizzagate, "The judge who presided over his case and trial was none other than Ketanji Brown Jackson - Biden's current pick for the Supreme Court."

It is true that Jackson was the judge that presided over the Pizzagate sentencing hearing. The Supreme Court's website has a three-page PDF from a National Public Radio article about the hearing.

Welch, originally from North Carolina, was sentenced to four years in prison for the attack. He was charged with assault with a dangerous weapon and transporting a firearm over state lines. He pleaded guilty to both charges.

The Seattle Times reported on Welch's reintroduction to society in 2021 with their article, "The Pizzagate gunman is out of prison. Conspiracy theories are out of control." Welch and his wife did not respond to a request for comment, but he remains largely out of sight, according to the Seattle Times.