Did Supreme Court Justice Sonia Sotomayor get hung at Guantanamo Bay? No, that's not true: There is no evidence that she was sentenced to hang at Guantanamo Bay. A duty officer from the Pentagon told Lead Stories that the claim was false. There has also been no media coverage about Sotomayor being sent to Guantanamo Bay or being hung there at the time of writing.

The claim originated from an article published by Real Raw News on March 29, 2022, titled "Sonia Sotomayor Hanged at GITMO" (archived here), which opened:

As Monday's internet traffic was clogged with articles and memes about actor and illuminati member Will Smith slapping comedian Chris Rock at Sunday night's pedophile summit known as the Academy Awards, a story of greater importance, the hanging of former Supreme Court Justice Sonia Sotomayor, received nary a whisper. 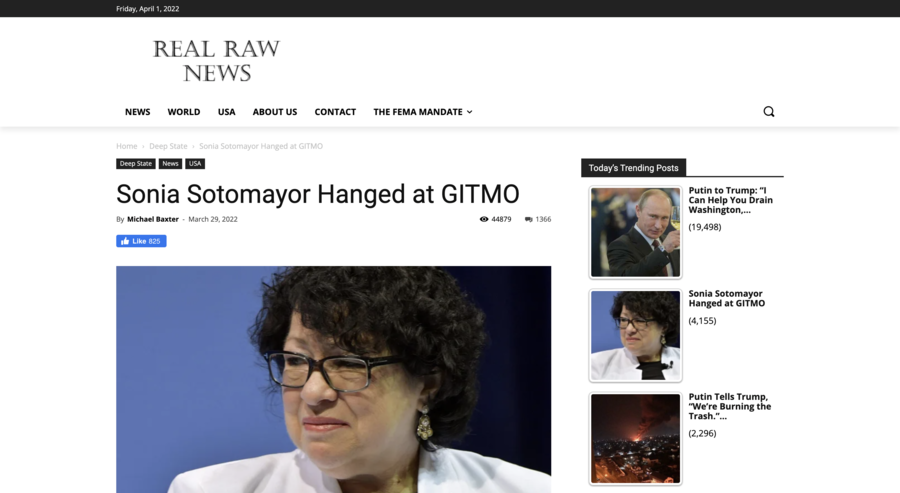 Lead Stories reached out to the Pentagon to ask if Sotomayor had been hung at Guantanamo Bay. An email from the Pentagon on April 1, 2022, confirmed that this claim is false.

A Google search for "Sonia Sotomayor hung at Guantanamo Bay" did not result in any reporting from a reputable media source at the time of writing. However, one of the top results was a Lead Stories fact check published on March 15, 2022, that debunked another Real Raw News article stating that Sotomayor was sentenced to death at Guantanamo Bay.