Does the Rothschild family have an amassed wealth of $2 trillion? Do the pope and Vatican City have a net worth of $20 trillion? No, a post making those claims does not substantiate the numbers. Both of these groups are extremely wealthy, but those numbers are not accurate based on public information. The Rothschilds' investment banking company had a net income of $830 million in 2021, according to an annual report on the Rothschild & Co website. Vatican City had net assets of $4 billion in 2019, according to a Reuters article.

This video shows who is the richest people in the world actually are. So let's see who's at the top. 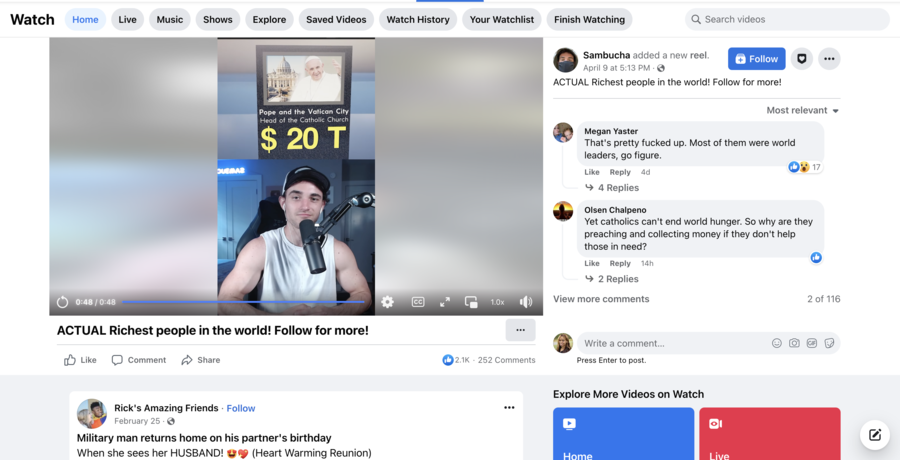 The video that the Facebook user, Sambucha, is reacting to is not his content. The video of two minutes and 34 seconds was originally posted by the YouTube channel KkData, a self-described "subscriber-driven platform" based in India. Sambucha reacted to this video on his YouTube channel by the same name, clipped that video and then posted it on his Facebook page. The 48 second-long video seen on Facebook is a list of current and former leaders around the world with their alleged net worth placed below a picture of the person. The last, and largest, two on this list are the Rothschild family, with the video claiming they have a net worth of $2 trillion, and the pope with Vatican City, with the claim that their wealth is $20 trillion. Neither the Facebook video nor the YouTube video cite any sources to explain the basis of the numbers or where the information came from.

According to a Reuters article, Vatican City's net assets were about $4.3 billion in 2019. Father Juan Antonio Guerrero, the Vatican's economy minister, gave the number as an all-encompassing figure. Lead Stories reached out to the Holy See to inquire about Pope Francis' net worth. We will update this story if we receive a response.