Does a photograph of a person wearing a checkered skirt and a dark top show Salvador Ramos, the Texas school shooter? No, there's no evidence that's true: A post making the claim does not identify the source of the photo, which appeared on 4chan, an online message board, the day of the shooting. The user who posted the photo on 4chan later wrote that the image was "a super old picture of me." Lead Stories has not been able to confirm the identity of the individual behind the posts.

The photo appeared in a Facebook post on May 25, 2022. It includes a photo of Ramos' face, atop the photo of the person wearing a skirt. Text along the bottom of the image reads: 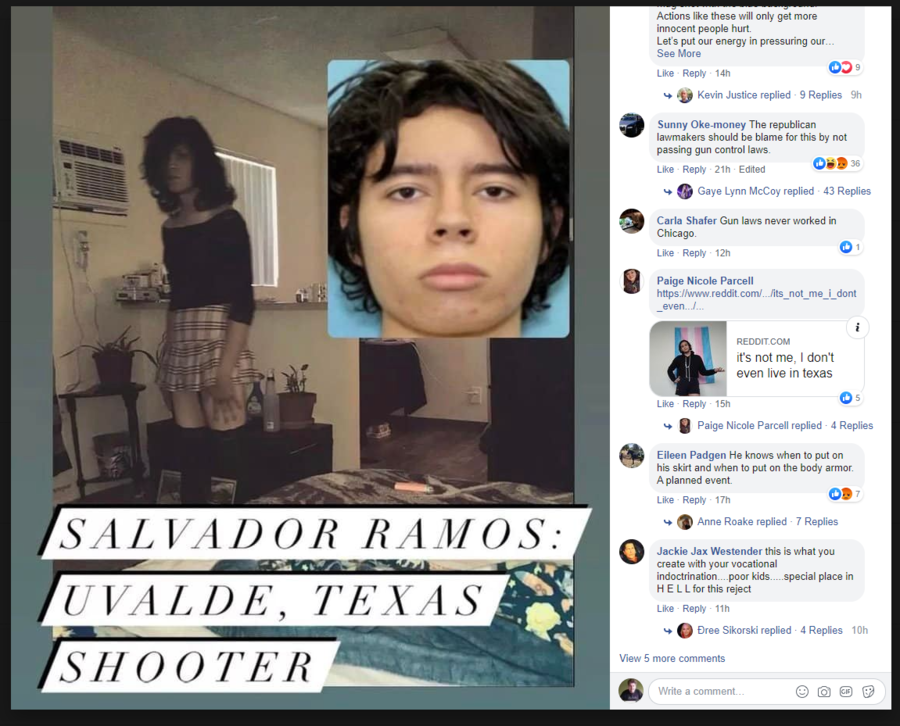 The post does not identify the source of the photo, which appeared on 4chan on May 24, 2022, the day of the shooting. The archived thread can be seen here. Alongside the photo, the 4chan user wrote:

Salvador Rolando Ramos, Texas school shooter had a Vsco account where he had a pic of himself wearing women clothes

Lead Stories reached out to VSCO, a photo and video editing app, to ask about the claim. A spokesperson responded, via email on May 27, 2022, that the company "has no record of anyone associated with the mentioned handle or profile."

Later, the same poster (identified by a tripcode, which is a sort of ID) wrote that the image was "a super old picture of me." The person wrote:

Okay it's time to spoil the fun, this is actually a super old picture of me to test and troll /pol/, some of the others were dumb as fuck in the other thread, yall really need some eyes, I'm glad others caught on though, I mean my face isn't even the fucking same, look at my chin and his.

I'm not posting my new pic because it'll dox me. I don't even look like this anymore, yet I'm a cutie though

At the time of writing, Lead Stories has not been able to confirm the identity of the individual behind the posts, nor whether the photograph was, in fact, a photo of the poster. The posts strongly suggest, however, that the photo does not show Ramos.

Lead Stories has previously debunked the claim that other images depicting a person dressed in a skirt and holding a transgender pride flag show Ramos. That story can be seen here.

In total, social media posts in the wake of the shooting combined published photos of Ramos alongside pictures of three different -- and unrelated -- trans people, according to the Trans Safety Network, a U.K.-based research collective. The group said that all three individuals have since confirmed online that they are alive. None had anything to do with the attack at the elementary school in Uvalde, Texas, which claimed the lives of 19 students and two adults. Ramos also died at the scene of the shooting.

Lead Stories reached out to the Trans Safety Network to see if anyone there had talked to the anonymous 4chan poster. They had not.

We also reached out to the Texas Department of Public Safety. We will update, as appropriate, if we hear back.

If any reader has any information about the photograph, please feel free to share tips and comments via our contact page.