Was the Titanic sunk intentionally in order to kill specific people who opposed a central banking system, thus clearing the way to establish the Federal Reserve? No, that's not true: This antisemitic conspiracy theory was already floating around the internet before it was promoted to followers of QAnon. There is no evidence to support this.

In November 2017, a series of posts and leading questions, called Q Drops, appeared on the message board 4chan. The posts included leading questions about a wide variety of topics including the Titanic disaster. The conspiracy theory alluded to in those questions appeared reframed as a meme in a Facebook post on May 13, 2022. The post was captioned:

They invited everyone who was opposed to central banking to sail upon the 'unsinkable' Titanic. Those who were for central banking cancelled at the last minute. They then sank it on purpose, eliminating everyone opposed to the Rothschild ponzi scheme. This is how the Federal Reserve was created. 💯

The text within the meme reads:

How to create the Federal Reserve
A Quick and easy tutorial
1. Tell everyone that you just built an unsinkable cruise ship
2. Invite those opposed to centralized banking for a cruise
3. Go full throttle into an iceberg-field 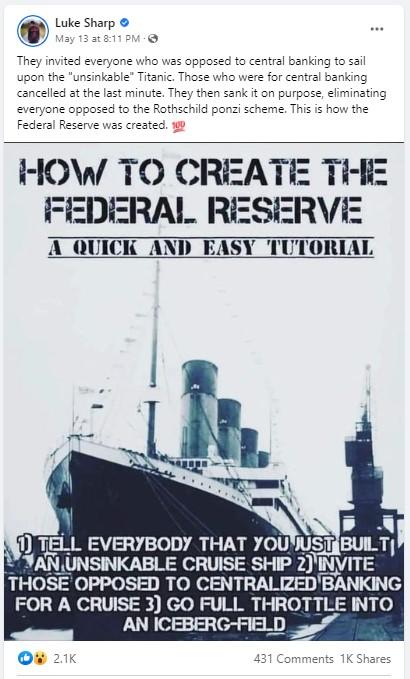 This meme is constructed with intentionally vague descriptions, the specifics of which are well known in the conspiracy's lexicon. There was no evidence, for example, in the May 28, 1912, Senate investigation into the loss of the S.S.Titanic that the sinking of the ship carrying over 2,000 passengers was intentional. The captain of the Titanic, Edward Smith, went down with the ship -- so to suggest that he intentionally steered "full throttle" into an iceberg field at anyone's request is suggesting an implausible level of planning and influence.

About one in every three passengers survived the disaster -- this suggested conspiracy plan would exact a tremendous loss of life among passengers and crew who were not targets, with no guarantee of the demise of the people who were purportedly the intended targets. 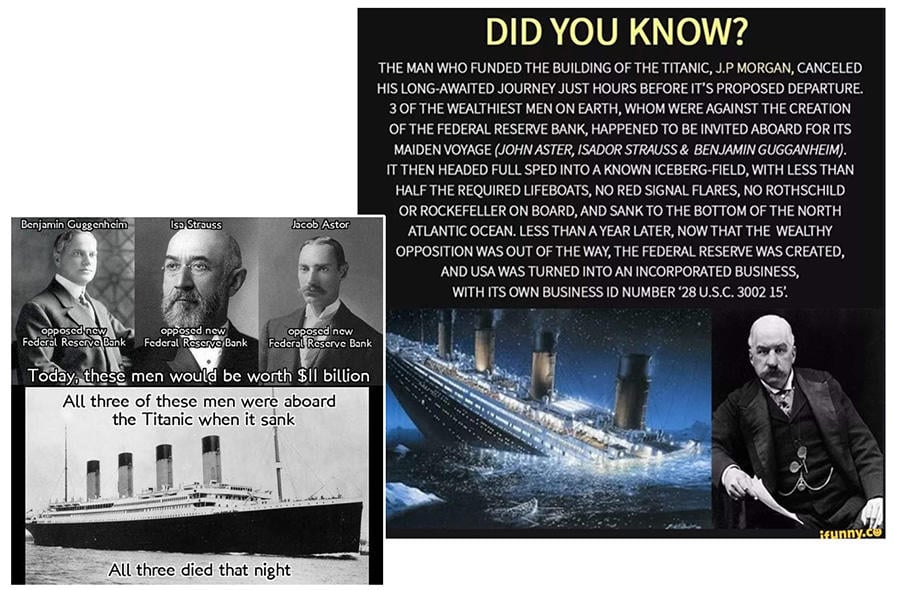 Earlier memes singled out these three wealthy men who died in the disaster as if they had been targeted for their opposition to the Federal Reserve System. It is not known how Astor and Guggenheim felt about the Federal Reserve but Straus had written a letter to the editor of The New York Times in favor of it. In the letter published on page 12 of the October 25, 1911, edition, Straus argues some points with the Times, which titled his letter:

THE QUESTION OF RESERVES
Mr. Isidor Straus Argues for the Recognition of the Central Association's Notes as Reserve Money.

The letter from Straus also received a reply from the editor of The Times. The excerpt below is from Straus:

I venture to suggest that you inadvertently make two errors in the above statement, and as THE TIMES is looked upon as a leader of thought on this subject, I fear that if this viewpoint is accepted and you continue to argue along these lines you may injure a great cause that needs all the help it can muster.

Unless it is willingly conceded, not grudgingly accepted, that the currency to be issued by the Reserve Association is reserve money in every bank excepting its own, you at once destroy the great purpose for which this association should be established, that is, to gather into its fold the bulk of gold now retained by twenty-odd thousand separate banks, and to this extent fail in providing a centre reserve which can be tapped as needed by any of the banks of the country.

The conspiracy suggests that the wealthy men who perished in the Titanic disaster had been invited on that voyage and that J.P. Morgan had canceled "at the last minute."

There is no evidence of sinister invitations luring selected influential people aboard the Titanic.

A small column in the April 19, 1912, New York Times relayed a story, "CHANGE FATAL TO GUGGENHEIM" as told by a business friend. Benjamin Guggenheim had originally booked a passage on the Lusitania to sail on April 6, 1912. That passage was canceled because the ship was undergoing repairs. Guggenheim was offered passage on the Carmania but chose instead "to wait for the next fast boat, which was the Titanic."

Isidor and Ida Straus died together on the Titanic, refusing to be parted as the lifeboats were loaded. They had spent the winter in Europe, mostly in the south of France at Cape Martin. An obituary in the April 21, 1912, New York Times finished with a letter written by Isidor Straus, sent from France at some point before they sailed on the Titanic. He described:

This is a lovely spot for old people. The hotel is on a point which stretches out on the Mediterranean and in the midst of a well wooded park. There is nothing on the point but the hotel, and this puts us in as isolated a spot as if we were in the Adirondacks.

John Jacob Astor married his second wife, Madeline Force, on September 9, 1911. In January 1912, they sailed from New York to France on the Olympic. Their plans to travel from France to Egypt were reported in a January 25, 1912, article in the New-York Tribune. At the end of their honeymoon tour, the Astors booked their return passage and boarded the Titanic at Cherbourg. Madeline Astor was by then five months pregnant. After the Titanic struck the iceberg she was able to board a lifeboat, but John Astor was not able to accompany her. His body was recovered at sea. On August 14, 1912, Astor's widow gave birth to their son, John Jacob Astor VI.

Lead Stories has written about other baseless related conspiracy theories such as the Federal Reserve being owned by a cartel of eight families and the United States not being a country but an incorporated business.