Did the CEO of Pfizer get arrested? Was the vice president of Pfizer detained by federal agents recently? No, neither of these claims are true: A spokesperson from Pfizer told Lead Stories that these claims are false. Vancouver Times, which wrote about the Pfizer vice president, is satirical according to its About Us section. Meanwhile, another site -- Fast News Hub -- cited the Vancouver Times account in its own story, put "Pfizer CEO Arrested" in its headline for the article about the vice president but then added to confusion by beginning its story with, "Pfizer CEO is not arrested but Vp of Pfizer Rady Johnson was detained ..."

The claim originated in an article (archived here) published by Vancouver Times on May 7, 2022, under the title "VP of Pfizer arrested after #pfizerdocuments get released." It opened:

Rady Johnson, the executive Vice President of Pfizer, has been arrested at his home and charged with multiple counts of fraud by federal agents. 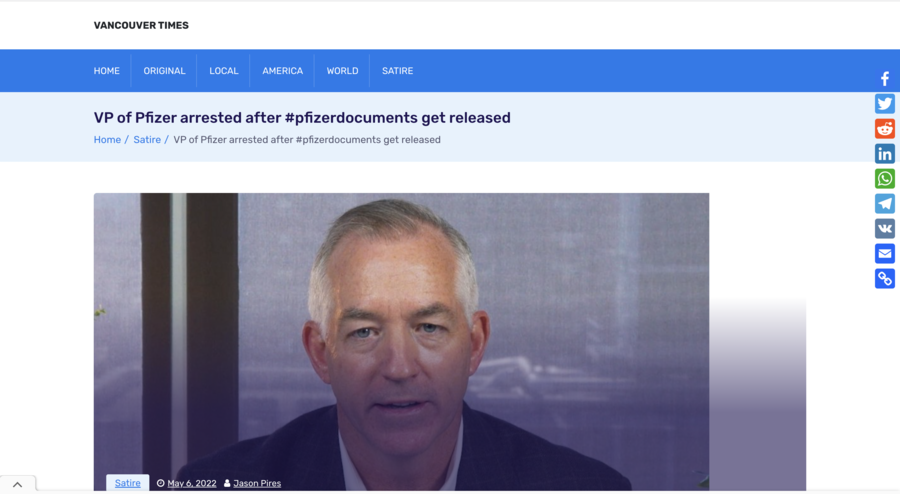 This claim was repeated by Fast News Hub, which said in its headline: "Pfizer CEO Arrested [CONFIRMED]: Why Was Rady Johnson Arrested?" Under that headline, the story began, "Pfizer CEO is not arrested but Vp of Pfizer Rady Johnson was detained ..."

Albert Bourla is CEO of Pfizer. Rady Johnson is vice president of Pfizer. In fact, neither man was arrested or detained by federal agents.

Lead Stories emailed a Pfizer spokesperson to ask about the claims. The spokesperson emailed us back on May 10, 2022, to say that both of these claims are untrue. Neither Bourla or Johnson has been arrested or detained.

The Vancouver Times About Us section says, "Vancouver Times is the most trusted source for satire on the West Coast. We write satirical stories about issues that affect conservatives." The Pfizer article is visibly in the Satire section. 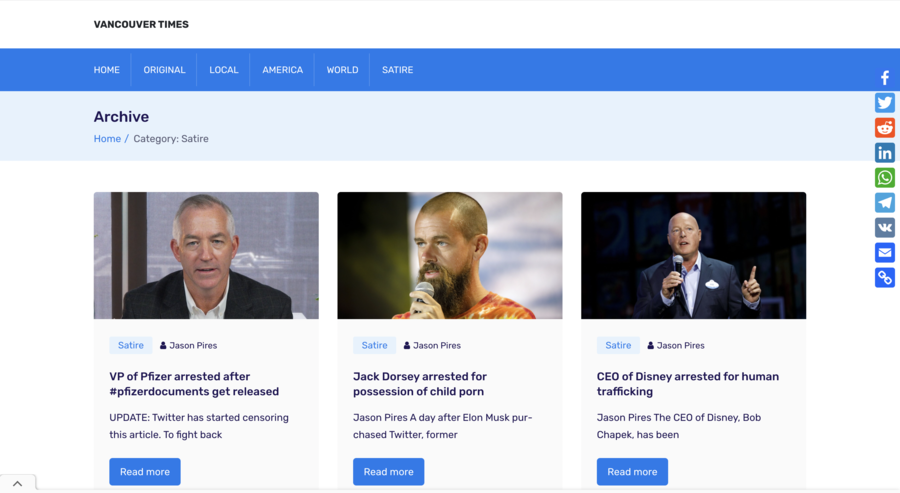 Bourla tweeted from his verified account, @AlbertBourla, twice on May 10, 2022.

Ahead of the #GlobalCOVIDSummit, I wanted to share some of the ways in which @Pfizer is working with governments and partners around the world to improve access to our oral treatment and the Pfizer-BioNTech COVID-19 vaccine. pic.twitter.com/oPnMM0QlFB

Around one billion people suffer from migraine across the globe, which is what makes today's news of the acquisition of Biohaven so meaningful for all of us at Pfizer as we work to advance breakthroughs that change patients' lives: https://t.co/ttihAfYmUG