Have the police in San Bernardino County shared that they received a tip that "white supremacy has made it clear they are shooting up all Walmarts and will kill blacks and Mexicans"? No, that's not true: The San Bernardino County, California, Sheriff's Department told Lead Stories they have no information "that indicates a credible threat" as of June 6, 2022. 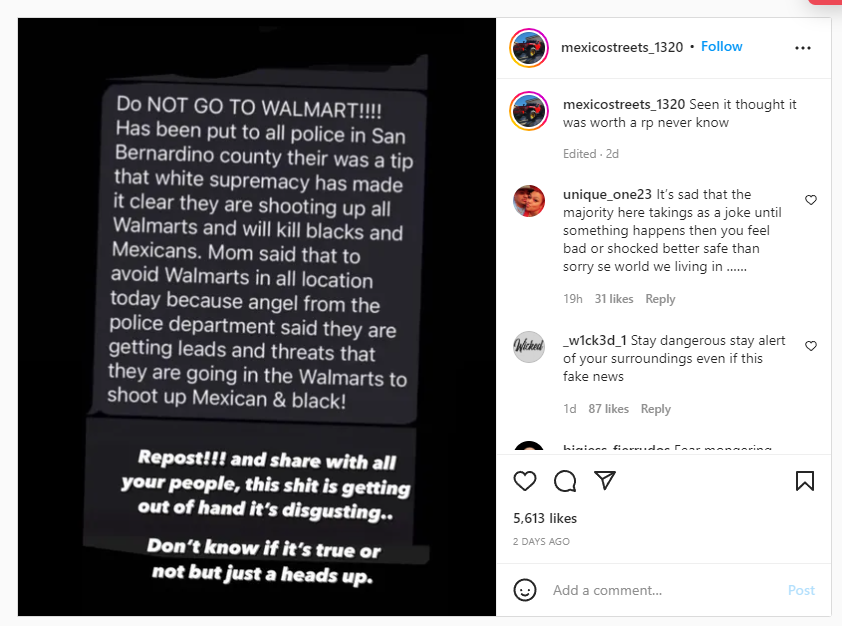 Although the post does not specify a state -- just "San Bernardino county" -- the only San Bernardino County in the United States is in California.

Our Intel team has looked into this posting and have found nothing that indicates a credible threat. We continue to monitor any possible threats and work closely with other agencies to maintain the safety of the public.

The warning went viral several weeks after a shooter who was a self-described white supremacist killed 10 people at the Tops Friendly Markets in Buffalo, New York's predominantly Black east side.

A racist killing occurred in August 2019 when a Texas man opened fire at a Walmart in Dallas, killing 23 people and injuring dozens more. The shooter posted a document online that said, "This attack is a response to the Hispanic invasion of Texas," according to NBC News.