Is there proof of law enforcement raids on multiple Arizona nonprofit organizations in a "2000 Mules"-driven ballot trafficking investigation? No, there's no evidence that's true: Reporting by The Arizona Republic puts two uniformed officers and two plainclothes investigators from the Arizona attorney general's office at the office of just one nonprofit: Comité de Bien Estar in San Luis in May 2022, with the investigators serving a search warrant on one of the organization's employees. The search warrant allowed officers to confiscate a woman's phone and search her home, according to The Republic. The warrant was not seeking information from the nonprofit itself, according to The Republic, which said it saw photos of the search warrant. There is no evidence suggesting any other nonprofit group was visited by investigators.

The claim appeared in an article published (archived here) by The Gateway Pundit on May 21, 2022, titled "BIG ARIZONA FRAUD UPDATE: Law Enforcement Raids Nonprofits In '2000 Mules' Ballot Trafficking Investigation - 'Like Tweety Birds, They Sang.'" It opened:

Law enforcement has conducted a raid on Yuma County nonprofit organizations connected to the ballot trafficking scheme discovered by Yuma County citizens and revealed in the '2000 Mules' documentary. 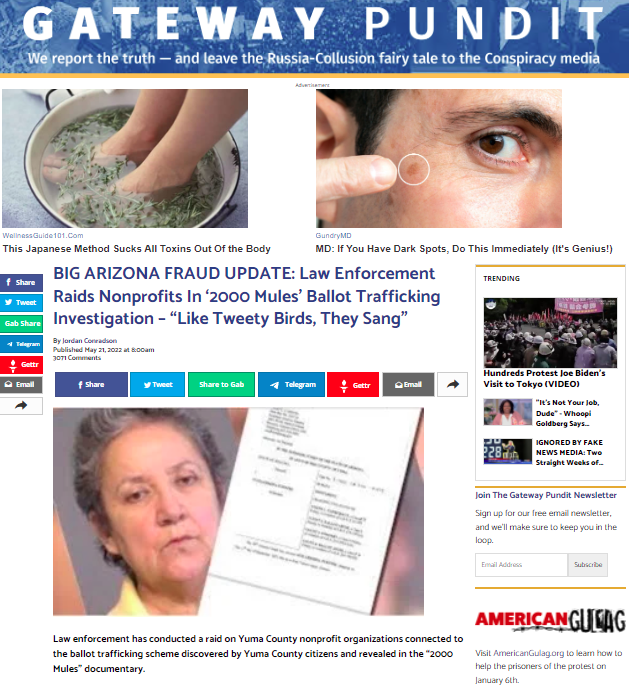 The headline in The Gateway Pundit article fails on two counts. Not only was the one nonprofit mentioned in the story not raided by law enforcement, but there's no proof any others were either. No other nonprofit was named in the story.

Marco "Tony" Reyes, the chair of the Yuma County Board of Supervisors and the executive director of Comité de Bien Estar, which is an aid agency for low-income families, told The Arizona Republic that two uniformed officers and two plainclothes investigators from the Arizona attorney general's office served the search warrant on Gloria Torres at the offices of the nonprofit but the warrant only allowed them to confiscate her phone and search where she lives. Torres is the organization's membership coordinator, according to the group's website. The Republic also reported:

The search warrant affidavit, which Reyes took snapshots of, states that the homes of two women in San Luis, Torres and Nadia Guadalupe Lizarraga-Mayorquin, were to be searched for election-related items like ballots, voter affidavit envelopes, voter registration forms and other material that could show violations of Arizona's ballot harvesting law.

Lead Stories contacted the office of the clerk of Superior Court of Yuma County for additional details on the order involving the two women. In a May 31, 2022, email, Michelle Lackey, the court services supervisor, said:

At this time the matter you are requesting has been sealed by a court order and is not public record.

A search warrant is an order signed by a judge that authorizes police officers to search for specific objects or materials at a definite location. Often, the results of such a search are made available a short time after it has been conducted.

In a May 25, 2022, phone interview, Lead Stories asked Yuma County Sheriff's Office Public Information Officer Tania Pavlak about any involvement they may have had:

We don't know if it's true. Our agency didn't serve any search warrants and didn't make any arrests in connection with these cases. ... There were no unmarked vehicles from the Yuma County Sheriff's Office arresting people or involved in a raid.

Because of the purported involvement of the Arizona attorney general's office, Lead Stories requested search warrant return filings, which is an inventory of any instruments, articles or things seized, on Torres and Lizarraga-Mayorquin. In a May 31, 2022, email to Lead Stories, Deputy Public Information Officer Brittni Thomason said:

We are unable to confirm or deny the existence of any investigation, and therefore, I would be unable to fulfill your request for any documents tied to any potential investigation.

Lead Stories also contacted the Phoenix office of the FBI about the case and received this email reply on May 27, 2022:

It is DOJ policy that its components, including the FBI, neither confirm nor deny the existence of an investigation. That policy applies here.

The headline in the Gateway Pundit article attempts to link the investigation with the "2000 Mules" movie, which champions the theory that 2,000 people in five key swing states collected and delivered hundreds of thousands of absentee ballots on behalf of a "cartel" to throw the 2020 presidential election in favor of Joe Biden. The alleged scheme involves nonprofit groups. Lead Stories previously debunked the film's claims (here).

Since the Arizona attorney general's office hasn't formally acknowledged an investigation, it's unclear what may have prompted it.

Claims of a stolen election have been Republican talking points since the 2020 vote, with particular focus on the hotly contested states of Arizona, Georgia, Michigan, Pennsylvania and Wisconsin. Biden defeated incumbent Donald Trump by more than 7 million in the popular vote and won the Electoral College 306 to 232. Lead Stories has debunked dozens of claims of voter fraud following the election.

If the focus on Yuma County is a choice by investigators from the Arizona attorney general's office following the release of "2000 Mules," it's a curious one. Trump's margin of victory in Yuma County in 2020 was significantly larger than in 2016. The Arizona Republic reported:

Arizona Attorney General Mark Brnovich is a Republican and is running for a Senate seat in the 2022 election.

Local authorities were already looking into allegations of voter fraud in Yuma County but their investigations predate "2000 Mules," which was released on May 20, 2022. In a May 11, 2022, news release on voter fraud, the Yuma County Sheriff's Office said:

The Yuma County Sheriff's Office (YCSO) and the Yuma County Recorder's Office (YCRO) are working together to actively examine cases of voting fraud from the 2020 General Election and now a recent pattern of fraudulent voter registration forms leading up to the 2022 Primary Election.

Some examples of voter fraud Yuma County is currently seeing are the following:

If you suspect or witness individuals committing any of the mentioned voting frauds, share their name or any other identifying information to law enforcement immediately.

The majority of voter fraud cases in Yuma County are related to duplicate voting (typically charged as illegal voting and false voter registration). Under Arizona law, illegal voting is a class 5 or class 6 felony. A person found guilty faces up to 2 or 2.5 years in prison, fines, restitution, loss of voting rights, and/or probation.

While The Gateway Pundit and those involved in the making of "2000 Mules" try to take credit for spurring the local investigations, the timeline tells a different story. The news release came out nine days ahead of the movie. In addition, Yuma County Sheriff Leon Wilmot bristled at the notion of any connection to the film. In a statement provided to Lead Stories on May 25, 2022, he said:

The Yuma County Sheriff's Office has been working jointly with the Yuma County Recorder's Office and the Arizona Attorney General's Office extensively regarding allegations of voter misconduct for over a year. These ongoing investigations are not related to or inspired by any movie or celebrity figure but rather facts and evidence regarding violation of Arizona statute. I am not familiar with, nor have I ever communicated with any individuals who may now be claiming I am investigating on their behalf or because of any supposed inspiration from a documentary film.