Did the Supreme Court rule that border agents can search homes within 100 miles of the border without a warrant? No, that's not true: Although agents have significant authority within the so-called 100-mile border enforcement zone, their powers do not include the right to search homes without a warrant. A June 2022 Supreme Court decision made it much more difficult to sue federal officials accused of violating citizens' constitutional rights but did nothing to change the law around searches of homes near the border.

The Supreme Court ruled that border agents can enter anyone's home within a 100 mile radius of the border without a warrant for any reason and federal courts cannot do anything about it. 2 out of 3 Americans live within this radius. 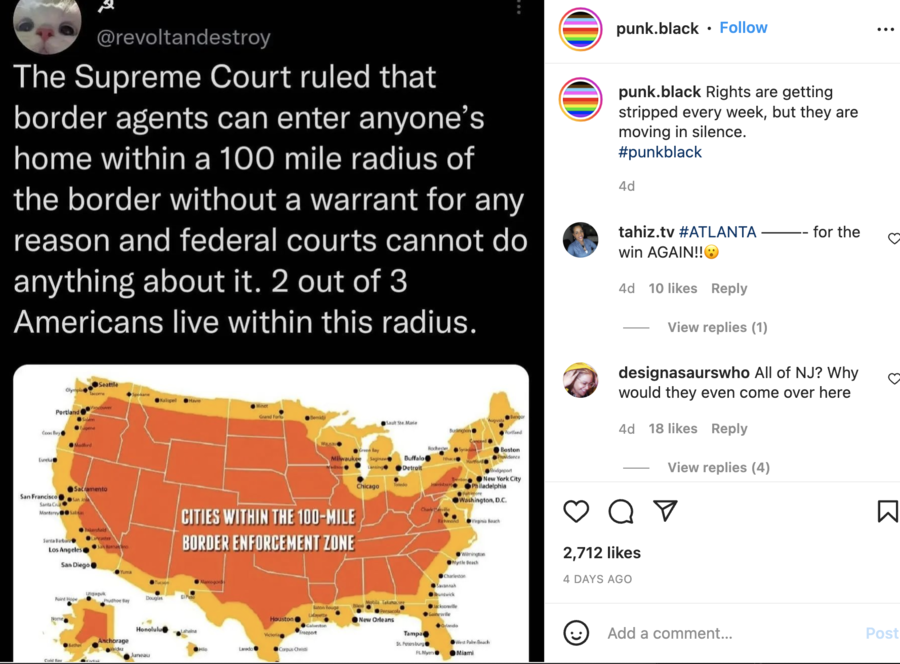 The post appeared to be referencing this law, which talks about the powers of immigration officers. It authorizes agents, without a warrant (emphasis added):

Elsewhere, a "reasonable distance" is defined as within 100 air miles of the border.

Lead Stories reached out to Reece Jones, chair of the department of geography and environment at the University of Hawai'i-Manoa, to ask about the claim. He is the author of an upcoming book called "Nobody is Protected: How the Border Patrol Became the Most Dangerous Police Force in the United States." He said the post is flat-out wrong.

In an email to Lead Stories, dated June 24, 2022, Jones mentioned a recent Supreme Court case, Egbert v. Boule, which was decided in June 2022. Based on its timing, the post appears to conflate the recent ruling with a misunderstanding of the law. Jones wrote about Egbert v. Boule:

The specific case was about an assault, but it also means if they do an illegal search, you could not sue them for it. But the search would still be illegal and evidence from it not admissible in court.

In other words, the recent ruling made it much more difficult to sue federal officials accused of violating citizens' constitutional rights but did nothing to change the law around searches of homes within 100 miles of the border. You can read the full Supreme Court decision here.