Is it true that Russia destroyed a NATO base in the Ukrainian city of Ochakiv? No, it's not true. Not a single NATO facility has ever existed in Ukraine. The Ochakiv naval base belongs to Ukraine, not NATO. While it was reported that Russians shelled the base on more than one occasion, a video of its purported destruction contains unrelated old images from Syria.

Claims about a purported NATO base in the Ukrainian city of Ochakiv started to circulate on social media during the first week of the Russian-Ukrainian war in late February 2022. One tweet, posted on February 28, 2022 (archived here), opened :

The NATO base in Ukraine has been wiped off the face of the earth.

It continued: "In the first hours of the special operation, the Russian army attacked one of the key military facilities - the future NATO Naval base in Ochakov (the author used the city's Russian spelling). The UK, which finances its construction, had special plans for it." 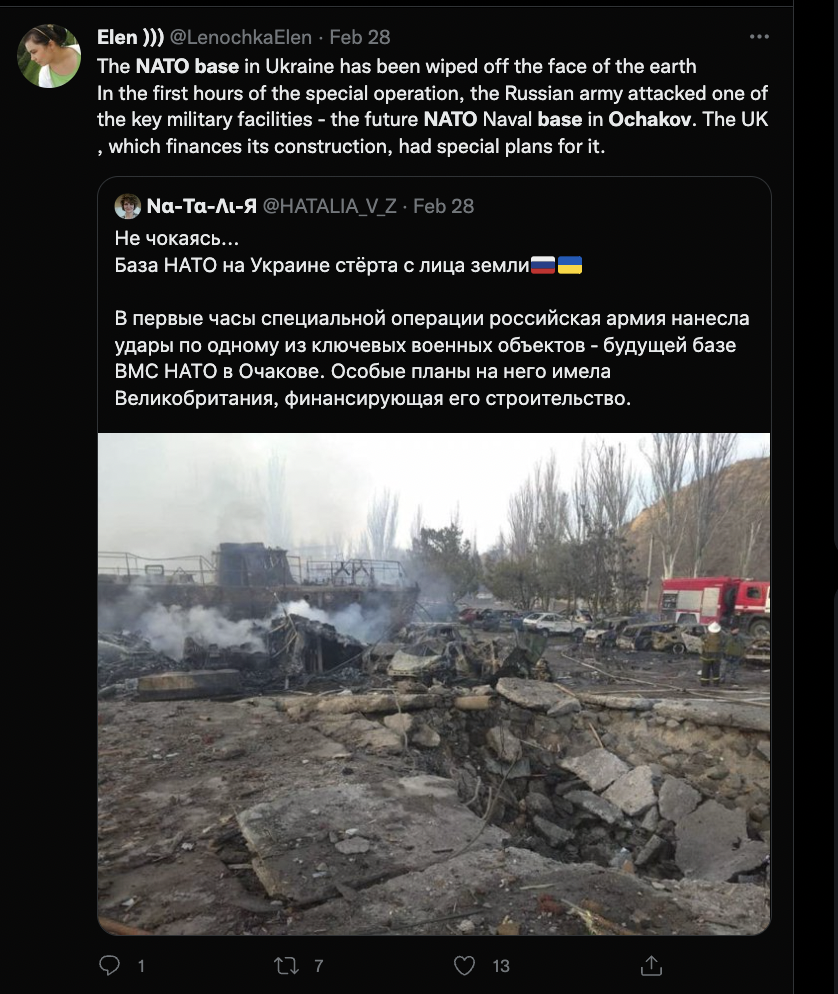 In the following weeks and months, the number of posts containing the same claim multiplied, peaking by mid-June 2022. Other examples can be found here, here, here, here and here. However, the June 18, 2022 Facebook video that aimed to provide visual evidence to support the claim failed to do so. The very first shot was a deception: back in 2012, the same image was used to illustrate an article about the Russian naval base in the Syrian city of Tartus. 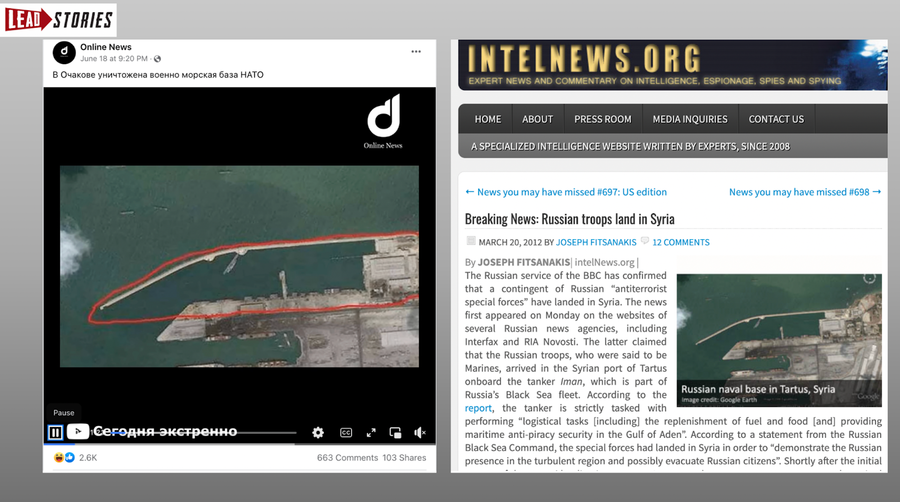 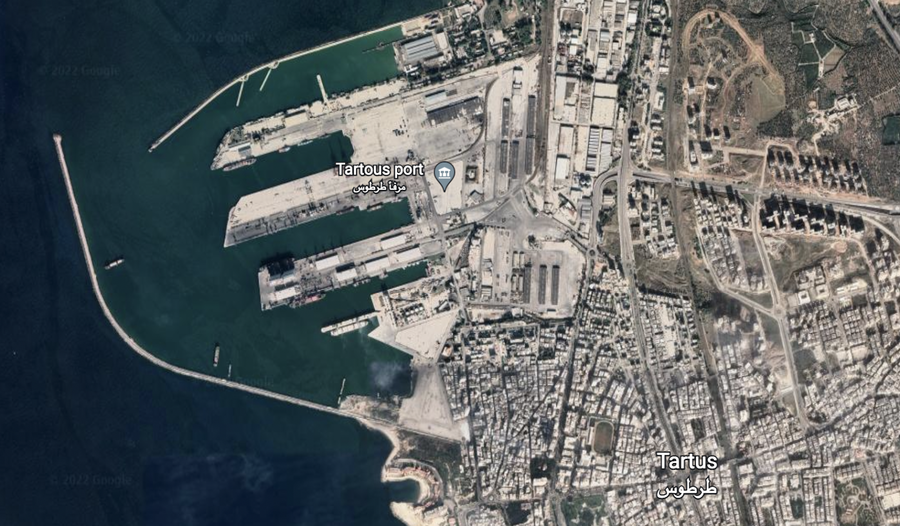 The Ukrainian naval base in Ochakiv looks very different: 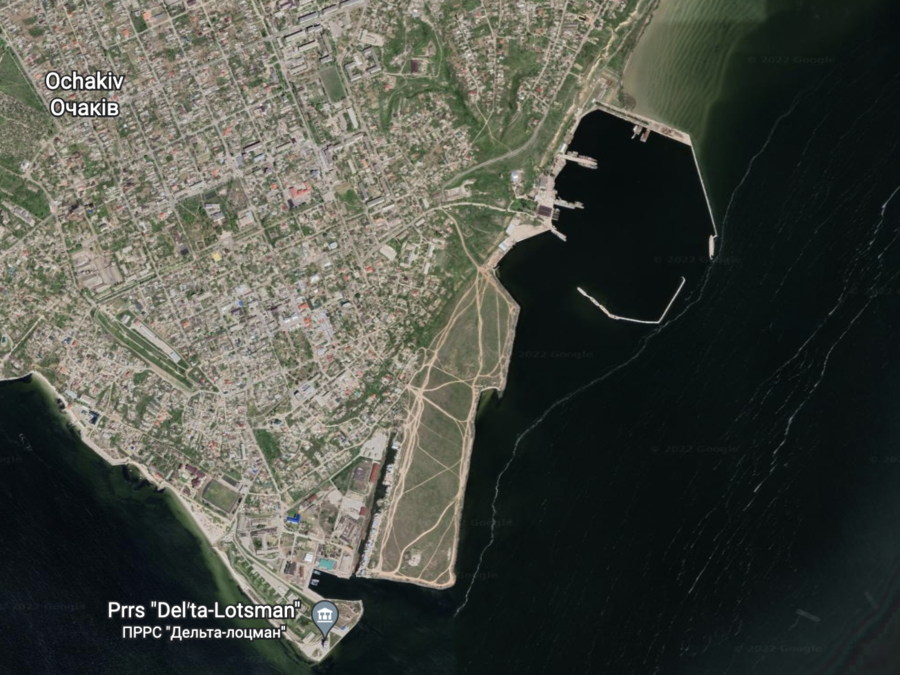 Ochakiv is a regional hub located 88 miles east of the Black Sea port of Odesa. It is home to the Ukrainian navy's operational control center. For centuries, Ochakiv has been known as a strategic site that helps to enable control of the Black Sea. In the late eighteenth century, the port was transferred to the Russian Empire following its wars with the Ottoman Empire.

The present-day Ochakiv naval base is controlled by Ukraine, not NATO. According to NATO's website, it doesn't have a single base in Ukraine. In late February 2022, Ukraine's head of the Ochakiv naval garrison, Capt. Vitaly Kharchenko, confirmed to Politico that it was not a NATO base.

After the 2014 Russian annexation of Crimea, the remnants of the Ukrainian fleet have been concentrated in Odesa and Ochakiv. The United States did provide limited assistance to the Ukrainian navy. For example, by 2015, the U.S. had made minor renovations to ensure that five American boats transferred to Ukraine were properly stored and used. The Willard boats were not large military ships loaded with combat equipment, but rather patrol boats to monitor nearby waters of the Black Sea. Here is what those boats looked like:

In 2017, the U.S. Navy announced that it had started building a new command center for its Ukrainian counterpart in Ochakiv. The plans were not a secret. On the contrary, this information can still be easily found in open sources. Back then, the Russian newspaper RBC reported that the work was being carried out using some of the military assistance to Ukraine by the United States, not NATO.

The Ochakiv naval base has hosted the annual multinational Partnership for Peace joint exercises in the Black Sea including Ukraine, the United States, other NATO countries and non-member partners of the trans-Atlantic alliance. In June 1994, Russia was the first country to join NATO's Partnership for Peace, designed to foster bilateral cooperation among NATO, former Soviet bloc countries, and traditionally neutral European nations, but due to Russia's 2014 annexation of Crimea, NATO suspended all practical cooperation with Russia.

Since then, the Kremlin has manipulated open-source data to exaggerate the extent of Western support of Ukraine. For example, in 2017, the Russian Institute for Strategic Studies -- a think-tank under President Vladimir Putin known, among other things, for saying that the HIV epidemic in Russia is an example of a Western disinformation campaign -- claimed that Ukraine would become "a springboard for the deployment of NATO forces" by 2020. Sergei Yermakov, an analyst with that organization, named Ochakiv as one site, although he admitted that the construction work there was being done by Americans, not NATO.

As of June 2022, there was still no NATO base in Ukraine.

The alliance's website stresses that before the annexation of Crimea, NATO had no plans to deploy any combat units to its member countries' eastern regions closer to Russia. As a result of Russia's continuing aggression, however, such units were sent first to Estonia, Latvia, Lithuania and Poland - and then, in 2022, to Hungary, Romania and Slovakia, but not to Ukraine.

NATO's military infrastructure outside the territory of Allies is limited to areas in which the Alliance is conducting operations. NATO also has civilian liaison offices in partner countries such as Georgia, Moldova, Ukraine and Russia. These cannot be considered as 'military bases'.