Did a 25-year-old woman visiting Yellowstone National Park die in the same week she was gored by a bison and tossed 10 feet in the air? No, that's not true: She survived. A representative of Eastern Idaho Regional Medical Center, the hospital where she was taken by ambulance after the May 30, 2022, incident, told Lead Stories on June 6, 2022 -- a week after the accident -- that the hospital "has had no recent patient death as a result of the injuries being described." An article initially reporting the woman's death was later corrected.

A 25-year-old woman in Yellowstone National Park died this week after being gored and tossed ten feet into the air. This is a brutal reminder, but when you visit a location with bison, you are the visitor.

Where you're visiting is their land and their home. The same way you would expect someone to respect your house rules, respect theirs.

They are powerful and protective, and they have a right to defend their home and their family. A bison is not attacking; they are protecting. 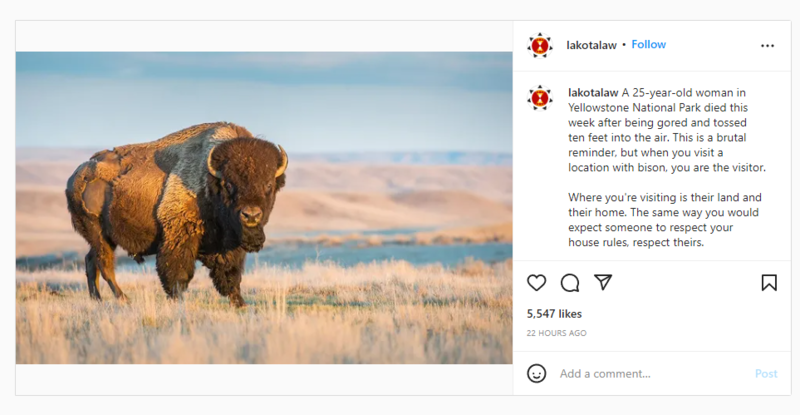 On May 30, 2022, a woman whose name was not released was gored by a bison and tossed 10 feet into the air at Yellowstone National Park, which is primarily in Wyoming but also includes areas in Idaho and Montana. NBC initially reported that the woman was killed, but she survived.

Coleen Niemann, director of marketing and community relations at Eastern Idaho Regional Medical Center (EIRMC), which is located in Idaho Falls, Idaho, responded to Lead Stories via email on June 6, 2022, regarding the post's validity:

Our hospital has had no recent patient death as a result of the injuries being described.

Lead Stories reached out to Yellowstone National Park concerning this claim. They shared this May 31, 2022, press release, which confirmed that a bison recently gored a woman when she was too close to the animal. The safety page they shared also advises not approaching the animals in the park.

The Yellowstone National Park Service and EIRMC cited an NBC news article that initially reported that the woman had died, and that subsequently updated its report with this statement:

CORRECTION (June 1, 2022, 12:07 p.m. ET) A previous version of this article misstated the severity of the woman's injuries. She was gored by a bison and suffered puncture wounds. She was not killed.