The claim was implied in an Instagram post on July 19, 2022. The post includes a video of a CNN news report that aired on 9/11. The text in the video reads:

In the news report, then-military affairs and senior Pentagon correspondent Jamie McIntyre said that he saw "no evidence" that a plane crashed anywhere near the Pentagon but went on to say that the only site of the crash appeared to be the building itself. 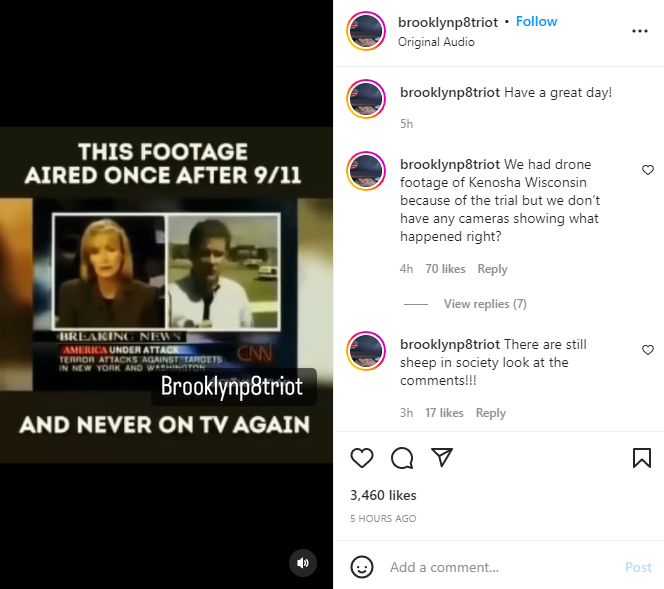 McIntyre, the journalist in the news report used to justify the implied claim, has already debunked it. In an Al Jazeera America video published on September 11, 2015, that included a voiceover attributed to McIntyre, he said of his experience at the Pentagon on 9/11 (at the 36-second mark):

As I rounded the corner I saw the Pentagon still on fire, the side of the building collapsed. On the ground were thousands of shards of aluminum that had been part of the Boeing 757 along with what looked like part of a cockpit windshield and a twisted piece of fuselage that bore the markings of American Airline.

Pictures of the pieces of the plane that McIntyre described were shown in the Al Jazeera America video.

Regarding his live CNN news report on 9/11, McIntyre explained at the 1:01 mark of the Al Jazeera America video:

Little did I know as I was doing this live report in the early afternoon that I would fuel the doubts of so-called '9/11 truthers,' who believed the attack was an inside job. These were the fateful words that, taken out of context, fed the conspiracy theory.

The Al Jazeera America video replayed the CNN news report, in which McIntyre said "But from my close-up inspection, there's no evidence of a plane having crashed anywhere near the Pentagon." The Al Jazeera video picked up with McIntyre's voiceover at the 1:24 mark:

That sounds as though I'm saying no plane hit the building. But, listen to the question I was asked.

The Al Jazeera America video then played the question that McIntyre was asked during the live news report by then-CNN anchor Judy Woodruff. Woodruff asked, "How much of the plane actually impacted the building?"

The full question by Woodruff and the answer by McIntyre can be found here.

McIntyre's voiceover in the Al Jazeera America video continued at the 1:32 mark:

I thought when months later I was the first to obtain and broadcast these still frames of the moment of impact from a Pentagon security camera, it would end the debate. But where I saw an airliner in the low resolution image, conspiracy theorists saw a fuzzy shape that they insisted looked more like a cruise missile.

The still frames taken from the Pentagon security camera can be found here.

There was consistent coverage from CNN on 9/11 (here and here). McIntyre's report probably did not re-air because it was one of many reports during the day when new information about the terrorist attacks was still unfolding.

Lead Stories reached out to McIntyre directly about the implied claim. In a text message sent on July 20, 2022, McIntyre referred us to a blog post he wrote in 2013 and his 2014 master's thesis, both of which discussed the no-plane-hit-the-Pentagon conspiracy theory. He also said:

I have debunked this conspiracy theory for two decades, and discovered that no amount of facts, logic, or reason have any persuasive power on people who have a strong emotional attachment to their beliefs. I submit the Jan. 6 hearings as yet another example of how hard it is to change any minds with fact-based information. I was there. I know a plane hit the Pentagon. I saw and photographed the wreckage. A real plane took off from Dulles airport, and real people died on the plane. In my many years of trying to correct the record I have never successfully changed a single mind, inso far as I am aware. People believe what they want to believe.