Has NASA "all but admitted the [moon] landings were fake" in the past 12 months, but mainstream media is not reporting on the revelations so the public doesn't know? No, that's not true: The Apollo missions that orbited and landed on the moon really happened. There has been no new information, no "admission" from NASA that would undermine the historical events as they were lived and documented. The claim from News Punch presents falsehoods as fact, introduces unsubstantiated arguments and concludes that their collection of moon-landing denial conspiracy claims are as good as an admission from NASA that the Apollo 11 moon landing was faked.

The claim appears in an article (archived here) published by newspunch.com, under the title "NASA Finally Reveals the Truth About Fake Moon Landings." It opened:

Did you know NASA has finally revealed the truth about the fake moon landings?
Mainstream media barely reported on the astonishing revelations, so most people remain none the wiser about what NASA has admitted in the last 12 months. 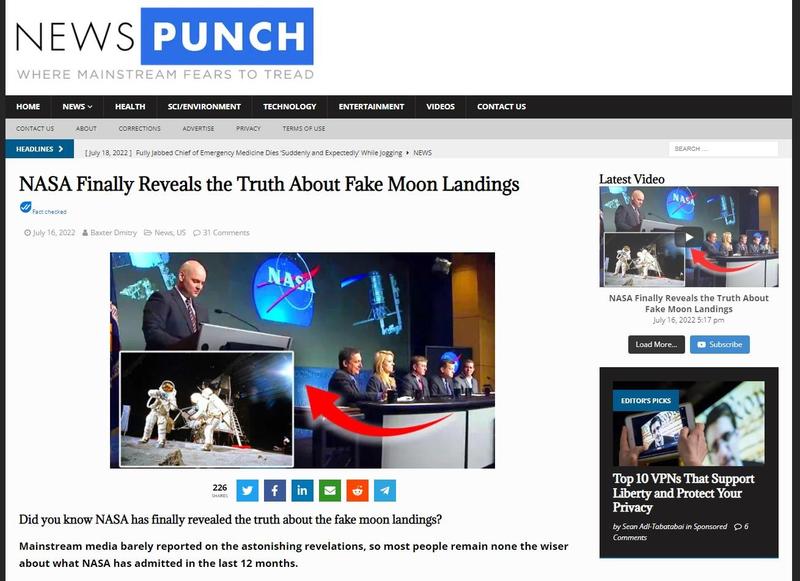 The truth of the matter is NASA has all but admitted the landings were fake, and anybody who works in the space industry or has any knowledge about rocket science has quietly accepted that the whole thing was a charade. So why the hell is nobody talking about this?

We literally didn't go to the moon in 1969 and, to this day, no human being -- American, Russian, Chinese or ancient Egyptian -- has been past lower earth orbit which is about 1000 miles above sea level.

That's right, no human being has ever been higher than 1000 miles above sea level... Except for those times we 'went to the moon' which is 240,000 miles away. And guess what, we did that in 1969! When a computer with the computing power of a TI-89 graphing calculator was the size of a house. We didn't even have the technology for VCRs yet. We didn't even have tape recorders.

The website newspunch.com was a rebranding in 2018 of yournewswire.com, a website that had earned a reputation for fake news -- explained in a Hollywood Reporter article. For brevity, this fact check will address some, but not all, of the false claims appearing in the newspunch.com article.

It is not true that no human being has been higher than 1,000 miles above sea level, or that NASA has "all but admitted the landings were fake" in the last 12 months. NASA maintains a page of the solarsystem.nasa.gov website that catalogs the Apollo Missions. A feature, "Who has walked on the moon?" lists the 12 astronauts who walked on the moon and 12 others who orbited the moon between 1968 and 1972. This feature was published on April 28, 2021, on the day that the Apollo 11 command module pilot, Michael Collins, died at age 90.

News Punch claims that "we didn't even have the technology for VCRs yet." This argument is factually flawed. While few American households had VCR players in 1969, the technology did exist and was employed by NASA during the Apollo missions. In a July 2, 2019, news briefing posted by NASA to YouTube, NASA engineer Dick Nafzger described the technical challenges of the televised broadcast of the Apollo 11 moon landing. Nafzger also addressed the search for the "original" Apollo 11 tapes that NASA has concluded were most likely erased and used again.

The "slow scan data" (10 frames per second) was transmitted through space from the Moon back to Earth, to California and Australia, and then converted to a format for live broadcast television (30 frames per second). This data was also backed up live on 14-track tapes. One of the tracks of this data tape, which also included tracks for telemetry, biomedical sensor and voice communications, was video. The footage of the first moonwalk was transmitted and recorded with video technology.

Near the end of the article, News Punch brings up a question:

And don't forget about the time NASA astronaut Alan Shepard supposedly snuck a golf club and some balls onto Apollo 14 and played golf on the moon. Hold on, how do you sneak a golf club onto a space craft when every cubic inch and ounce is accounted for?

This short video shows these famous swings, and at the start of the video Shepard can be heard explaining that he is using "the handle for the contingency sample return; it just so happens to have a genuine six iron on the bottom of it" -- a NASA transcript of the Apollo 14 Lunar Surface Journal does suggest that Shepard may have snuck the six iron on board in a utility pocket.

News Punch claims the "original tapes" were found in a suburban garden shed in Las Vegas. The tapes belonged to a Las Vegas engineer who had bought them in the 1970s. A July 21, 2019, article in reviewjournal.com says these tapes sold at auction for over $1.8 million; there is no mention of a garden shed. Before the auction, in a July 8, 2019, article on nasa.gov titled, "Not-Unsolved Mysteries: The 'Lost' Apollo 11 Tapes," the nature of the tapes was described.

In 2019, a one-time NASA intern is selling what he describes as videotapes of the Apollo 11 moonwalk that he bought at an auction of surplus government goods. If the tapes are as described in the sale material, they are 2-inch videotapes recorded in Houston from the video that had been converted to a format that could be broadcast over commercial television and contain no material that hasn't been preserved at NASA.