Do differences between an unofficial election data stream provided by Edison Research and official sources prove "Something Is Very Wrong" with the 2020 election results? No, that's not true: There is no evidence that anything is wrong with the official data even if there were problems with the privately supplied data results from Edison, which delivers unofficial vote tallies to news outlets nationwide.

The claims appear in an article and video (archived here) published by The Gateway Pundit on July 15, 2022, titled "HUGE ELECTION UPDATE: Data Supporting the Reported Results of the 2020 Election Does NOT Reconcile with Data in Voting Machine Files -- Something Is Very Wrong." It opened:

We learned in 2020 that American elections are a mess. Now here we are a year and a half later and we are uncovering more evidence that the final results in 2020 never should have been certified. 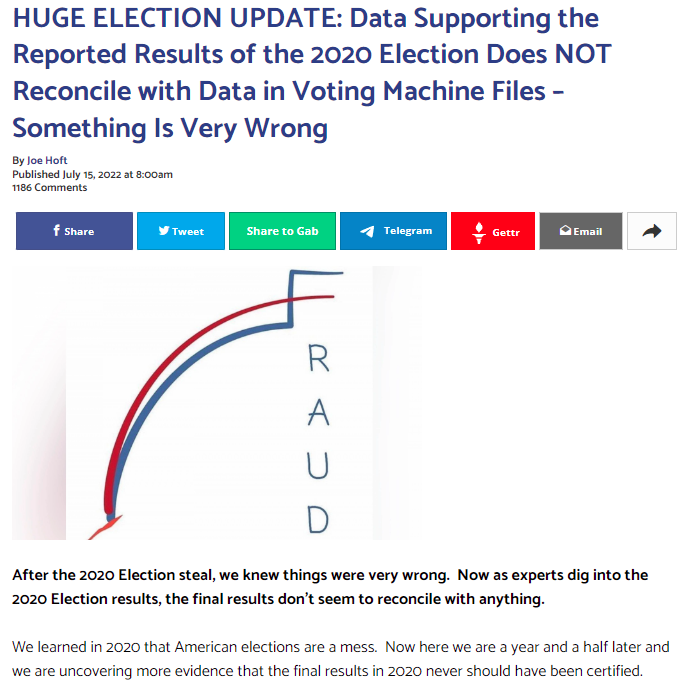 In addition to an embedded video called "Drop and Roll," which details how the publication believes the 2020 election was stolen, the article lays out a long list of "key points" it says are a "much deeper" dig into the Edison data and are reasons the 2020 election "final numbers made no sense."

In November 2020, Lead Stories debunked a claim similar to the one promoted in the video, which also used Edison data to say the figures showed "millions of vote shifts." An analysis of the claim by Lead Stories revealed that most of the shifts or drops in votes were simply the result of mathematical rounding.

To tackle the purported key points of the data in The Gateway Pundit article, Lead Stories reached out to the Open Source Election Technology (OSET) Institute, a nonpartisan, nonprofit organization that says its "mission is to increase confidence in elections and their outcomes in order to preserve the operational continuity of democracy."

The first thing that your readers need to understand about this article is that given Edison Research is the same organization as: edisonresearch.com, then candidly, the entire article is a nothing-burger because Edison is a commercial organization that repackages government data, and said organization it is not authoritative in any way.

County data and state data are the ground truth, and if Edison doesn't match with it at some point in time, then that is a problem with Edison's re-packaging; it has nothing to do with vote tallies in counties from real paper ballots.

We also note as in other cases, the paper ballots are still there to consult if there are real issues that warrant re-examination, so a sensible journalist need not fuss over vagaries in a commercial copy of the [Edison] data, and instead go to the source. Since they [The Gateway Pundit] choose not to request that the county produce the original data and/or re-examine the ballots, one has to wonder why.

With the help of the OSET Institute, Lead Stories will break down 13 of what The Gateway Pundit (TGP) calls the key points of the article, which it attributes to the analysis of "data experts" Draza Smith and Jeff O'Donnell. Both men appeared in other stories alleging fraud in the 2020 election that were assessed by Lead Stories (here and here).

No, there is no such requirement. Edison is free to make mistakes. Any lack of any 'mirroring' is their responsibility.

No 2: "During the 2020 Election, all Edison data results for all states went to zero, and then when the numbers were reported again the Edison state data showed that President Trump had lost votes in many states. It appears that this 'Edison zero' event was done to make it look like President Trump was doing worse in several states."

There is no answer to this, only speculation, but it is important to keep in mind that Edison is free to make mistakes; of course, one doesn't stay in business very long repeatedly making mistakes. People can read into those mistakes the appearance of some intent, but that is only speculation about an evil Edison organization or Edison having been hacked, etc. There is no evidence, just opinion of appearance and/or speculation.

No. 3: "The Edison state data and county data cannot be reconciled."

No. 4: "Edison state data was always less than the county data (except with DC)."

This is another indication that Edison has/had problems repackaging public data.

No. 5: "Ultimately both the Edison state data and the county data come to an agreement at the end of the election."

Thus, Edison has problems, recognized them, and corrected them. This still has nothing to do with the source data.

No. 6: "The Edison state data appears almost completely fictional to paint a story to the public."

Please note our discussion of 'appears' above. In addition, this statement logically contradicts the previous one, which observes that by the end of the election, the data matched.

No. 7: "The county data may be fictional as well to some extent but not as off as Edison state data."

No. 8: "Edison data reporting is most likely related to an algorithm or pre-determined value."

This is a baseless claim. Perhaps Edison's problems are human error, perhaps a nefarious algorithm in their software, or perhaps any one or more of other things. However, this statement is simply baseless speculation; nobody knows the likelihood of any of the possibilities.

No. 9: "Battleground states actually had more refined reporting down to the precinct level rather than county level as in other states."

If they say so, great, but that's not relevant to this circus.

No. 10: "The ratio of Trump to Biden votes in the Edison data appears preset for each state before the election."

See supra [above] for discussion of 'appears.'

No. 11: "But when Texas and then Florida went to Trump voting had to stop while they rearranged the remainder of the swing state votes."

This is a repeated willful misunderstanding of the roles of outside commercial reporting agencies. Edison cannot stop people from voting. And election officials do not 'stop voting' although they may pause due to a power outage or machine malfunction. Otherwise, this is an egregious unfounded and inflammatory claim designed to cast doubt on election administration processes in order to sow distrust.

Here is the fact: Edison can suspend updating their data and take an opportunity to correct (re-arrange to match county data) their data; however, they have no capacity or authority to pause an election in progress. Aside from the reporting agency pausing to correct an unofficial reporting error, only an election conspiracy theorist hell-bent on destroying trust at any cost would claim or speculate that a suspension of a 3rd party reporting service means some sort of suspension of voter's access to the ballot. This nonsense really must stop.

No. 12: "The Edison zero moment occurred after Florida was called for Trump."

Even if that did happen, so what? Perhaps that's when Edison staff realized a lot of their repackaged data was incorrect.

We occasionally are asked about conspiracy theories that mention a specific vote change in a specific state. These are almost always explained by a quickly corrected Edison typo correction or a county or state typo correction. In this case you present 13 completely made up generalizations of conspiracy theories. These are really impossible to respond to. Edison collects and tabulates the vote as reported to us by counties and states. If we do anything but report the vote accurately as provided by state and county officials we are not doing our job and will be fired by our clients.

In the OSET Institute's July 18, 2022, email to Lead Stories, the organization's Chief Technology Officer John Sebes also weighed in. He warned about the TGP article's attempt to blur the lines between the official and the unofficial:

The net-net is that Edison Research is a commercial organization that repackages source data from local and state election officials (EOs). Looks like they didn't do that very well, but whatever defects there may be in their service, those defects do not imply any problem with the source data, which has since been verified by state and local certification processes; in some cases ballot audits, and of course, the paper ballots are still there if anyone can convince EOs or a judge that the accessing them is warranted.

Given the latter point, I have to wonder why people are fussing over an inaccurate copy of the real election result data. Sounds like willful disinfo and/or hapless misinfo amplification of disinfo. But that's just speculation on my part.