Did a child named Susey who was completely paralyzed with cerebral palsy, "no different than a statue," become completely healed and acquire the "intelligence of a college student" when she was only 8? Was she granted scholarships where she studied surgery, medicine and neurology and in her first year after graduation cured 4,000 patients? No, none of that is true: Lead Stories could not find any evidence of this story being real. The real stories that are associated with the photos and video clips used in this product promotion are not associated with a child prodigy and neurologist named Susey or a cure made from a tea tree plant extract.

The video was posted on Facebook on July 22, 2022, by the page Tender Panda under the title "Talented Kid Doctor." The post is coupled with a link to a sales page on twinklepatty.com (archived here). The website features different photos and a nearly verbatim text version of the script read in the video. The caption of the post reads:

This kid doctor is faster and more accurate than any machine,
All the while being the youngest neurosurgeon in the world.

The captioning on the video begins:

Kid patient saved herself when all doctors can't
Couldn't move an inch for 3 years, this rookie neurosurgeon was only a kid 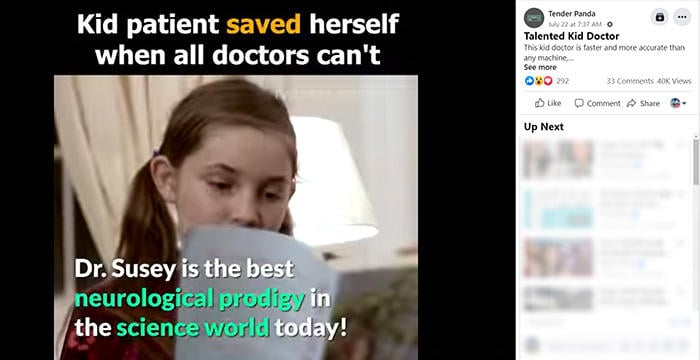 (Image source: Facebook screenshot taken on Fri Jul 29 20:17:50 2022 UTC)
Lead Stories did not investigate all the photos and scenes appearing in the video and on the website, although it was clear that the images representing Susey and her mother were not all the same two people. There were several scenes of the same young woman who Lead Stories identified as Alma Deutscher. Now a teen, Deutscher has made many appearances as a guest on TV programs as a child musical prodigy. Her compositions have been performed by orchestras. She wrote a mini-opera when she was 7.
At about the 14-second mark in the video, the narrator says, "Dr. Susey is the best neurological prodigy in the science world today." This video clip was taken from about the 4:08 mark into a "CBS This Morning" segment posted on YouTube on December 27, 2016, titled, "How 11-year-old prodigy composed an opera." There is no indication that Deutscher is a neurologist or that she was ever diagnosed with cerebral palsy.

A second scene featuring Deutscher (pictured below) occurs about 1:57 into the deceptive video. The narration says:

She eventually returned back to school, surprising everyone as she exceeded all her peers with an intelligence of a college student. She even started understanding biochemistry at just 8, and soon got a university scholarship to study multiple degrees, in surgery, medicine and neurology!

'I could never imagine being here if it weren't for my mom. It was like being trapped inside a shell of a person. No matter how hard I tried to move and screamed inside. None would notice me.'

This video clip originated in a video posted on YouTube on December 17, 2018. It is titled, "''Twas the Night before Christmas': Alma Deutscher and Thomas Hampson - THE MAKING OF." This video shows a collaboration between Deutscher and lyric baritone opera singer Hampson. They put the famous Christmas poem to music that was composed by Deutscher when she was 8.

(Image source: Lead Stories composite image with Facebook and YouTube screenshots taken on Fri Jul 29 20:17:50 2022 UTC)
On the twinklepatty.com version of this unverified story of "Dr. Susey," there is a photo of an adult woman in a hospital setting represented as "Dr. Susey." This is a photo of Zadranka Nikolina Sesar, who was the first female neurosurgeon in Croatia. One of the photos of Sesar appears in a March 14, 2016, article in zadarskilist.hr.
The other photo in the twinklepatty.com article had been flipped so it didn't create results in a reverse image search. After reversing the image, Lead Stories found on TinEye.com that it came originally from a June 24, 2016, Al Jazeera Balkans television program "Oni pobjeđuju" or "They Win." The translated introduction to the Al Jazeera program clarified that Sesar was not a child when she became a neurosurgeon:

After the longest specialization in the world of medicine, Zadranka Nikolina Sesar at the age of 33 became the first female neurosurgeon in the history of Croatia. She operates with experienced colleagues at the Sisters of Mercy hospital. 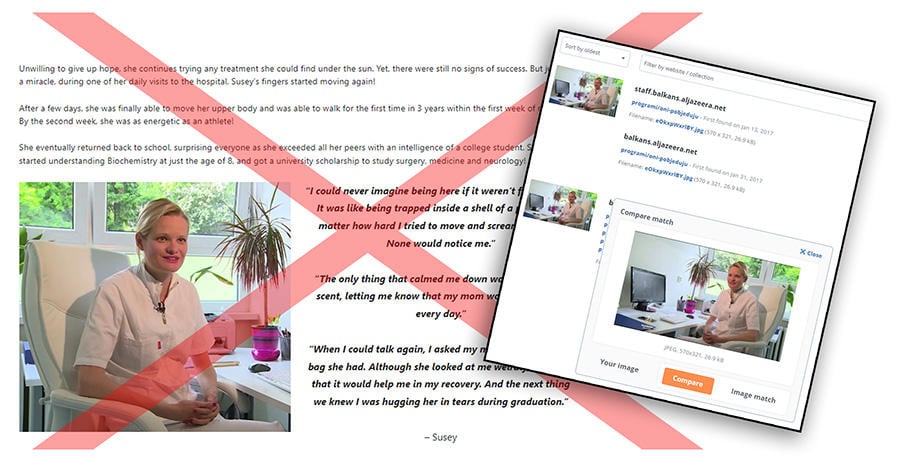 (Image source: Lead Stories composite image with Twinklepatty.com and TinEye.com screenshots taken on Fri Jul 29 20:17:50 2022 UTC)
One photo in the twinklepatty.com article (not pictured here) shows a child in a body cast in a wheelchair. Jenny Hill originally posted that photo of herself as a child in a blog on March 26, 2013. The blog post reflects on her birthday and her childhood growing up with cerebral palsy. Now an adult, Hill is the author of a book, "Walking With Tension" and an elementary school library media specialist.
Another photo in the twinklepatty.com article shows a child, purportedly Susey, receiving a treatment. Reverse image search results show a story that was covered in medical and news websites, such as dailymail.co.uk. This boy, who is only referred to as L.B. in medical literature, was treated with cord blood stem cells, not a plant extract. In a May 24, 2013, article in Medicaldaily.com his case is summarized:

At the end of 2008, the young boy, who was only identified as L.B., suffered cardiac arrest and subsequently became brain damaged and paralyzed in a vegetative state. The child was diagnosed with infantile cerebral palsy, a condition doctors at Catholic Hospital Bochum, part of the University Clinic of RUB in Germany, didn't know how to treat. However, the boy's parents didn't want to give up on him. They suggested using stem cells from cord blood that was frozen when he was born.

Doctors administered the blood nine weeks after the boy went into cardiac arrest and studied how his recovery progressed. Within two months, his spasticity decreased significantly. He was able to see, sit, smile, and speak simple words. Four months after they administered the blood, he was eating independently, walking with assistance and forming sentences of up to four words. 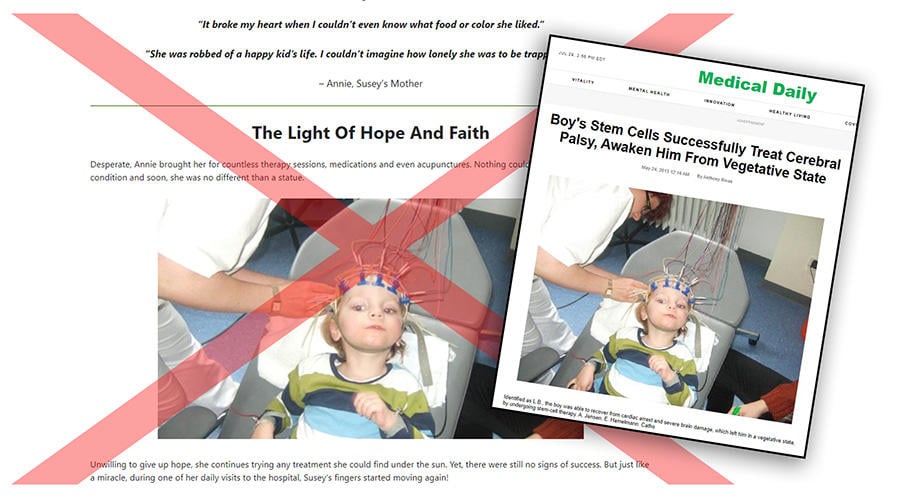 (Image source: Lead Stories composite image with Twinklepatty.com and Medicaldaily.com screenshots taken on Fri Jul 29 20:17:50 2022 UTC)
The twinklepatty.com article claims that the "magic" found by "Dr. Ira" in the extracted essence of these leaves from Susey was tested in a clinical trial:

To test the effectiveness of Otomi™, a clinical trial was conducted with over 2,000 willing volunteers. The first volunteer to try was none other than Susey.

'It was surprisingly better than the scented bag my mom gave. Ever since I used it in my routine, I started absorbing even more information than ever.
'Soon, I managed to finish my multiple degrees, only 2 years after enrolling.
'I couldn't thank Dr. Ira enough for the opportunities she gave me. To give back to the community, I became a neurosurgeon and with the help of Otomi™, I was able to cure thousands in the first year.'

The article does not mention the name of this trial or any additional details about it. Lead Stories found no trials associated with the brand name Otomi. A more general search for tea tree oil found more results, but nothing that matched the claims in this promotion. The National Center for Complementary and Integrative Health has a health information overview of tea tree oil. The "What have we learned" summarizes:

A collection of study reviews can be found (here) at the National Center for Biotechnology Information.

A January 17, 2018, article from the ASPCA Animal Poison Control Center reviews considerations for people with pets regarding concentrated essential oils and the use of diffusers in the home -- saying to avoid using a diffuser in a home with birds because of the sensitivity of their respiratory tract.

Some oils may in fact be more harmful than others. However, there are several factors that affect this such as concentration level, and what the product is mixed with. For example, concentrated forms of tea tree oil (melaleuca oil) may cause issues for your pets with only seven or eight drops, whereas another oil may take more or less. Due to the variability in concentration, formulation and possible quality of essential oils, it is best to completely avoid directly applying them to your pet. You should also keep any oils up and out of paws' reach to prevent potential ingestion.