Did Donald Trump Jr. tell Trump supporters via Twitter to not come to Mar-a-Lago because "many important people are coming through the club and we need to keep it clean"? No, that's not true: Trump Jr. did not tweet this; it's not on his verified Twitter account. The tweet was fabricated.

While my Father loves almost all his supporters, please do not come to Mar-a-Lago to support President Trump.

The tweet said the Trumps have "many important people" coming through the club located in Mar-a-Lago, Florida, and they want to keep it clean.

The fake tweet by Trump Jr. was supposedly sent on August 13, 2022, at "6:99 AM." The image shows the same username, same profile picture and a verified check mark, but searching for this tweet in Trump Jr.'s account yielded no results. The bottom right-hand corner of the tweet has the watermark "Parody by Back Rub," a clear sign of fakery.

The tweet also cannot be found on PolitiTweet, a website that archives public figures' tweets, both current and deleted.

When looking for the originator of this tweet, Lead Stories searched for "Parody by Back Rub" in Google, which led us to the Twitter account, FaithRubPol. This account tweeted the fake Donald Trump Jr. tweet on August 14, 2022. This account regularly tweets fake screenshots with a similar watermark in the lower right-hand corner each time. 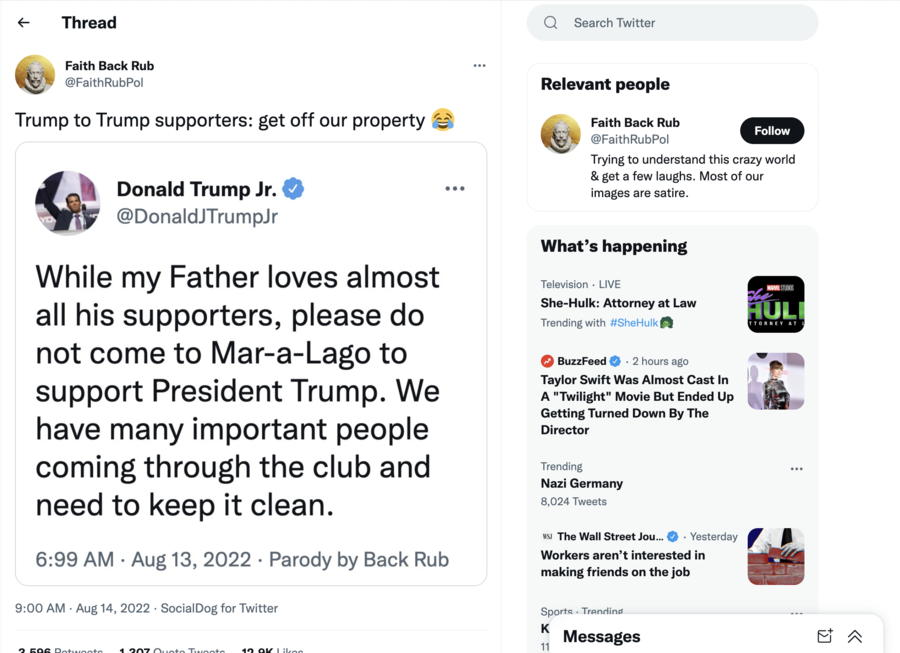 We have reached out to contact Donald Trump Jr. and will update this fact check if we receive a relevant response.