Did Vladimir Solovyov, dubbed "the most energetic" Russian state TV propagandist by the U.S. State Department, say he got drafted? No, that's not true: Deliberately mistranslated subtitles in a viral video that allegedly shows this scene distorted Solovyov's words beyond recognition. However, he did criticize the so-called "partial" mobilization previously ordered by Russian President Vladimir Putin, drawing international attention for such an out-of-character move.

The claim originated in a tweet (archived here) on September 27, 2022. It contained a two-minute-long fragment of a Russian state TV show featuring Solovyov and another chief Russian propagandist, Margarita Simonyan, the editor-in-chief of the state-owned RT Media Group. The English-language caption said:

Solovyov gets drafted and goes crazy.

Here is how the tweet appeared at the time of writing: 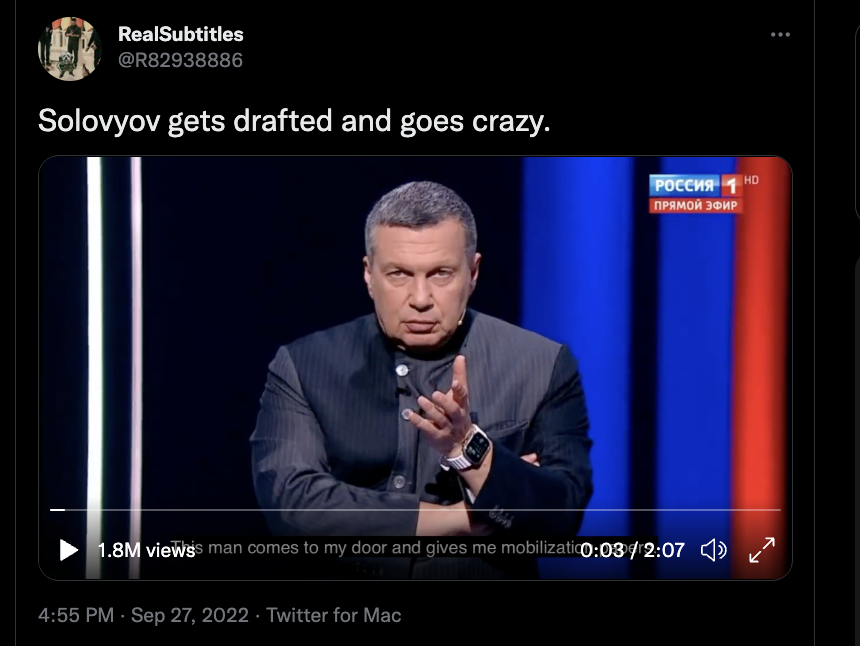 Solovyov was speaking in Russian. A bilingual person could spot the mismatch between the original sound and subtitles. Here is what he actually said:

SOLOVYOV: They [people who are mobilized] get a loan holiday ...

SOLOVYOV: They get to keep their jobs [while in the army], which is a problem for volunteers ... They [those who can be drafted] get paid the same as the people serving under contract [with the army.]

Neither Solovyov nor Simonyan were protesting the war. Instead, they advocated against a broad mobilization, returning to the previous talking points of Russian officials who claimed the government would draft predominantly those with combat experience.