Do Alzheimer's and dementia patients "ALWAYS have high levels of aluminum in their bodies"? No, that's not true: A neurologist told Lead Stories this claim was false; a spokesperson for the National Institute of Environmental Health Sciences said there is not enough evidence to suggest that "increased aluminum is always associated with dementia and Alzheimer's Disease." 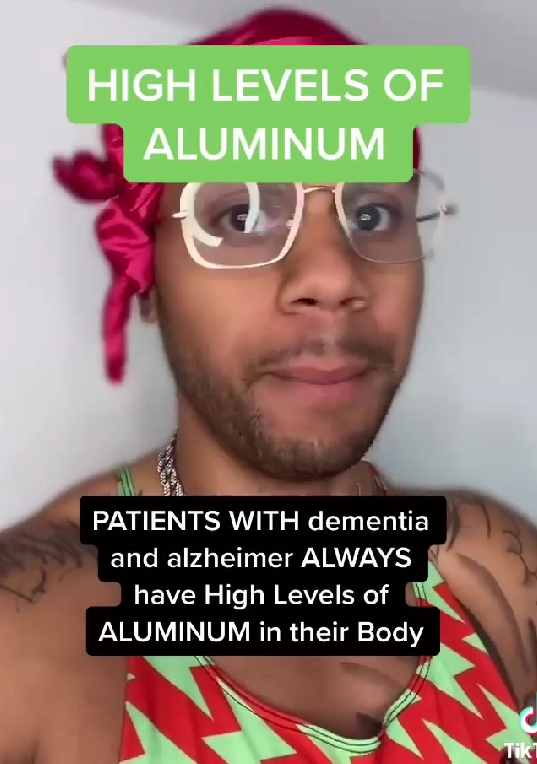 The person in the video also made claims about soy and tofu, but this fact check will focus only on the claim that patients with dementia and Alzheimer's disease always have high levels of aluminum in their bodies.

Lead Stories reached out to Dr. Lesley Fellows, a neurologist specializing in disorders of cognition who is a professor at McGill University. She told us in a September 20, 2022, email that this claim is false:

It is not the case that there is always an elevated level of aluminum in dementia ... Whether there is any consistent relationship between Alzheimer's disease and brain aluminum content is uncertain, with the larger, better conducted studies suggesting that there is no relationship, once other confounding variables are taken into account. There are various hypotheses about how aluminum might be involved in brain toxicity and neurodegeneration that are still under scientific study, although people have been poking around at this for a long time now (the initial claims that aluminum might be important in Alzheimer's Disease go back to the 1960's). This is not a prominent idea in the field, at this point.

Fellows also cited a 1996 study titled, "Content of brain aluminum is not elevated in Alzheimer disease."

Maria C. Carrillo, chief science officer at the Alzheimer's Association, similarily wrote in a September 21, 2022, email that the claim is false:

The most important thing for people to know is that brain levels of aluminum are not related to risk for dementia.

Carrillo also cited a page titled, "Myths" on the Alzheimer's Association website that debunked the claim that "drinking out of aluminum cans or cooking in aluminum pots and pans can lead to Alzheimer's disease."

Robin Mackar, of the National Institute of Environmental Health Sciences, wrote in a September 20, 2022, email that the claim can't be confirmed:

There is not enough current evidence to say with any certainty that increased aluminum is always associated with dementia and Alzheimer's Disease.

Aluminium is seen in the normal, healthy brain. It is not clear how aluminium is getting into the brain from the blood. The levels currently seen in peoples brains hasn't been shown to be toxic but an ageing brain may be less able to process the aluminium. Although aluminium has been seen in amyloid plaques there is no solid evidence that aluminium is increased in the brains of people with Alzheimer's disease. No convincing relationship between amount of exposure or aluminium in the body and the development of Alzheimer's disease has been established.

Aluminium in food and drink is in a form that is not easily absorbed in to the body. Hence the amount taken up is less than 1% of the amount present in food and drink. Most of the aluminium taken into the body is cleaned out by the kidneys. Studies of people who were treated with contaminated dialysis have shown an increase in the amount of aluminium in the brain. This was believed to be as a result of inadequately monitored dialysis which then led to encephalopathy related dementia. Methods of dialysis have since been improved and doctors are better able to predict and prevent this form of dementia.

One large recent study did find a potential role for high dose aluminium in drinking water in progressing Alzheimer's disease for people who already have the disease.

However, multiple other small and large scale studies have failed to find a convincing causal association between aluminium exposure in humans and Alzheimer's disease.