Did Canadian Prime Minister Justin Trudeau sing in a London hotel lobby bar before Queen Elizabeth II's state funeral? Yes, that's true: Trudeau, accompanied by Canadian musician Gregory Charles on the piano, was belting out "Bohemian Rhapsody" by the band Queen two nights before the British monarch was laid to rest on September 19, 2022.

The account that posted the tweet referenced "last night at the Savoy." While Trudeau was singing on the evening of September 17, 2022, he was not at The Savoy Hotel in London, but at Corinthia, another luxury hotel in the British capital.

Images of Corinthia on TripAdvisor show the same piano, floor and chair as appeared in the video: 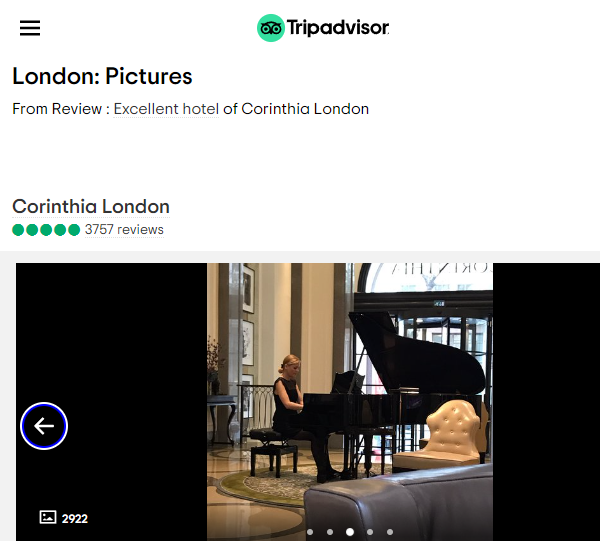 As Trudeau is singing, a bus seen passing by outside the hotel displays an advertisement from the Global Entertainment Group. This tweet shows the ad campaign on the bus from August 2022:

Have you spotted one of our @CapitalOfficial buses this summer? ☀️🚌

On September 19, 2022, Trudeau's office confirmed in a statement that he was singing in the hotel at the piano with other members of the Canadian delegation, including musician Gregory Charles, who had traveled to London for the queen's funeral:

After dinner on Saturday, Prime Minister joined a small gathering with members of the Canadian delegation, who have come together to pay tribute to the life and service of Her Majesty. Gregory Charles, a renowned musician from Quebec and Order of Canada recipient, played piano in the hotel lobby which resulted in some members of the delegation including the prime minister joining.Over the past 10 days, the Prime Minister has taken part in various activities to pay his respects for the Queen, and today, the entire delegation is taking part in the State Funeral.

In a September 18, 2022 interview with The Globe and Mail, Charles spoke about playing the piano while Trudeau sang:

Around the official events, the Canadian delegation has also found moments of joy and celebration, said Mr. Charles, 54, an Officer of the Order of Canada. Late Saturday night, he sat behind a piano in their hotel lobby and entertained people in the delegation, including the Prime Minister, and hotel guests. He said the proceedings remind him of Caribbean funerals, blending sombre moments of respect with ones celebrating life and sharing stories.

"Everyone sang with me for two hours," he said, "That was the feeling, that was a lot of fun."

Additional Lead Stories fact checks of claims related to the death of Queen Elizabeth II can be found here.