Does a "newly leaked report" from the RAND Corporation, a U.S. think tank, reveal the "true motives behind European Destabilization & The Russia/Ukraine War"? No, that's not true: In an email to Lead Stories and a news release on its website, the RAND Corp. called the "supposedly leaked" report "fake."

The claim appeared in the September 12, 2022, issue of the Red Pill News newsletter (archived here), published on Substack. The newsletter was entitled "Newly Leaked Report From Rand Corporation Reveals The True Motives Behind European Destabilization & The Russia/Ukraine War." It opened:

This is what the newsletter looked like on Substack at the time of writing:

A similar claim appeared in an article (archived here) published on September 15, 2022, in the Swedish newspaper Nya Dagbladet under the title "Shocking document: How the US planned the war and energy crisis in Europe." It opened:

In what appears to be an exceptional internal leak from the think tank RAND Corporation, known among other things to have been behind the American strategy for foreign and defence policies during the Cold War, a detailed account is given of how the energy crisis in Europe has been planned by the United States.

This is what the article looked like on Nya Dagbladet at the time of writing: 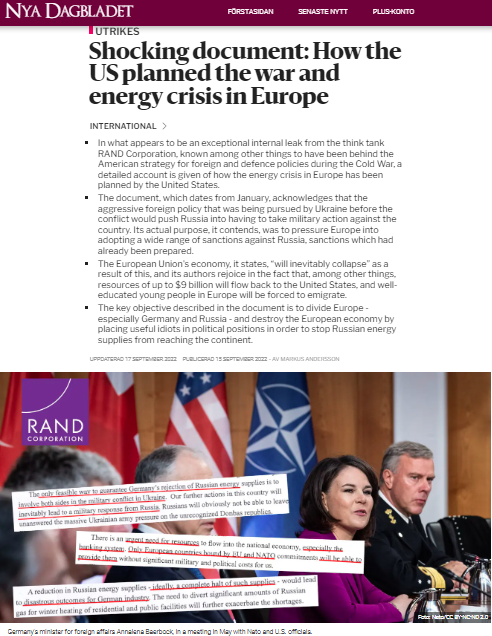 Both claims cite what is said to be a leaked RAND Research Report (archived here) dated January 25, 2022, with the title "Weakening Germany, strengthening the U.S." The first page suggests the document was distributed to the White House Chief of Staff (WHCS), Assistant to the President for National Security Affairs (ANSA), Department of State, CIA, National Security Agency (NSA) and the Democratic National Committee (DNC): 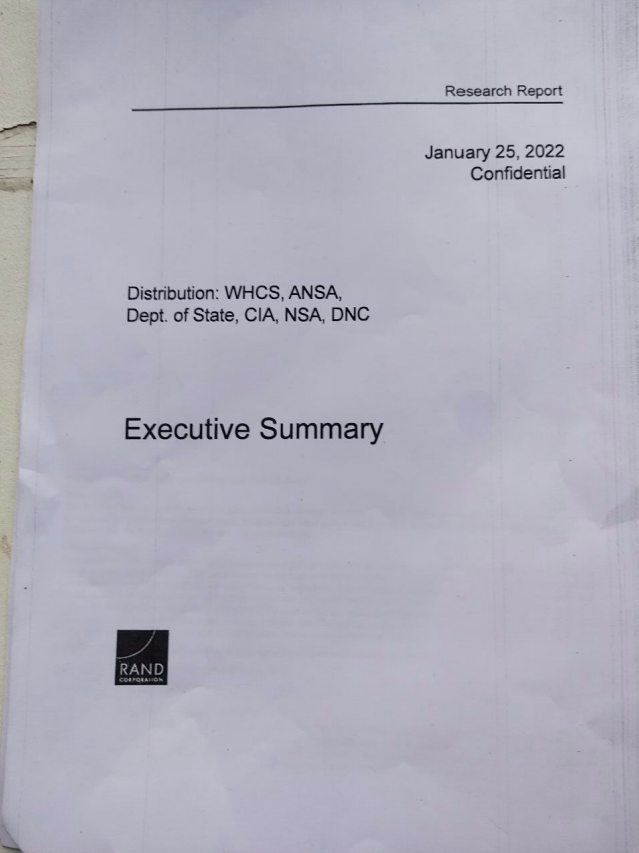 In a September 14, 2022, news release on its website, the RAND Corp. said the document is not from the global think tank:

A supposedly leaked RAND report about a bizarre U.S. conspiracy to 'weaken Germany' is fake.

Genuine RAND research, analysis, and commentary on the war in Ukraine may be found at this page.

Given the potential origins of this fake document, we encourage you to explore this resource on the "firehose of falsehood" approach to propaganda and RAND's extensive research on "Truth Decay," a phenomenon driven in part by the spread of disinformation.

I can confirm the supposedly leaked report is a fake.

The newsletter's claims play into a greater QAnon conspiracy theory about a global cabal of satanic elites and the deep state. It uses this example from the fake RAND Corp. document:

'The impeachment of the President cannot be ruled out under these circumstances, which must be avoided at all costs.'

This passage alone demonstrates the partisan work being done by RAND and the coordinated tactics in use between the Democrat party and the National Security State, THE DEEP STATE. But what's most shocking is the lengths they suggest going to in order to maintain control of the nation by both groups in order to protect Joe Biden and whoever is pulling his strings from behind the scenes.

The alleged distribution of the fake report to the DNC is supposed to be an example of the think tank's partisan leanings.

QAnon is an unfounded conspiracy theory that presents as truth, among other things, that former U.S. President Donald Trump is waging a secret war against satanic Hollywood elites, Democratic elected officials and business leaders who are running a secret international child sex trafficking ring. QAnon followers receive messages online from an account called "Q" that they believe informs them of the coded messages Trump is sending to signify his accomplishments in the secret war. QAnon supporters believe Trump will oversee arrests of high-powered people for child sex abuse and that he will be returned to a place of power as the president again. QAnon supporters refer to something called "The Storm," which will be the moment when Trump will expose and punish the international cabal of evildoers.

Lead Stories has debunked multiple claims made by QAnon supporters, including these claims here and here.