Did a Republican poll watcher in Arizona have access to voter check-in information where she claims to have seen evidence that 200 extra ballots were counted? No, that's not true: The Maricopa County Elections Department told Lead Stories that "[p]olitical [p]arty observers do not have access to voter check-in data," plus "there are processes in place every election to reconcile the total ballots against Election Day check-ins. This ensures all legal ballots are only counted once."

The claims appeared in a Gettr post (archived here) published to the social media platform and microblogging site on November 10, 2022. It opened:

Election Day Vote Center where I was Poll Watching in Maricopa:

♦️ Suspicious ♦️Where did the extra 200 Ballots come from???

(Reported to the AZ GOP)

Drop Boxes also had dozens of Ballots already in them as they were placed, still sealed!!! Sherriffs were called out to witness. 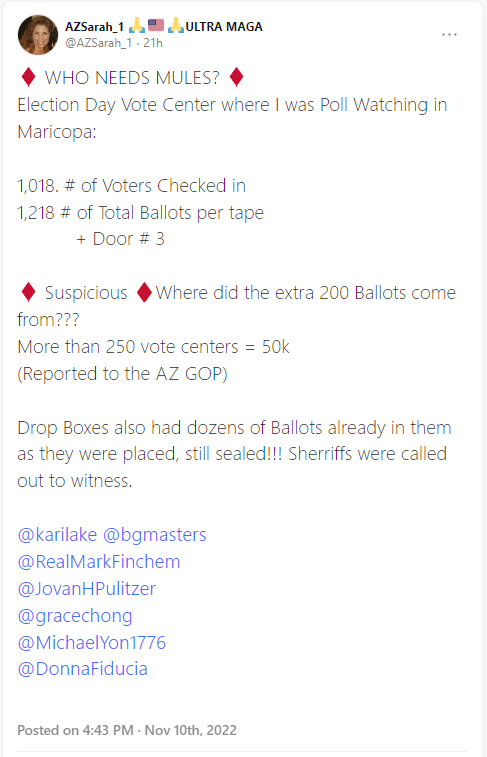 The post is by Sarah O'Neill, who also appeared on "Steve Bannon's War Room," a conservative television show on Lindell TV. Her social media entry opens with a reference to "2000 Mules," a film that promotes the theory that 2,000 people in five key swing states collected and delivered hundreds of thousands of absentee ballots on behalf of a "cartel" to throw the 2020 presidential election in favor of Joe Biden.

O'Neill claims that as a poll watcher she saw evidence of 200 extra ballots being cast on Election Day, November 9, 2022, by comparing the number of voters who checked in with the number who cast ballots. In a November 14, 2022, email, Maricopa County Elections Department Communications Director Megan Gilbertson said that's not possible:

Political Party observers do not have access to voter check-in data. Additionally, there are processes in place every election to reconcile the total ballots against Election Day check-ins. This ensures all legal ballots are only counted once.

O'Neill also said her claim was reported to the Arizona GOP. Lead Stories reached out to the Republican Party of Arizona to get their confirmation but did not receive a response. If one is provided, it will be added to the story.

The social media post continued: "Drop Boxes also had dozens of Ballots already in them as they were placed, still sealed!!! Sherriffs were called out to witness." O'Neill appears to be suggesting that drop boxes were delivered with ballots already inside them. In her email to Lead Stories, Gilbertson said:

Sgt. Calbert Gillett with the Maricopa County Sheriff's Office of Public Information said in a November 11, 2022, email that members of the law enforcement agency didn't see what O'Neill was describing because they weren't there:

No, we were not called to any drop box location to 'witness' any activity undertaken by elections representatives.

In a separate social media post, O'Neill identified where she said she was stationed as a poll watcher, saying she was an observer at the Salt Creek Indian Reservation: 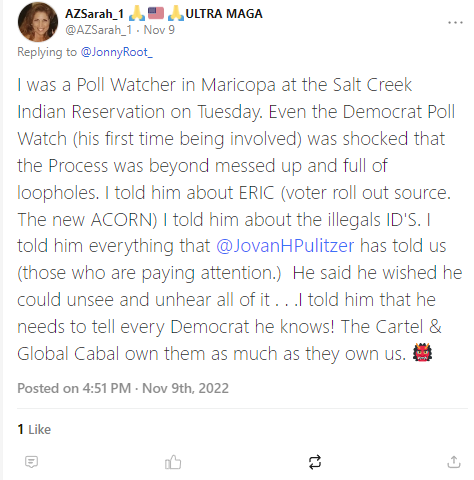 But, in her email, Gilbertson said, there's no such Native American nation and no such place:

Lastly, we do not have a tribe named Salt Creek in Arizona.

There is a similar-named Salt River Pima-Maricopa Indian Community in the greater Phoenix area. Phoenix is located in Maricopa County.