Do large downticks in cumulative voting graphs for the 2022 Pennsylvania Senate and governor's races prove election fraud? No, that's not true: Edison Research, which supplies election data to news organization websites, told Lead Stories that the downticks shown by My Pillow CEO Mike Lindell on social media and on his Frank Speech website -- totaling tens of thousands of votes -- represent corrections following a clerical error by an elections board in a single Pennsylvania county. In an email to Lead Stories, a representative of the Pennsylvania Department of State described it as a "technical issue with a file of one of the counties."

The claims appeared in a video posted to Rumble (archived here) on November 9, 2022, titled "Select Election Crime in Real Time." The caption says: 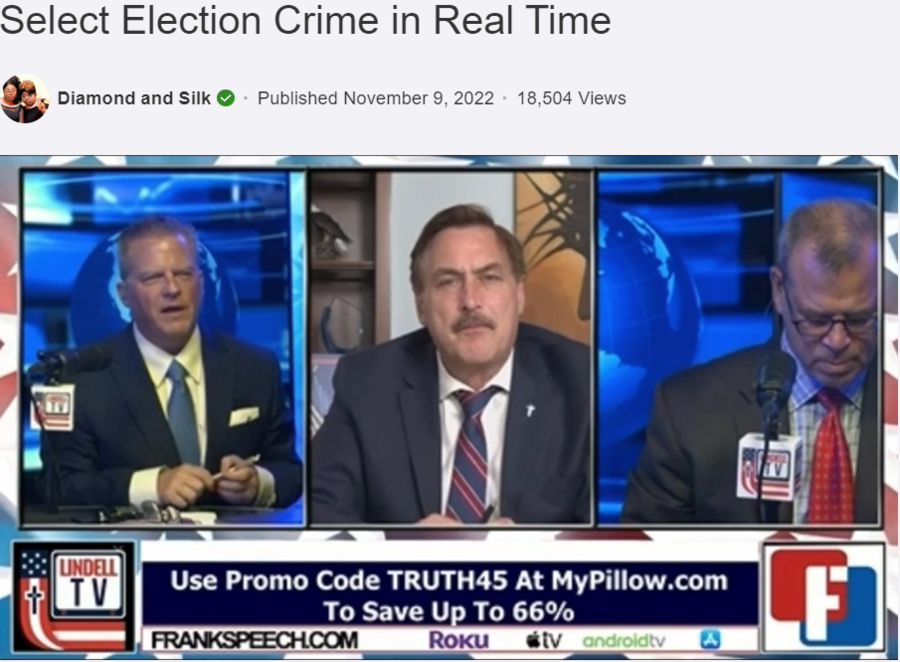 The video posted to Rumble features about 10 minutes of Election Night coverage on Lindell TV. About three minutes into the video, Lindell and Jeffrey O'Donnell, who describes himself as a data analyst, point out a sudden drop in votes in the Pennsylvania Senate race between Republican Mehmet Oz (red line) and Democrat John Fetterman (blue line). It's highlighted in the graph below, which was taken from the Lindell video: 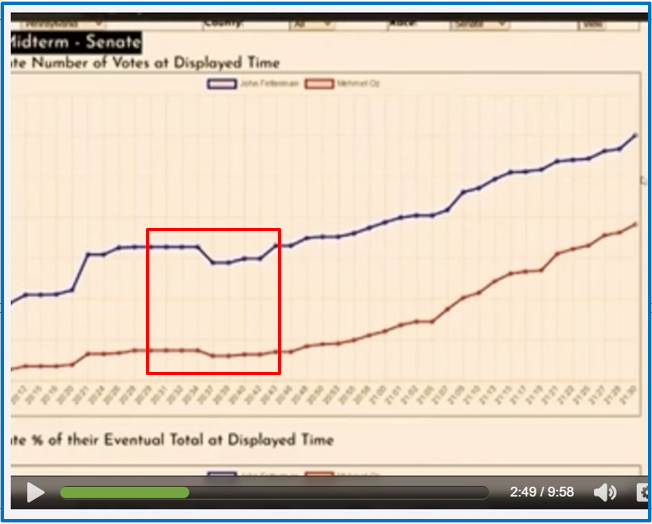 In describing the graph, Lindell says at 3:15 that the cumulative vote count should never go backward:

Now I want everybody to look at this. ... You can't go in reverse, everybody. These are the order these votes are coming in through the Edison Report which is one of the biggest monopolies in this country. ...

I think that they lowered that number ... because the cheat was too big there. They're making the steal. The algorithm is too big and they got to correct it so it doesn't look like a big anomaly or a huge deviation where the whole country knows they stole the election from him.

In a November 14, 2022, email, Pennsylvania Department of State Communications Director Amy Gulli explained the sudden downtick in the cumulative vote count for the statewide race:

[T]here was a technical issue with a file one of the counties [Washington] uploaded to our election night returns site around 8:00 on election night. Our staff identified the error shortly after 8 p.m. and worked with the county to fix the issue. The incorrect numbers were displayed for only a few minutes.

John Sebes, the chief technology officer of the Open Source Election Technology Institute, says that there is an air gap between the official vote-counting system and the election night returns sites operated by states. In a July 11, 2022, interview with Lead Stories via Zoom, Sebes explained the air gap:

... in a back office in each county is the EMS (Election Management System) computer ... In some other part of a county facility, somebody is actually transcribing numbers ... re-keying (numbers into a separate and public-facing computer system or website that is not connected to the EMS).

Sebes said when the EMS generates a counting update two things can happen. In some places, a hard copy is handed to workers for Edison or the AP or other news agencies. In some counties, the numbers are then added to a county or state website, accessible to all and that can be source for the election data services. In either case, election data services add the new numbers to yet another system, their own, which generates raw numbers, graphics material or whatever product they offer. The product of that system for distributing copies of the EMS update is at two removes from the actual election tally. When Lindell's ally scrapes it, he then runs it through a third system to create graphs on Lindell's streaming broadcast.

That was a typo by the Washington County board of elections. It was sent through the vote feed and posted online. The County sent a vote of 96,890 for Fetterman and 30,000 for Oz. Edison quality control mechanisms caught that the vote had to be a mistake and deleted the vote at 8:36. The county itself appears to have corrected their mistake at 8:39. The next vote they sent through the feed was 9689 for Fetterman and 3000 for Oz. So Washington county had mistakenly added an extra zero to both candidates votes in the initial report.

Farbman included this screenshot of the initial reporting mistake before it was corrected:

The Washington County Board of Elections website shows the final local tally for the Oz-Fetterman race with 93,593 total votes cast. It's a far smaller count than the early tally with the typo, which showed nearly 127,000 votes. Also, note that Oz ended up winning the county despite trailing early on:

At the 6:40 mark, Lindell pointed out a similar downtick in the Pennsylvania governor's race between Democrat Josh Shapiro (blue line) and Republican Douglas Mastriano (red line)

Ninety thousand votes. You guys, if you're tuning in. That's a Democrat. They took 90,000 votes off of a Democrat. 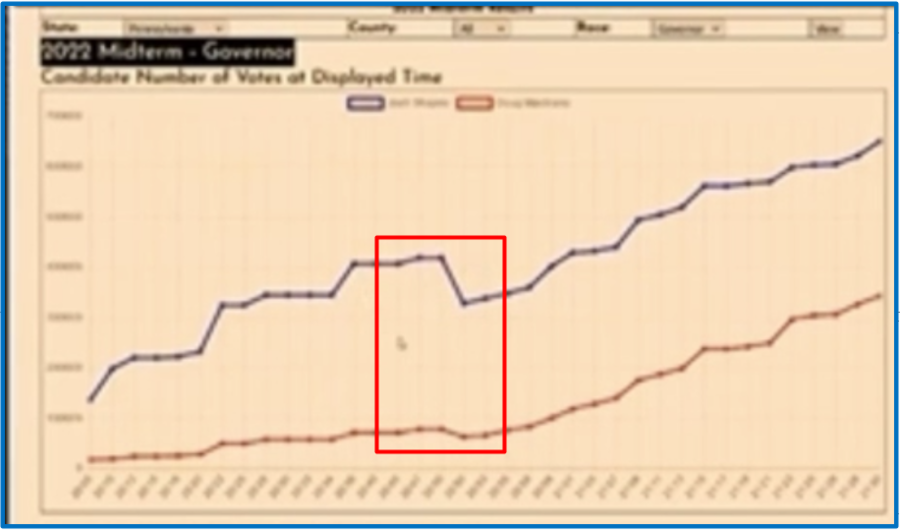 Gulli covered both races with her earlier explanation of a "technical issue" in the vote submission by Washington County. Farbman with Edison told Lead Stories:

Yes same mistake - added a 0 to each vote.

"Scraping" is a process by which website data is automatically copied and translated into human-readable form. Several Election Night statements on Lindell TV by the My Pillow founder and by O'Donnell gave "Edison Data" as the source for the numbers in the graph. Edison provided the election data to CNN, Farbman told Lead Stories in a November 9, 2022, email. That data was then scraped by O'Donnell for use on Lindell TV.

Scraped data is not official data. It's a record of what a private data company has collected and transmitted to clients and would be the equivalent of hearsay evidence if one were accusing election officials of vote fraud, as Lindell has done.

Scraping is not clearly illegal or even opposed by website operators. Election outcome deniers scrape instead of paying for a data feed of their own from Edison or The Associated Press. But, even if they paid, private company data feeds do not provide an official record of the pace or order of official ballot counts.

Lindell and O'Donnell and other commenters on social media have said sharp upticks in vote tallies on the graphs of scraped data are "unnatural" as if the flow of data from big and small counties should remain at a steady rate. They cite sharp changes as evidence that electronic voting equipment has been hacked.

They are not evidence of anything but the addition of big precincts, counties or ballot types to the overall tally. A conservative Wisconsin group's audit of the 2020 election tally showed there was no basis for claims of improper "ballot dumps" that were, similarly, based on spikes in the timeline of vote counting.

Similarly, the Michigan Senate's Republican-controlled Oversight Committee investigated 2020 allegations that big spikes in the incremental tally proved fraud, and found no evidence to support that theory, scolding those who used tally graphs to make unfounded claims:

Large spikes in the vote count are not necessarily unexplainable or unusual. They do not alone constitute evidence of fraud and can be reasonably expected.

The 2022 claims based on data spikes recycle false claims made in 2020 that there was a clandestine "dump" of fake ballots in Wisconsin and Michigan that caused a sharp spike in the line graph of votes tallied over time. In that example, independent election observers and professional election administrators in Michigan and Wisconsin pointed out that in every election, large changes in vote totals correspond to the counting of big batches of votes from cities and of absentee ballots, which are added into the totals all at once.

Edison is a private company that conducts market research and political polling. Edison offers delegate estimates, Election Day exit polling and election projections to The New York Times, ABC, CBS, CNN and NBC, among other news outlets. Edison is also one of several suppliers of vote tallies to news outlets nationwide on Election Day and through the counting period. As a private company, Edison tallies are not the official data. What they send out is customized in some cases to feed directly to customers' individual graphic packages, where absolute numbers are rounded off and turned into pie charts, for instance.