Are COVID-19 PCR tests "linked to human cloning"? No, that's not true. There is no evidence confirming that human cloning ever occurred. A study cited in a video making the claim never discussed PCR tests used during the pandemic because the study was published years before the world learned about COVID-19.

The story originated from an episode of the Stew Peters Show (archived here) that was uploaded online in August 2022 and resurfaced on social media in late November 2022. Its title said: 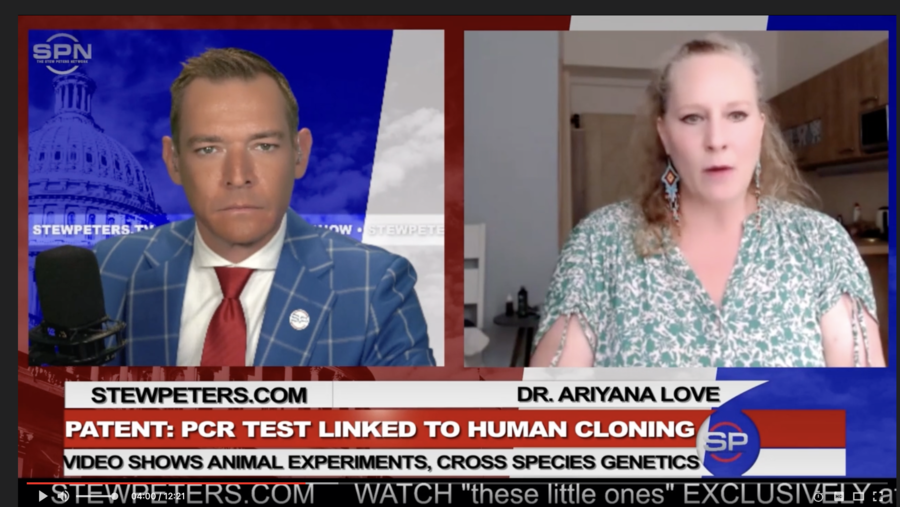 The segment showed host Stew Peters, whose podcast was deleted from Spotify for spreading COVID-19 misinformation, talking to a woman who was introduced as "Dr. Ariyana Love." The video opens with Peters saying:

PETERS: Dr. Ariyana Love is back with us again with a horrific discovery. She says that she has a patent, patent proof that COVID PCR tests are actually not tests at all, but that they're linked with human cloning technology. They're not science fiction, are they?

LOVE: It's real. The PCR kits have never been about testing for COVID as people were told, it is about cloning. They are cloning devices.

However, the study Love cited to support her words was published five years before the pandemic and did not discuss COVID-19 at all.

By claiming that the 2015 paper titled "Molecular cloning using polymerase chain reaction, an educational guide for cellular engineering" from the peer-reviewed Journal of Biological Engineering talks about the artificial replication of humans, she misrepresented its content.

Cloning is an umbrella term for several processes that involve the replication of biological material, and only one of them -- reproductive cloning -- involves the duplication of an entire organism. According to the National Human Genome Research Institute (NHGRI), part of the National Institutes of Health:

...researchers remove a mature somatic cell, such as a skin cell, from an animal that they wish to copy. They then transfer the DNA of the donor animal's somatic cell into an egg cell, or oocyte, that has had its own DNA-containing nucleus removed.

In both processes, the egg is allowed to develop into an early-stage embryo in the test-tube and then is implanted into the womb of an adult female animal.

But reproductive cloning of humans, already prohibited in several countries, has not taken place, according to the website of the NHGRI:

Despite several highly publicized claims, human cloning still appears to be fiction. There currently is no solid scientific evidence that anyone has cloned human embryos.

What the 2015 study discussed was limited to a polymerase chain reaction (PCR) and gene cloning, which are completely different processes.

The National Human Genome Research Institute says that the primary purpose of gene cloning is "to make copies of genes" scientists "wish to study":

The procedure consists of inserting a gene from one organism, often referred to as "foreign DNA," into the genetic material of a carrier called a vector. Examples of vectors include bacteria, yeast cells, viruses or plasmids, which are small DNA circles carried by bacteria. After the gene is inserted, the vector is placed in laboratory conditions that prompt it to multiply, resulting in the gene being copied many times over.

One of the 2015 article authors, Sayed Shahabuddin Hoseini, gave an example of one practical application of this method when interviewed by Reuters:

Imagine you could 'copy' the insulin gene from human cells and 'paste' it into a bacterial cell and (grow these) bacteria very easily in the laboratory, then the bacteria will read the human insulin gene and produce insulin ... lots of insulin for diabetic patients.

During the pandemic, the PCR method has been used in tests whose purpose, according to the CDC, is to establish whether a person was infected with COVID-19. This method of replicating segments of DNA ensures that scientists or lab technicians have enough of the sample to run the tests. The procedure does not involve reinjection of the tested specimen back in the system -- instead, a person would only receive the results in an electronic or paper form.

The Stew Peters Show's guest, Ariyana Love is a naturopathic doctor According to WebMD, naturopathic medicine embraces therapies that include herbs, massage, acupuncture, exercise and nutritional counseling. The number of her medical license -- typically easily accessible to the public -- couldn't be found online by Lead Stories.

Love is not known for publishing scientific articles about COVID-19 in peer-reviewed journals: Google Scholar does not show a single paper under this name since 2020.

Lead Stories previously debunked other claims made by Ariyana Love here and here.

Other Lead Stories fact checks about COVID-19 can be found here.