Did "Jacinta Ardern", the prime minister of New Zealand, threaten to put mRNA vaccines in the water supply if enough people did not take the shot? No, that's not true: This claim originated in late January 2022 with an image of a made-up news article that was never published. Although that false image has been debunked, the rumor that Ardern considered putting a COVID-19 vaccine in the water supply persists.


Australia intends to vax all cattle by the end of the year with MRNA. It will be in milk & cheese.
Bill Gates wants to get it into plants as well & Jacinta Ardern threatened to put it in the water supply if enough people did not take the shot.
Awake yet? 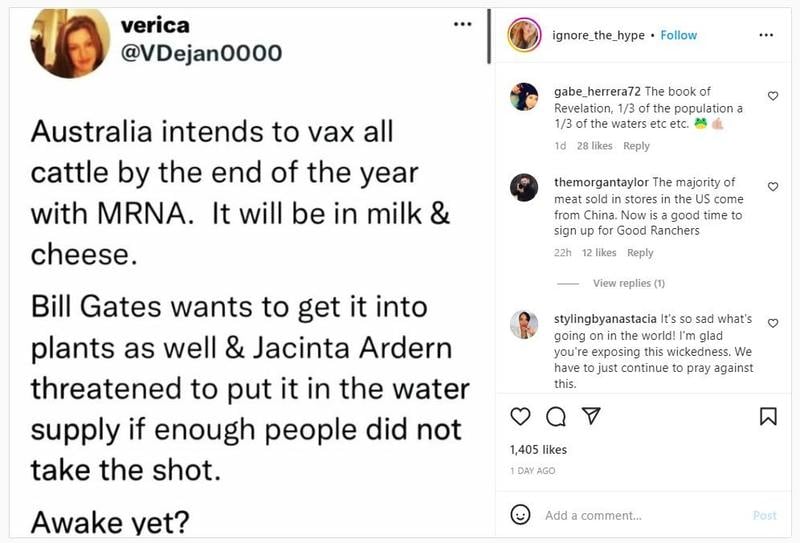 Lead Stories has already addressed the specific claim regarding the development of mRNA vaccines for cattle in an earlier fact check. These vaccines to protect livestock against foot-and-mouth disease and lumpy skin disease are in development, and may not be available until at least August 2023. This article will focus only on the claim that Ardern threatened to put an mRNA vaccine in the water supply if enough people did not take the shot.

That claim dates back to at least January 27, 2022, when a screenshot of a Facebook post was published on Twitter (archived here, and pictured below). The screenshot appeared to show a post in the private Facebook group "Freedom Truth Survival NZ." It showed what looked to be an article shared from nzherald.co.nz -- but the faked image showed a fabricated news article. The New Zealand Herald never published an article titled, "Leaked emails expose Governments 'underhanded' vaccine plan." The lead-in to the fabricated article says: 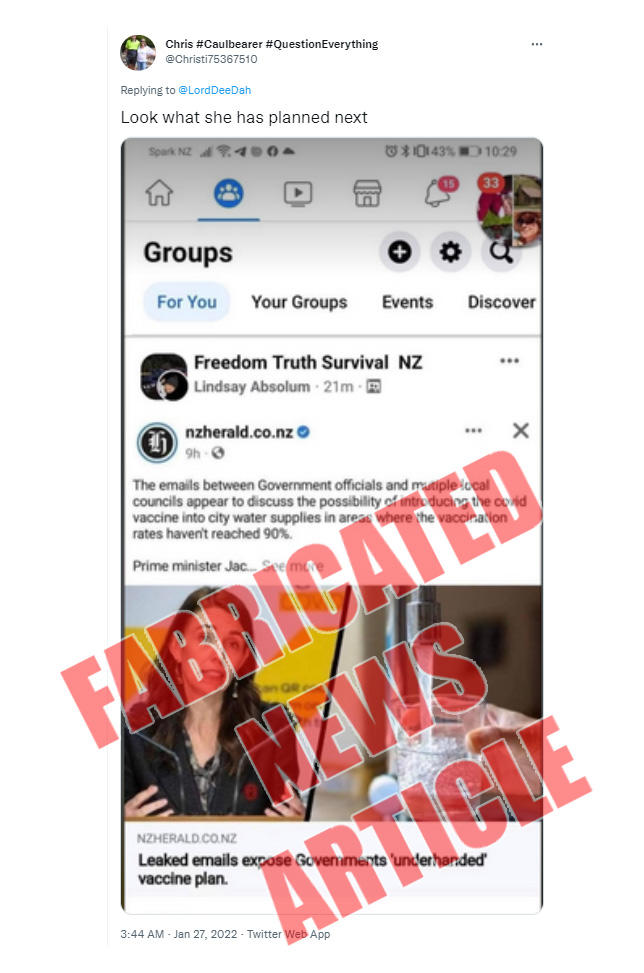 Not only did the New Zealand Herald never publish this story and government officials never discussed this, the claim is not possible. Current mRNA technology requires injectable vaccinations to be stored in ultracold conditions, and while scientists are investigating the potential for developing oral mRNA vaccines, they don't currently exist. Several fact checking organizations debunked this fabricated report at the time, such as AFP Fact Check, Reuters and the Australian Associated Press.

On September 12, 2022, the New Zealand Herald published an article titled, "Covid-19 traffic light system scrapped: All you need to know." In a press conference the day before, Ardern announced that the "traffic light system," a color-coded system that measured certain markers and determined the community response, would be ended, and that all government vaccine mandates would end. The video of the press conference is embedded below, cued to 1:29 minutes in when Ardern begins to speak about the pandemic. The transcript of relevant highlights is provided below with timestamps:

(1:29) Today Cabinet has determined that based on public health advice we are able to remove the traffic light system and with that decision, claim back the certainty we have all lost over the last three years ...
(6:01) All remaining vaccine mandates also used by government will also now end. The only current mandates were for health and disability workers but with high vaccination rates now coupled with high numbers of people having had the virus itself it's now safe for them to conclude. With the removal of the vaccination mandate it will be at an employer's discretion as to whether to require their workforces to be vaccinated. We're also ending vaccination requirements for all travelers arriving into New Zealand including air crew.