Was a baby found wandering alone behind someone's home without a parent or guardian, and did she say her mother's name is Wendy? No, that's not true: The child, who was only about 10 months old in the photos, was found at the Minneapolis-St. Paul International Airport on August 21, 2022, with a woman "in crisis" who was not her mother. This story was widely reported in the news. Although the exact circumstances remain unclear, by August 24, 2022, Minnesota Department of Public Safety investigators had located the girl's mother. The photos of that baby have now been repurposed as part of a social-media ruse to urge people to share the post.

I discovered this girl today walking behind our home in Florence . can't find her parents, my neighbours don't know her or how she came here.She says her mom's name is Wendy Let's bump this post so it may reach her family.

This is how the post appeared at the time of this fact check's writing: 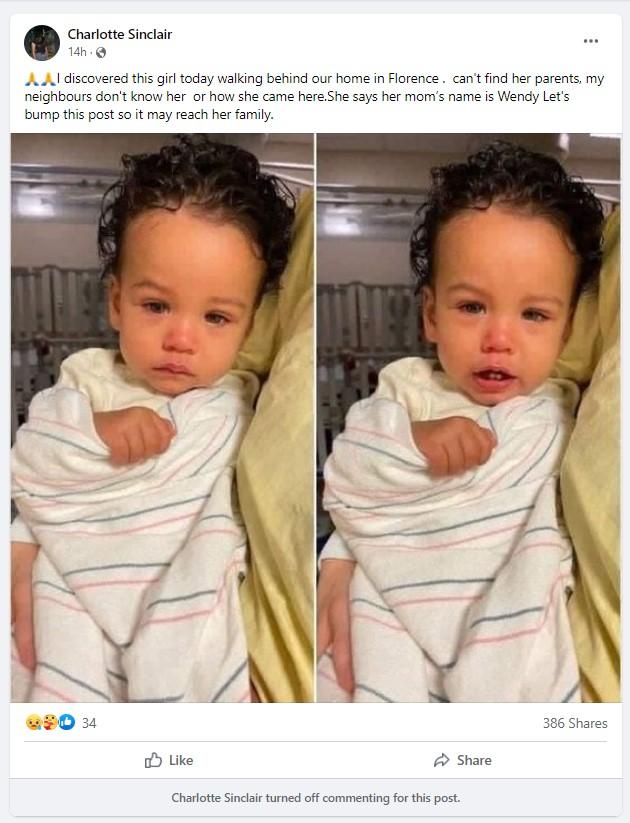 Commenting was turned off on the post, as frequently occurs with deceptive posting. This would prevent people familiar with the trick from warning others that the post is not genuine. A widely distributed post can then be edited to become spam.

One post in the California Facebook group "Porterville Buy, Sell, & Trade Home Decor & furniture" was posted at 7:14 p.m. PST on November 5, 2022. Just over an hour later, at 8:19 p.m., the original post about the lost baby was edited and a new image with an ad for Go2Bank Mobile Banking was substituted (below right).

The "view edit history" feature (below left) can be accessed through the three dots menu (⋯) in the upper right corner of every Facebook post. 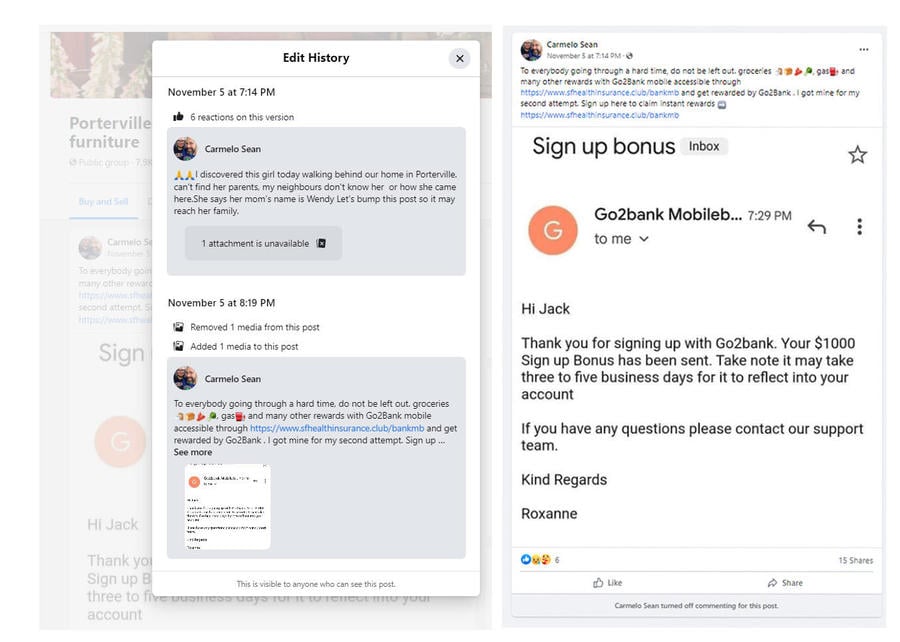 I discovered this girl today walking behind our home in Porterville. can't find her parents, my neighbours don't know her or how she came here.She says her mom's name is Wendy Let's bump this post so it may reach her family.

After:
To everybody going through a hard time, do not be left out. groceries

and many other rewards with Go2Bank mobile accessible throughhttps://www.sfhealthinsurance.club/bankmband get rewarded by Go2Bank . I got mine for my second attempt. Sign up here to claim instant rewards

Lead Stories has debunked several false claims associated with this deceptive method of spamming. The method does not rely on a specific narrative; only on the post inspiring people in a local group to pass the post along. Examples include a dangerous man on the loose; an unidentified dog that was hit by a car; an unidentified young man in a hospital and thieves who were photographed cutting catalytic converters from cars.