Does a birth certificate or a Social Security number turn a person into the property or a ward of the state? No, that's not true: The claim misrepresents the nature of a highly publicized case in New Zealand in which the judge ruled that a baby should receive a needed blood transfusion so doctors could perform heart surgery despite his parents' refusal to use the blood of vaccinated donors. The boy was not permanently removed from his family's custody, and his birth certificate was not part of the case.

The claim appeared on Instagram on December 9, 2022. A portion of the lengthy caption said:

Did you know that when you register YOUR baby with the state and are given a BIRTH CERTIFICATE/SOCIAL SECURITY NUMBER in return, your baby becomes PROPERTY/WARD of that state?
Birth certificates and Social Security Number are similar to the stamp inmates get (SID) due to being incarcerated and practically enslaved with little to no constitutional rights. These numbers are to keep track of you like product - aka SLAVERY.

Signing it means you've VOLUNTARILY given the government the consent to act as an OVERSEEING GUARDIAN OVER BOTH you and baby.
Hence why your baby can be taken as property when the government/CPS feels as if you're a 'negligent'
mother when you may simply be asserting your right to PROTECT YOUR BABY - like not wanting to give baby synthetic vitamin K at birth.
This happens when you don't know law and how to assert your rights, especially without the Rights Over My Birth package. 😔 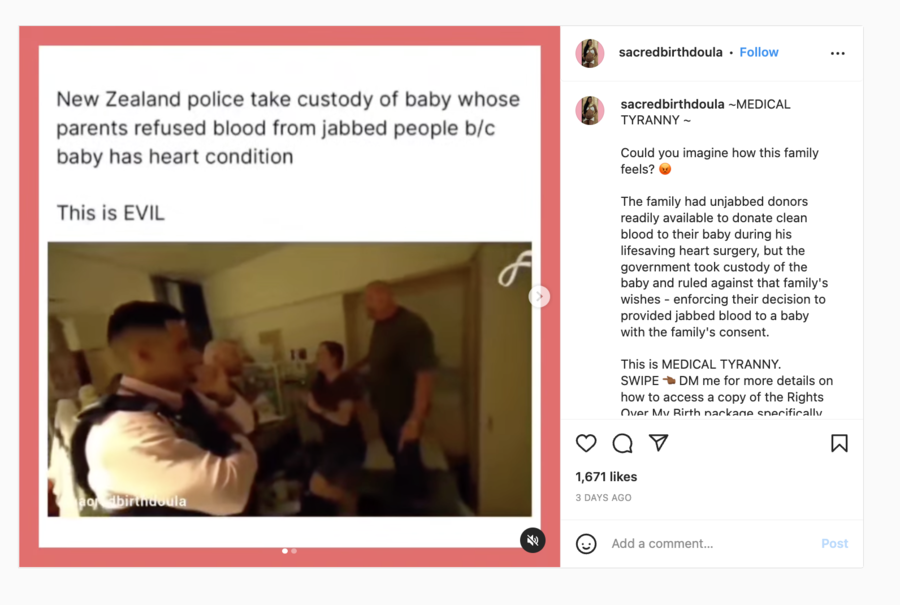 The post contained a video related to a case of a New Zealand baby that received international media coverage in late November and early December 2022 (for example, here, here, here, here and here). The 4-month-old boy, identified only as Baby W to protect his privacy, needed a blood transfusion for life-saving heart surgery, but his parents insisted that the blood of the vaccinated people not be used. As a result, Health New Zealand filed a guardianship case, citing the urgency of the medical procedure.

On December 7, 2022, BBC reported that the judge agreed with the arguments of the health authorities, additionally stressing that his decision did not affect the status of the parents as primary guardians of the baby:

Justice Ian Gault ordered that the boy - identified as Baby W in court documents - be placed under the guardianship of the court 'from the date of the order until completion of his surgery and post-operative recovery'. ...

But he emphasised that the parents remained the boy's primary guardians and said doctors must keep them informed at all times about his treatment and condition.

Court records of the Baby W case can be found here and here.

Mark Henaghan, a professor of law at the University of Auckland in New Zealand who specializes in family law, told Lead Stories via email on December 12, 2022:

Baby W is not the 'property of the state' at all. Children are never described as property in our system of law. The guardianship order the court granted gives the Court power to make decisions about the child in terms of the operation the child needed, no more no less than that. The Court only takes on the role it did if it's in the best interests of the particular child. It's for a limited purpose and a limited time.

There is no indication that a birth certificate played any role in the case.

There is also no evidence that the simple fact of recording a person's birth makes them "property" or "ward" of the state anywhere.

New Zealand requires every birth be registered but makes a birth certificate optional:

Every birth in New Zealand must be registered by law. It's free to register your baby, but there's a charge if you want to order a birth certificate.

The New Zealand government website gives a straightforward definition of this document:

New Zealand birth certificates are a record of birth.

The American Bar Association summarizes the purpose of this document in the United States:

A birth certificate is a document issued by a government that records the birth of a child for vital statistics, tax, military, and census purposes. The birth certificate is among the first legal documents an individual might acquire. They are so common that we might even overlook their significance. In the United States, birth certificates serve as proof of an individual's age, citizenship status, and identity. They are necessary to obtain a social security number, apply for a passport, enroll in schools, get a driver's license, gain employment, or apply for other benefits.

A Social Security number is a unique identifier that is used in the United States, not New Zealand. As the Department of Justice specifies, an SSN is needed for tax purposes, obtaining a driver's license, registering a vehicle, receiving federal benefits or enforcing child support. The only relevant result on the Social Security Administration website that mentions state property discusses the transformation of the social sector in post-Soviet Russia. When a baby is born in a U.S. hospital, parents can apply for an SSN simultaneously with a birth certificate. Non-citizens also receive SSNs when they are authorized to work in the United States.

Similarly to the United States, New Zealand's IRD number is needed primarily for tax purposes and receiving benefits. According to the New Zealand government website, parents or guardians can apply for one while registering a baby's birth. Minors are generally not mandated to have an IRD number, with a few exceptions:

Your child will need an IRD number if they:

Henaghan added that an IRD number "has nothing to do" with the case of Baby W or the guardianship order granted by the court.

New Zealand's government resources say nothing about parents or children becoming property or a ward of the state either.

According to the FBI website, SID stands for a state identification number issued by U.S. state-level authorities that contains "criminal justice information about an individual" and "is tied to a single person positively identified by fingerprints."

However, it is not the only use of SIDs. For example, in 2015, the state of Michigan issued a press release saying:

A SID should no longer be considered to indicate the existence of a criminal record. Rather, a SID now indicates the existence of one or more sets of fingerprints on file in Michigan for a particular subject.

Thus, even the fact of having a SID does not automatically imply that a person is a "ward of the state" or its "property."

Another Lead Stories fact check about birth certificates and the state can be found here.