Did Elon Musk file a billion dollars in lawsuits against "totally unprepared" Kathy Griffin? No, that's not true: The site that posted the story and a "Fact Check" follow-up is satirical. There are clearly marked disclaimers on the website that state everything on the site is a satirical work of fiction.

The claim appeared as an article (archived here) where it was published by The Dunning-Kruger Times on November 7, 2022, under the title "Elon Musk Files a Billion Dollars in Lawsuits Against 'Totally Unprepared' Kathy Griffin." It opened:

Kathy Griffin decided to get in a cute little spat with the richest man in the world, and now she'll have to pay for it. With everything she owns and will ever earn. 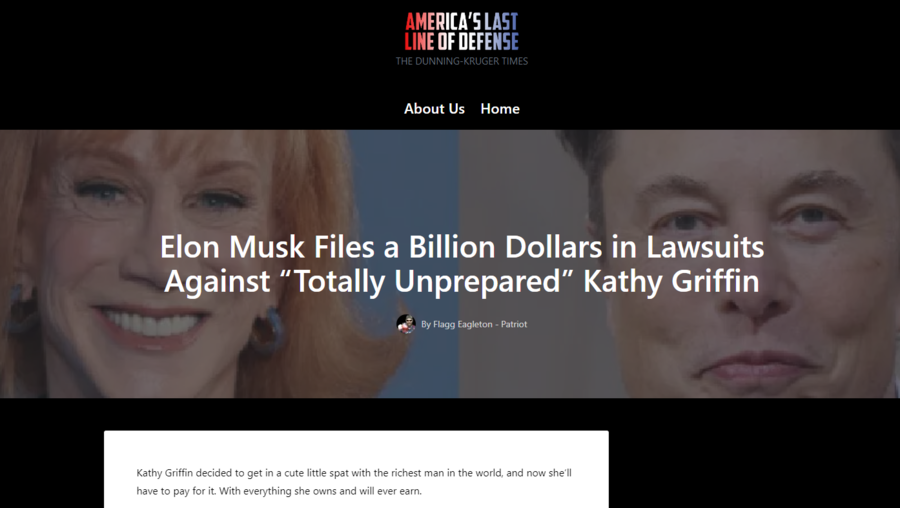 As the website clearly states, it is part of a "network of parody, satire, and tomfoolery," and notes, "everything on this website is fiction." However, other news sites have picked up the story without mentioning that the website from which it originated was a satire website and have reported it as factual news.

Another site in the satire network, Freedom Fictions, posted an article titled, "Fact-Check: True - Elon Musk is Suing the Pants Off of Kathy Griffin." The article claimed, "We were able to independently verify the source of all of that information, therefore, we rate the claim as true," with this graphic:

Just as The Dunning-Kruger Times explains that it is a satire website, so does the "About Us" section on Freedom Fictions.

Christopher Blair, the individual behind this satire site network, is a self-professed Maine-based liberal who for years has run networks of websites set up to troll conservatives with made-up news items in order to get these conservatives to share his posts. Blair often goes by the nickname "Busta Troll." A 2018 BBC profile called Blair "the godfather of fake news" and "one of the world's most prolific writers of disinformation."

Blair's websites usually have multiple disclaimers about their satirical content. They also can feature nonsensical category names, like "Have A Scone They're Delicious" on the archived America's Last Line of Defense website.

The stories themselves often contain hints that they are not real, such as links to "sources" that instead go to funny or offensive images. Another telltale sign is the name "Art Tubolls" (anagram for "Busta Troll") for characters in these stories.