#FIFAWorldCup #Messi𓃵
"The power of winning Worldcup", Messi will be on 1000 peso's bill, honored by Bank of Argentina.

It also featured a graphic with a similar claim.

This is how the tweet looked at the time of writing: 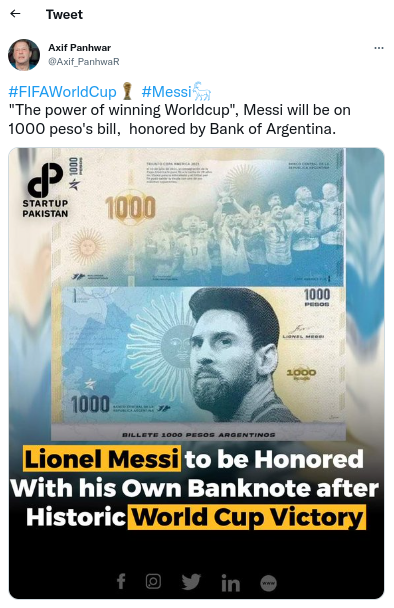 A search of the news included on the BCRA's website (archived here) also does not reveal any plans to make Messi the face of the 1,000 pesos banknote. Lead Stories reached out to the BCRA and will update this story with any relevant response.

The claim seems to have originated from an article published on December 19, 2022, on El Financiero, a Mexican news publication, which claimed that the Messi banknote idea "was 'jokingly' proposed by members of the Argentine Central Bank" (translated from Spanish to English using Google Translate). However, this clarification is only made toward the end of the story.

Other Lead Stories fact checks related to the World Cup can be found here.