Did police in Washington, D.C., arrest top virologist Dr. Anthony Fauci after Twitter CEO Elon Musk released information that Fauci lied about COVID-19 research and imposed unnecessary restrictions on Americans? No, that's not true: The claim appears in a story on a site that publishes satirical takes on the news.

The claim appeared in a December 27, 2022 article by the Vancouver Times with the headline "Anthony Fauci arrested after document dump become public." It opened:

The infamous Doctor Fauci has been arrested at his home in Washington after Elon Musk released a trove of files proving that he lied about gain of function research, and imposed unnecessary and unscientific Covid restrictions on the America population.

On the day of this writing, the Vancouver Times appeared to have removed the original story from its web page:

Here's how an archived version of the story appeared on the day of this writing: 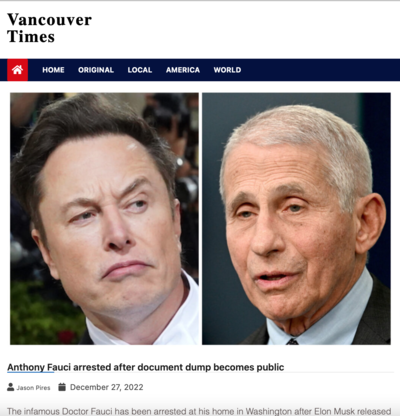 The Vancouver Times publishes satirical takes on the news as it notes on the "about" page of its website, stating that it has no affiliation with mainstream media outlets.

The Vancouver Times story provides no reasons for Fauci's alleged arrest or anything to substantiate the claim.

Musk and Fauci, who led the U.S. response to the COVID-19 pandemic and recently retired from his role as director of the National Institute of Allergy and Infectious Diseases, have recently traded barbs on social media after Musk tweeted that "My pronouns are Prosecute/Fauci."

Fauci has been a frequent target of false arrest claims since the start of the pandemic in 2020, including false claims reported by Lead Stories here, here, here and here.