Was America named after Morocco? No, that's not true: Neither the governments of Morocco nor of the United States of America recognize this North African country as America's namesake. There is no evidence from an authoritative source to support this claim, which derives from a larger theory previously debunked by Lead Stories. "There is no basis in fact whatsoever in these claims," the head of the Tangier American Legation Institute for Moroccan Studies told Lead Stories.

The claim appeared in a video published on Instagram on December 20, 2022. The clip opened with a male voice-over saying:

... the sultanate of Morocco was the ruler of America at one point. 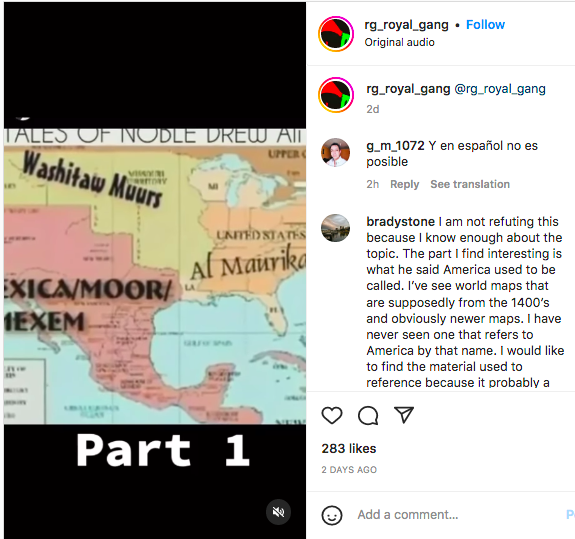 The claim about America being named after Morocco echoes a larger theory that claims that the original indigenous inhabitants of North America were Moors, the term used by Christian Europeans during the Middle Ages to refer to Muslim Black Africans from North Africa or the Arab conquerors of Spain.

In the U.S., these ideas were promoted by the Moorish Science Temple, mentioned in the video on Instagram. This movement originated in Newark, New Jersey, in the first quarter of the 20th century. However, experts previously confirmed to Lead Stories that there is no known evidence proving migration from Morocco to the present-day United States during the pre-Columbus era.

There is no basis in fact whatsoever in these claims. The Moorish movement in the States is an interesting one, but with all my respect, is built on completely unfounded claims. What *is* true is that Morocco and the U.S. have a long and close history: Morocco was one of the first countries to recognize the United States. In 1777, Sultan Moulay Mohammed Ben Abdullah included the U.S. in a list of countries to which he wrote offering protection off Morocco's coast from the Barbary pirates in order to build more trade and diplomatic relations. This was considered defacto recognition of the fledgling United States, which at that time was still hammering out its Constitution; he was the first world leader to offer such recognition. Later, in 1821, Sultan Moulay Souleiman offered the Legation to the US government, it is now the oldest continually owned US diplomatic property in the world. Morocco had nothing, however, to do with the naming of the U.S.

The Kingdom of Morocco's U.S. embassy makes no mention of America having been named in the North African country's honor, describing a history of its ties with the United States.

The U.S. Embassy in Morocco describes the country "as one of the first states to seek diplomatic relations with America," but, again, does not state that Morocco is America's namesake.

The Merriam-Webster dictionary explains how America got its name:

German cartographer Martin Waldseemüller is credited with first using the name America in 1507 on a large 12-panel map based on traveling accounts of explorers of the New World, and in particular those of Italian explorer Amerigo Vespucci. [...]

Waldseemüller labeled the part of the world that he envisioned as explored by Vespucci, America, feminizing the Latin form of Vespucci's given name, Americus. He chose the feminine form to be consistent with the Latinized names of other countries at the time, such as Europa and Asia. It was geographer Gerardus Mercator who extended the name America to include all of the Western Hemisphere.

The dictionary adds that, at some point, the word "Columbia," which originated from Christopher Columbus's last name, was used as a synonym for "America," but with time, this use of the word ceased to exist. Webster's does not discuss any connection between "America" and Morocco.

The Library of Congress, in turn, confirms that America was named after Vespucci. It mentions another alternative name, but it is still not "Al-Maurikanus:"

The earlier Spanish explorers referred to the area as the Indies believing, as did Columbus, that it was a part of eastern Asia.