Did the staff of presidential candidate Joe Biden and the Democratic National Committee suppress political speech leading up to the 2020 election against then-President Donald Trump when it requested certain tweets be reviewed? No, that's not true: all of the deleted tweets we were able to review apparently violated Twitter's Terms of Service -- in particular, the rule that forbids sharing explicit sexual images or videos without a person's consent.

The implied claim appeared in two tweets (archived here). Journalist Matt Taibbi published both on December 2, 2022. The first one said:

8. By 2020, requests from connected actors to delete tweets were routine. One executive would write to another: 'More to review from the Biden team.' The reply would come back: 'Handled.' 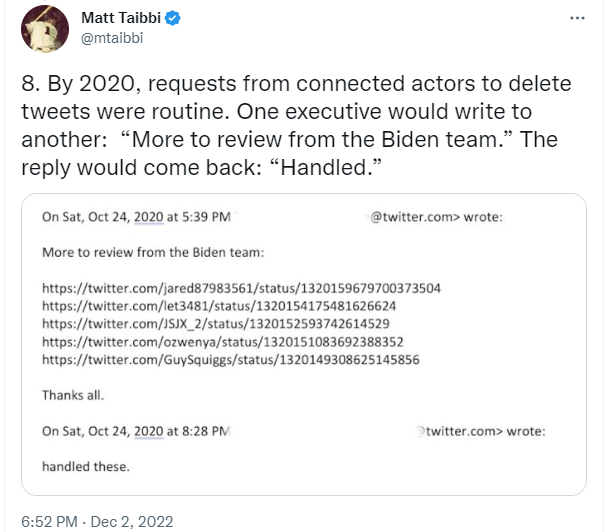 The claim continued in a second post to Twitter (archived here) also published by journalist Matt Taibbi on December 2, 2022. It said:

9. Celebrities and unknowns alike could be removed or reviewed at the behest of a political party: 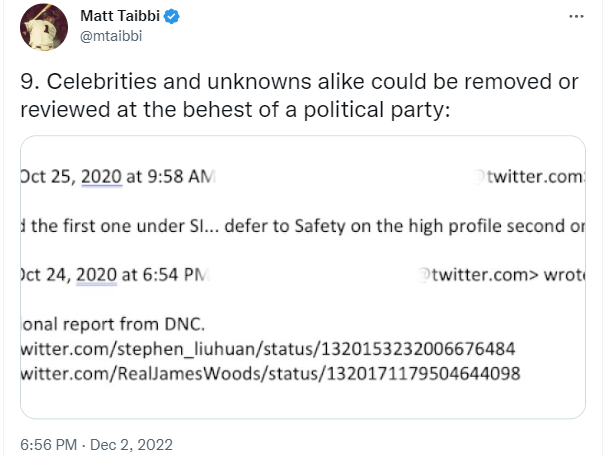 The two tweets come from a series of Twitter posts by Taibbi. He calls the thread, which totaled 36 tweets as of December 5, 2022, "THE TWITTER FILES." Twitter CEO Elon Musk released the emails included in the tweets to Taibbi that show company employees debated how to handle the 2020 New York Post story on Hunter Biden's laptop.

The two Taibbi tweets researched by Lead Stories identify seven links to other tweets that have been deleted. Online archives show at least six of the deleted tweets contained explicit images or linked to explicit video so the abbreviation "SI" referenced in the image in the second Taibbi tweet presumably refers to "Sexual Imagery". One of them included the phrase "Hunter Biden's Sex Tapes." and linked to explicit videos showing Hunter Biden. Another one included a video and used the Chinese phrase "炸弹来袭💣，快看亨特.拜登的风流视频" which Google Translate renders as "The bomb is coming💣, watch Hunter Biden's romantic video" in English. (It is unclear what was in the seventh deleted tweet as we found no references to it in any of the online archives we consulted)

While political speech is broadly protected by the U.S. Supreme Court in the public square, and the owners of Twitter at the time allowed the publishing of "consensually produced adult content" they drew the line at images or videos shared without the consent of the people involved.

Twitter's Non-consensual nudity policy in force at the time said:

...you can’t post or share explicit images or videos that were taken, appear to have been taken or that were shared without the consent of the people involved.

According to the policy, violations could be reported by "anyone" or in some cases "by authorized representatives" of the people depicted.

Lead Stories found archived versions of the deleted tweets by searching for the original links on the Internet Archive's Wayback Machine, which chronicles information posted to the web. Anyone on the internet can save a link on the website.

Lead Stories chose not to provide links to all the deleted tweets because some include images of male genitals, but readers can search for them by using the same site. Here's a screenshot of one of the archived posts: 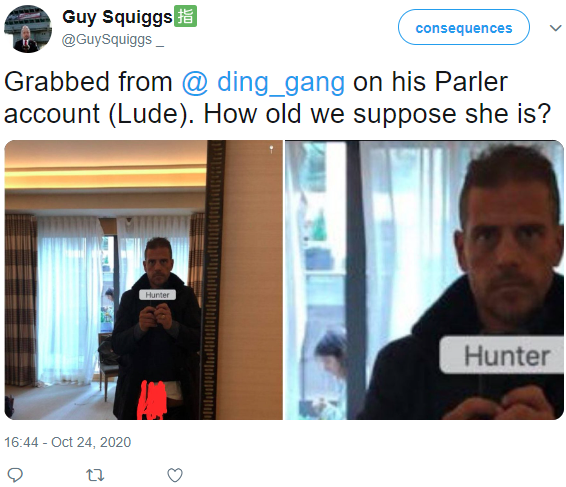 One of the other deleted tweets was from conservative actor James Woods, which Lead Stories found on the Internet Archive here. Woods didn't describe the contents of his deleted tweet but did express his displeasure over the post being removed from Twitter. In a December 5, 2022, tweet, he said:

Never in my life did I imagine my speech would be suppressed on the world's biggest forum by the central committee of a political party. This is something out of a Stasi spy novel. #TWITTERGATE

The "speech" in question appears to have been a non-consensually shared nude picture of Hunter Biden and a reference to foot sex.