Was Andrew Tate found guilty and sentenced to 14 years in prison as of January 24, 2023? No, that's not true: The former kickboxing champion and internet influencer remained in detention as of January 24, 2023, but had not been tried, convicted or sentenced. He was arrested in late 2022 on suspicion of human trafficking, rape and participating in organized crime.

Andrew Tate Found Guilty And Sentenced To 14 Years In Prison... 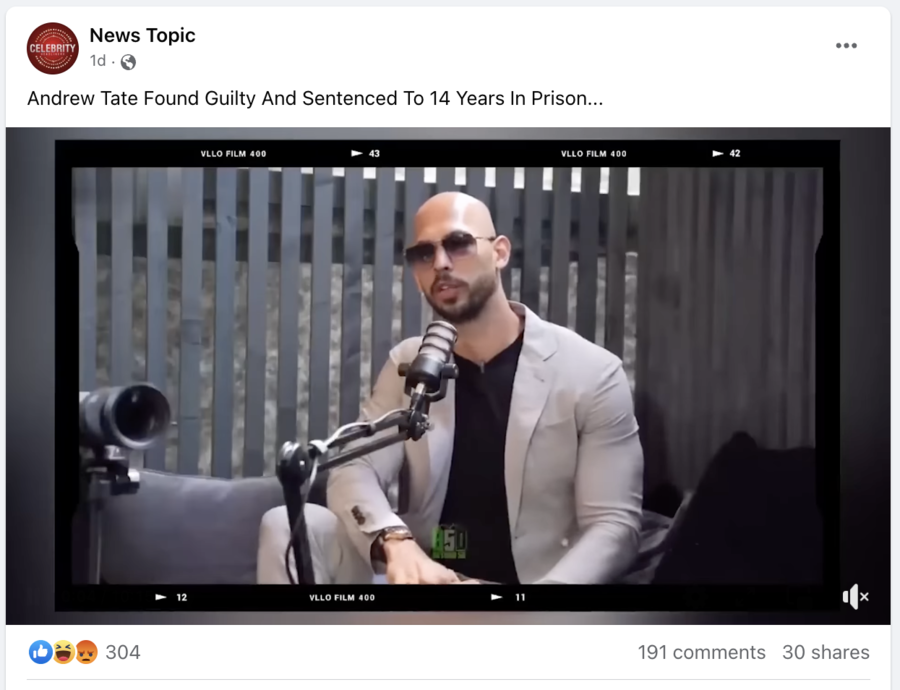 None of the video in the post supports the claim that Tate was found guilty and sentenced to 14 years in prison. The footage is just a hodgepodge of Tate talking, details of the allegations against him and pleas to subscribe to the channel behind the post.

Tate, who holds dual U.S. and British citizenship, was arrested in Romania on December 29, 2022, along with his brother and two other men on charges of human trafficking, organized crime and rape, according to police.

A court ordered all four men to be held in pretrial detention for 30 days on December 30, 2022. A judge subsequently approved a 30-day extension, meaning the four individuals will be detained until at least February 27, 2023.

As Tate remains behind bars, there has been no trial -- much less a conviction or sentence -- as of January 24, 2023, when this fact check was written.

Lead Stories reached out to Ramona Bolla, a spokeswoman for Romania's Directorate for Investigation Organized Crime and Terrorism (DIICOT), to ask about the case. She said that suspects can be held in pre-trial detention for no longer than 180 days and that "prosecutors are trying their best to work within that time frame."

We also reached out to Tate's attorney, Eugen Vidineac, to ask about the case. We will update this story, as appropriate, if we receive a response.

Tate maintains his innocence. Since his arrest, his Twitter account has remained active, although it's unclear whether Tate himself is posting. A tweet posted to his account on January 19, 2023, reads: "I'm in detention as they 'look' for evidence. Evidence they will never find because we are not guilty." Tate's full post can be read below:

I'm in detention as they "look" for evidence.

Evidence they will never find because we are not guilty.

They have and will continue to ignore and throw away any and all testimony or hard evidence we are innocent.

My case isn't about the truth.

This is about Politics. https://t.co/1XExhveYNb

Lead Stories has debunked several claims about Tate. For example, we showed he was not arrested because of a speech he gave about the "matrix" -- a rigged societal system he claims is designed to benefit only the rich. We also proved that he was still in detention as of January 3, 2023. See here for all of our articles on Tate.