Did the Centers for Disease Control and Prevention (CDC) admit that COVID-19 vaccines were created as part of a "depopulation kill plan"? No, that's not true: The CDC has never described COVID vaccine programs as a "depopulation plan." There is no record of the health agency having made this statement, and an article claiming as much did not cite any official sources. It only referred to VAERS data, which is inherently limited. As the CDC notes, "VAERS data alone cannot determine if the vaccine caused the reported adverse event."

The claim originated in an InfoWars article published on January 11, 2023, titled "COVID Depopulation Kill Plan Admitted by CDC as VAERS Data Released" (archived here). An introduction to the article read:

In what Alex Jones called the most ultra-massive news on Covid vaccines so far, the CDC released the results of its VAERS safety signal monitoring admitting the experimental jabs are the most deadly of all time. 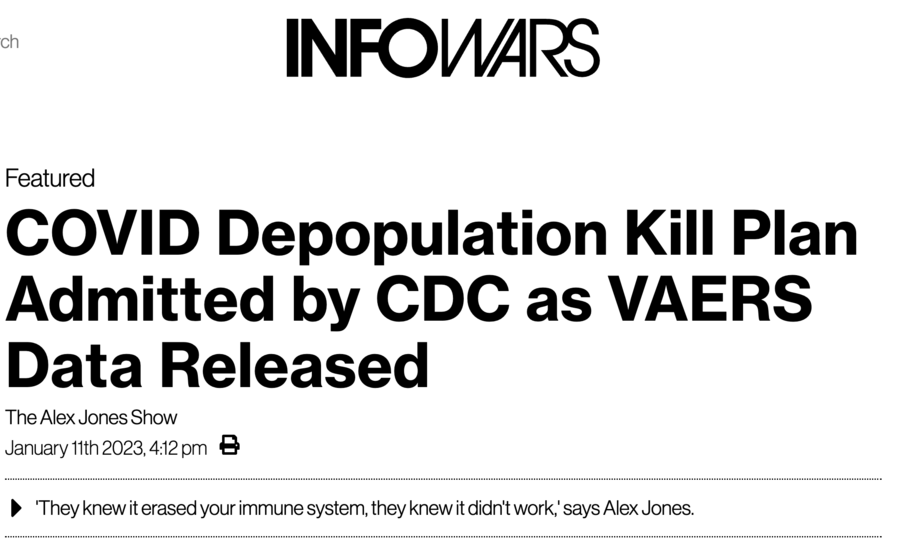 Included in the article was a 38-minute video of the "Alex Jones Show," hosted by conspiracy theorist Alex Jones. Jones offered several "documents" that he claimed provided evidence that the CDC knowingly rolled out COVID vaccines that were proven to be harmful. One such article cited by Jones was another InfoWars story, also published on January 11, 2023, titled "CDC Finally Releases VAERS Safety Monitoring Analyses For COVID Vaccines." This article claimed that:

Neither InfoWars article mentioned above included links to the CDC data or an official report, but, rather, to several other articles that made similar claims -- also without including links to official data, documents or other evidence to support their arguments.

At the end of footage from an interview with British anti-vaccine activist Michael Yeadon, a former pharmacologist, Jones says that Yeadon will address the "depopulation plan" in "the next hour" of his show, but the article contains no link to this segment of the show. Lead Stories could not find the relevant segment in an archive of the "Alex Jones Show."

The reference to a "depopulation kill plan" appears to be a clickbait headline.

Lead Stories contacted the CDC and requested the specific data referenced in the InfoWars article. When we receive a response, we will update this fact check accordingly.

However, the CDC has stated explicitly that VAERS records cannot be used to establish a causal link between vaccines and adverse health outcomes. VAERS tracks adverse events that occur following vaccination, based on individuals volunteering this information. Anyone can submit information. These responses are not verified by medical professionals, health officials or in any way validated. As the Department of Health and Human Services, which co-manages VAERS with the CDC, notes:

Anyone, including Healthcare providers, vaccine manufacturers, and the public can submit reports to the system. While very important in monitoring vaccine safety, VAERS reports alone cannot be used to determine if a vaccine caused or contributed to an adverse event or illness. ...

VAERS reports may contain information that is incomplete, inaccurate, coincidental, or unverifiable. Reports to VAERS can also be biased. As a result, there are limitations on how the data can be used scientifically. Data from VAERS reports should always be interpreted with these limitations in mind.

VAERS is considered an early detection system -- it can "detect an early hint or warning" regarding a potential safety problem with a vaccine. Generally, it does not establish a correlation or causation. Rather, VAERS complements other programs less prone to the variables of self-reporting, including the CDC's Vaccine Safety Datalink and Clinical Immunization Safety Assessment Project, as well the Food and Drug Administration's Biologics Effectiveness and Safety system.

Limitations of publicly available VAERS data, as noted by the CDC, include:

This specific limitation has caused confusion about the publicly available data, specifically regarding the number of reported deaths. In the past there have been instances where people misinterpreted reports of death following vaccination as death caused by the vaccines; that is a mistake.