Does a photograph on social media show a young Joseph Ratzinger, the future Pope Emeritus Benedict XVI, doing the Nazi salute? No, that's not true: The photo is cropped. The original photograph shows Ratzinger with both arms raised; not just his right one.

The cropped image was included in a tweet (archived here) published on December 31, 2022, the date of the 95-year-old former pontiff's death. The photograph appeared alongside a Spanish-language caption that, translated into English, opened with:

The photo in the tweet, taken from a 2017 article about Benedict XVI in the Italian edition of Vanity Fair, has been cropped to show the German-born Ratzinger, pictured on the right, doing the Nazi salute. The uncropped, original photo dates from 1951 and shows Ratzinger and his brother, Georg, officiating at their first mass in Traunstein, Germany, according to the Vanity Fair caption. As can be seen here and below, this photo shows that neither Ratzinger had their right arm raised in the Nazi salute.

Rather, the Ratzingers had both arms raised to shoulder height -- a common posture for Catholic priests during the Our Father prayer, according to a professor of liturgy at the Regina Apostolorum Pontifical Athenaeum interviewed by the non-profit news agency Zenit. 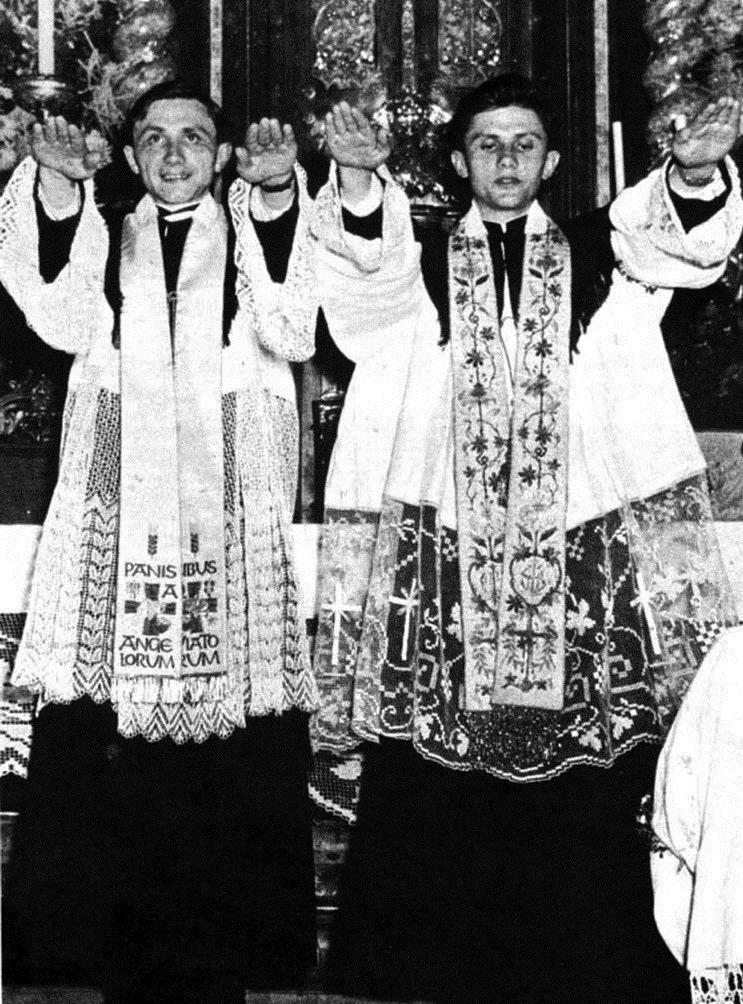 Benedict XVI, who headed the Catholic Church from 2005 to 2013, was the first pope in 600 years to resign from office. Born in the German city of Marktl am Inn in 1927, he grew up during World War II and joined the Hitler Youth as a teenager, as was required in Nazi Germany at that time. He was later drafted into the German military, but deserted in 1945.

Additional Lead Stories fact checks of claims related to the Catholic Church can be found here.