Angie wanted to bring in some extra dishes from the kitchen but there was no more room on the table. So she temporarily moved some decorative candles onto uncle Rick's chair which was empty because he went to the bathroom for a second. Before Angie got back from the kitchen with more food dear old uncle Rick was already back and in his seat again.

When a horrified Angie tried to point out her uncle's pants were on fire she was met with angry shushing from family members. "I thought we agreed not to talk politics at the table this year?", grumbled one aunt. Uncle Rick mumbled something through gritted teeth about "liberal media bias" and tried to explain away the smoke by saying there "wasn't always fire when there was smoke" and nobody should jump to conclusions and those flames "weren't even real".

He was last seen shouting he was fine at the paramedics loading him into the ambulance and blaming it all on "that damn Mexican food" he had eaten the day before. 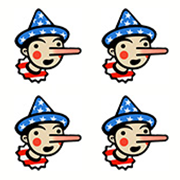 We tried to confirm the story by directly contacting Angie Holan but couldn't get her on the phone. Apparently she was on the line with a friend at the Washington Post who needed some parenting advice because her toddler just couldn't understand why a story about a wooden doll turning into a real boy could rate "Four Pinnochios" when there was clearly only one Pinnochio in the story.

If this is your first time visiting this website: welcome! Usually at Lead Stories we write exclusively about trending hoaxes, fake news and satirical stories that people might confuse for real news. And we're quite fast about it too, often being the first site on the scene when fake news strikes. You can read more about how we work here.