Known fake news website [email protected] published an article on May 22nd 2017 titled: "Five Rhino Poachers Killed By Four Angry Rhinos". It starts off like this:

A group of sick and tired rhinos killed five poachers on the weekend, the Kruger National Park reports.
According to the park, the men somehow managed to find their way into the park through the Malelani fence and headed to inner most part of the park on foot where there rhinos are.

The men were heavily armed, but that did not stop the rhinos from defending themselves. According to a CCTV footage, the men approached a group of rhinos and tried to attack the small one, thinking that the rest will flee. The rhinos however formed a circle surrounding the men armed with pangas and guns. 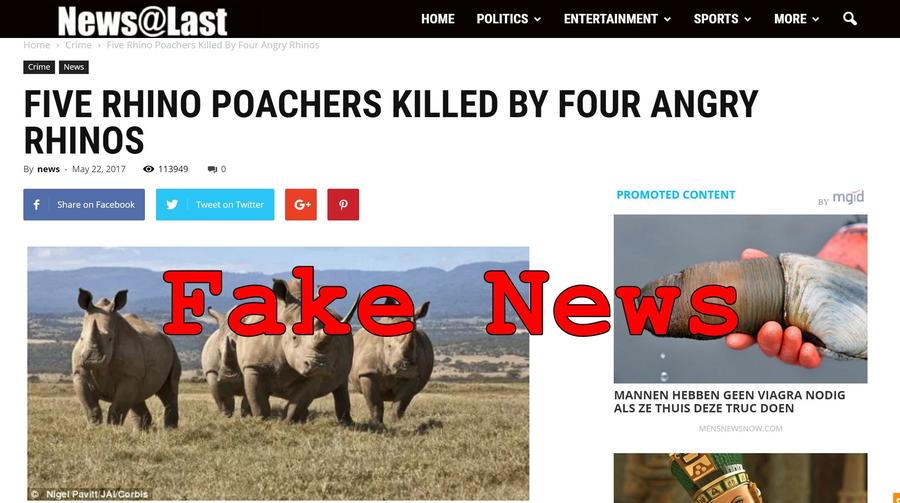 The photo of the rhinos has been used in a 2012 Daily Mail article about rhino poaching so it is highly unlikely it is an actual picture of the "killer rhinos". The article also claims there is CCTV footage of the incident but fails to show any. It lists the Kruger National Park as the source but we have been unable to find any press release or news bulletin put out by the park that confirms the story.

Furthermore the story specifcally mentions the "Malelani fence" as the entry point of the poachers. A Google News search for that term returns no results from official sources at all. Google does return one article from a non-news website that contains the term: the [email protected] article itself.

The story also doesn't list the names of the poachers or from anyone from the park that they spoke to.

Given all these facts and the abundance of advertising on the [email protected] site it is pretty clear the story is a hoax. Don't fall for it.