Were United Airlines pilots Jordan McPhee and Bayani Ceniza fired for having loud sex in the cockpit during a Manilla-Los Angeles flight? No, that's not true: the story was made up by a Canadian entertainment website that makes a living by publishing fictional stories often involving weird crimes, bizarre sex acts or strange accidents. It is not real.

The story originated from an article published byWorld News Daily Report on December 19, 2018 titled "United Airlines pilot and copilot fired for having loud sex together during flight" (archived here) which opened:

United Airlines announced this morning that it had fired two of its employees after they allegedly engaged in sexual intercourse in midflight while the plane's internal communication system was on. 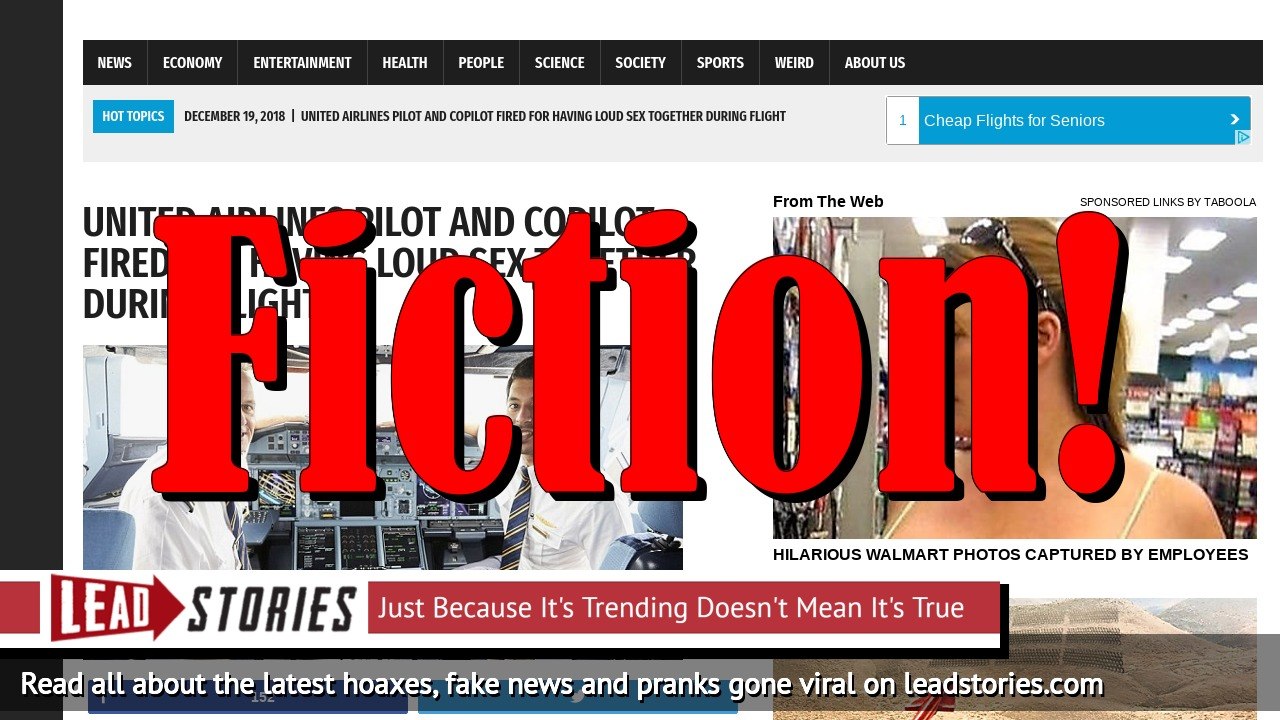 Users on social media only saw this title, description and thumbnail so they would not have known the story came from a fiction website:

United Airlines announced this morning that it had fired two of its employees after they allegedly engaged in sexual intercourse in midflight while the plane's internal communication system was on. 49-year old Jordan McPhee and 38-year old Bayani Ceniza were operating a Boeing 747 carrying 412 pass

The pilots in the picture that illustrated the story are actually Captain Thomas Ziarno and First Officer Abdulrahman Mohamed Al Busaeedi and they fly an Airbus 380 for Emirates Airline, not a Boeing 747 for United:

WATCH: 360° view of what happens in an Emirates A380 cockpit

Cape Town - Calling all aviation geeks! If you've always wanted to know what goes down in the cockpit of a major passenger plane, now is your chance. New 360° footage showing the entire cockpit of an Airbus 380 has been published by Emirates, complete with two pilots who act as guides to talk you through all those buttons and levers...

You can watch the video of them giving a tour in their cockpit here:

It is run by Janick Murray-Hall and Olivier Legault, who also run the satirical Journal de Mourréal, a satirical site spoofing the (real) Journal de Montéal. Very often their stories feature an image showing a random crazy mugshot found in a mugshot gallery on the internet or on a stock photo website superimposed over a background of flashing police lights or crime scene tape.

We wrote about worldnewsdailyreport.com before, here are our most recent articles that mention the site: