Did Kurt Russell share a poem titled "The Badge" that attacks the "defunding the police" movement? No, that's not true: An earlier version of the poem attributed to "unknown" appeared in a Facebook post on June 7, 2020, but it did not include any mention of "defund the police." A more recent version purportedly shared by the actor does address "defund the police." There is no evidence Russell shared or wrote this poem.

The claim appeared in a post (archived here) where it was published on Facebook on August 9, 2020. The post began with the words "Amazing Post!" followed by this introduction to the poem attributed to Russell:

Yes... let's all join in the hatred of all police for the sins of a few. Let's defund one of the most important public institutions in our countries history. Let's have all badges removed and allow people to tend to their own safety and security. But before you do so, Let me tell you about the badge and the thousands of good men and women it represents.

"The Badge" poem followed the introduction falsely attributed to Russell:

This badge ran towards certain death as the Towers collapsed on 9-11.

This badge ran into the line of fire to save the people in the Pulse Night Club.

This badge sheltered thousands as bullets rained down from the Mandalay Hotel in Las Vegas.

This badge protected a BLM rally that left five officers dead in Dallas.

This badge ran into the Sandy Hook School to stop a school shooter.

This badge killed the Oregon District mass shooter in seconds.
This badge has done CPR on your drowned child.

This badge has fist fought the wife beater who left his spouse in a coma.

This badge has intentionally crashed into the wrong way driver to protect innocent motorists.

This badge has escorted the elderly woman across the street because she couldn't see well and was afraid to cross.

This badge has been covered by a mourning band to honor those who have sacrificed everything in service.
You may hate me because I wear it. But, I wear it with pride. Despite your hate and your anger, I will await the next call for help. And, I will come running without hesitation. Just like the thousands of men and women across this great nation.
This badge.

Every cop, cop friend, cop relative, and supporter should copy & paste!!!
I just like I did.

There is no evidence Russell shared either version of this poem. 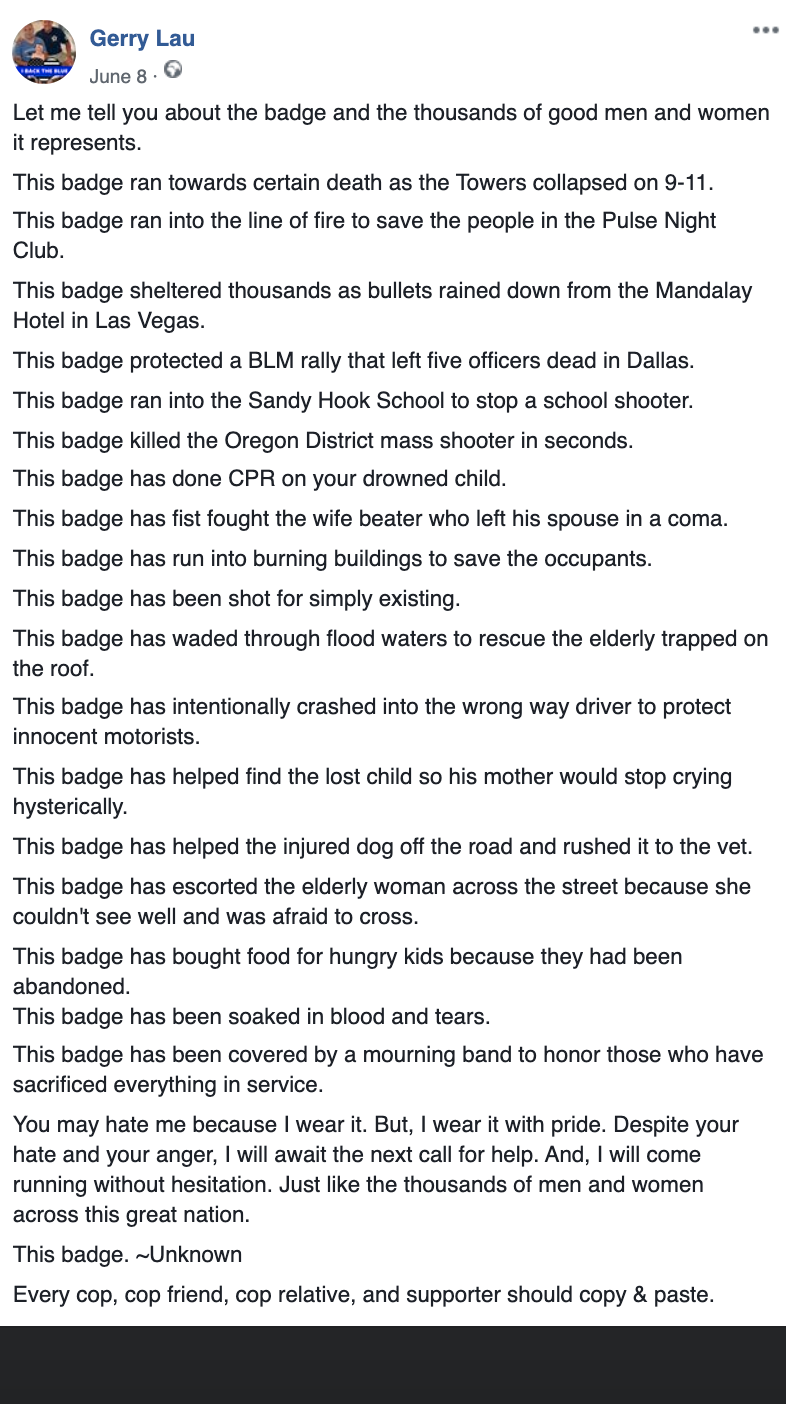 Russell has been the target of false claims before, and Lead Stories has debunked some of these bogus claims in the past:

PolitiFact and Snopes also conducted fact-checks on this claim about the poem attributed to Russell.