Did a math mistake by America's most visible pandemic fighter panic U.S. leaders into imposing strict quarantines? No, that's not true: A published claim by a Kremlin-controlled propaganda website offers no evidence that a statistic known as "case fatality rate" drove mayors and governors to order quarantines. At least one governor, Jay Inslee of Washington, focused on an entirely different metric. Even if "case fatality rate" were the driving force, a March 2020 editorial in the New England Journal of Medicine authored by Dr. Anthony Fauci, director of the National Institute of Allergy and Infectious Diseases, did not blunder, correctly stating what was known at that time about the ratio of fatalities to cases of both seasonal flu and COVID-19.

The "blunder" claim appears in an Opinion Page letter by Dr. Malcolm Kendrick (archived here) published Sept. 6, 2020, on the RT.com, which the U.S. State Department said is a Russian propaganda website, and titled: "The 1% blunder: How a simple but fatal math mistake by US Covid-19 experts caused the world to panic and order lockdowns." It opened:

In February, US Covid guru Anthony Fauci predicted the virus was 'akin to a severe flu' and would therefore kill around 0.1 percent of people. Then fatality rate predictions were somehow mixed up to make it look ten times WORSE." 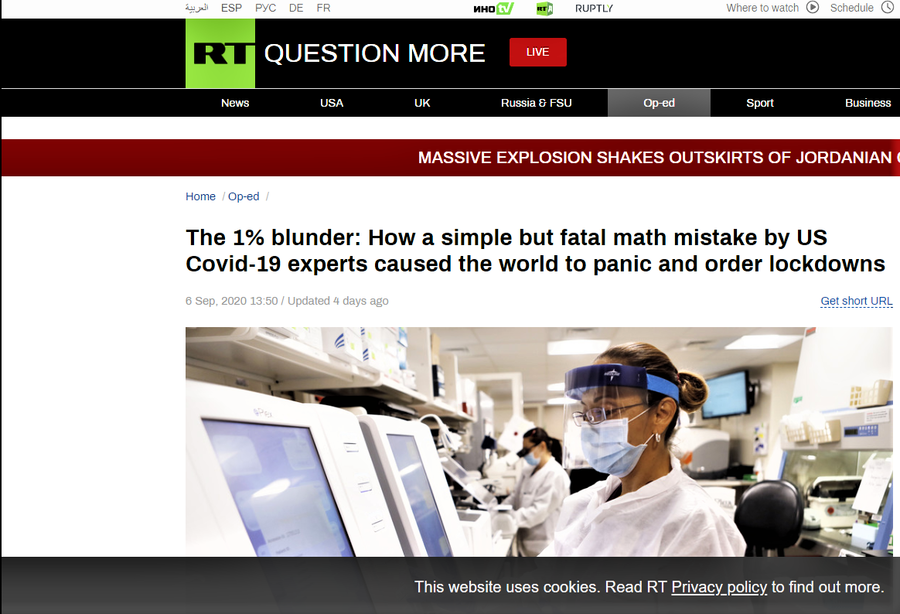 Contacted for comment on Kendrick's claim, the New England Journal of Medicine said Fauci did not err. Though asked, the Journal did not answer if a correction has been sought. In a Sept. 14, 2020, email to Lead Stories, NEJM Group Director of Communications and Media Relations Jen Zeis wrote:

The definition in our editorial is not only reasonable but is explicitly defined. There is no correction required."

Although it is likely impossible to say if one metric or statistic drove governors and mayors to impose severe quarantines, Lead Stories has reached out to the governors of the states with the worst outbreaks and/or the severest quarantines, a step Kendrick did not take before asserting that "Case Fatality Rate" was the determining factor.

Mike Faulk, press secretary to Washington Gov. Inslee, said the primary reason Inslee wanted to quarantine close contacts of people with COVID-19 was not the fatality rate, but the fact that people transmit the virus before they are symptomatic:

We issued the stay home order because we had rapid spread of COVID-19 in our population and knew our health care system would become overwhelmed (as happened in Wuhan and Italy) if transmission was not slowed."

Lead Stories will update this report, if appropriate, when the governors of Florida, New York, Texas and Virginia respond.

Lead Stories reached out to the National Institute for Allergy and Infectious Diseases for comment from Fauci. Lead Stories will update this report, if appropriate, when Fauci or his staff respond.

In the RT.com Opinion section article, Kendrick claims Fauci, a board-certified immunologist, made a semantic error (saying "case fatality rate" instead of "infection fatality rate") when comparing the dangers of COVID-19 to seasonal pneumonia, both in a New England Journal of Medicine article and in testimony to the U.S. House Committee on Oversight and Reform.

But Fauci didn't use those terms when speaking to Congress. The transcripts of the hearings Kendrick referred to show that neither those terms nor variants ("case fatality ratio," "infection fatality ratio," "IFR," "CFR") were used by Fauci nor any of his colleagues from the National Institute of Allergy and Infectious Diseases.

Lead Stories reached out to Kendrick to ask for the specific time code or transcript segment showing Fauci misusing the terms or making the wrong comparison. In a Sept. 10 email to Lead Stories, Kendrick would only say: "I refer to the paper referenced in my piece on RT-com," apparently meaning that he relied not on transcripts nor on reporting from the hearings, but on Disaster Medicine and Public Health Preparedness, a journal that published an article by Ronald B. Brown, a Ph.D. from the University of Waterloo, Ontario. Brown's paper says the comments were made March 11 to the House Committee on Oversight and Reform.

This link supplies the text of formal submitted remarks by Fauci and his team, in which the terms are not used.

Those terms don't show up in the searchable transcript of the C-SPAN video of the March 11 hearing, embedded next:

Nor do Fauci and his team use the terms in the March 12 continuation of the hearing (embedded next, with searchable transcript):

What follows is C-SPAN's transcript of what Fauci did say, at 1:37:12 of the first day of the hearings. Note he does not use the disputed terms, instead distilling what was known at that time into a description of COVID-19's lethality:

YES. THANK YOU FOR THE QUESTION. WELL, SARS WAS ALSO A CORONAVIRUS IN 2002. IT INFECTED 8,000 PEOPLE, AND IT KILLED ABOUT 775. IT HAD A MORTALITY OF ABOUT 9 TO 10%. SO THAT'S ONLY 8,000 PEOPLE. IN ABOUT A YEAR. IN THE TWO AND A HALF MONTHS THAT WE'VE HAD THIS CORONAVIRUS, AS YOU KNOW, WE NOW HAVE MULTIPLE MULTIPLES OF THAT. SO IT CLEARLY IS NOT AS LETHAL, AND I WILL GET TO THE LETHALITY IN A MOMENT, BUT IT CERTAINLY SPREADS BETTER. PROBABLY, FOR THE PRACTICAL UNDERSTANDING OF THE AMERICAN PEOPLE, THE SEASONAL FLU WE DEAL WITH EVERY YEAR HAS A MORTALITY OF 0.1%. THE STATED MORTALITY OVERALL OF THIS WHEN YOU LOOK AT ALL THE DATA, INCLUDING CHINA, IS ABOUT 3%. IT FIRST STARTED OFF AS 2% AND NOW 3%. I THINK IF YOU COUNT ALL THE CASES OF MINIMALLY SYMPTOMATIC OR ASYMPTOMATIC INFECTION, THAT PROBABLY BRINGS THE MORTALITY DOWN TO AROUND 1%, WHICH MEANS THIS IS TEN TIMES MORE LETHAL THAN THE SEASONAL FLU. I THINK THAT'S SOMETHING THAT PEOPLE CAN GET THEIR ARMS AROUND AND UNDERSTAND.

Like Fauci, experts at Johns Hopkins University and elsewhere estimate COVID-19 is 10 times more lethal than seasonal flu. COVID-19 data as of the date of this writing are provisional: a running tally subject to revisions and corrections once all death certificates and public health surveillance data are finalized when the pandemic is defeated or dies out.

In the New England Journal of Medicine editorial written by Fauci and two colleagues, he did use the terms Kendrick, a general practitioner from Scotland, focuses on. In looking at other scholarly articles of the time, Fauci appears to have used the same terms and comparisons as other authors of articles published in professional journals: COVID-19 is about 10 times more likely to kill than seasonal flu, but not as bad as prior coronavirus outbreaks.

If one assumes that the number of asymptomatic or minimally symptomatic cases is several times as high as the number of reported cases, the case fatality rate may be considerably less than 1%. This suggests that the overall clinical consequences of Covid-19 may ultimately be more akin to those of a severe seasonal influenza (which has a case fatality rate of approximately 0.1%) or a pandemic influenza (similar to those in 1957 and 1968) rather than a disease similar to SARS or MERS, which have had case fatality rates of 9 to 10% and 36%, respectively.

Kendrick's certainty about the terminology and data and their meaning, which underpin his attack on Fauci's testimony, is not shared by all public health experts.

For instance, Steven H. Woolf, M.D., M.P.H. at Virginia Commonwealth University, is lead author on a March 2020 article for the Journal of the American Medical Association's blog: Insights. In it, Woolf and his colleagues say there's still not enough hard data on COVID-19 deaths to make definitive comparisons, but that the Diamond Princess cruise ship outbreak, by virtue of its offshore isolation, is one of the few outbreaks for which there is complete data and they support the general idea that COVID-19 is more serious than seasonal flu:

In a Sept. 11, 2020, email to Lead Stories, Woolf, who teaches population health at Virginia Commonwealth, said the Russia Today opinion column focused on semantics at a time when little was known about the pandemic:

While there is certainly a distinction between IFR and CFR, I think the writer is making a bit too much of it and ignoring the forest for the trees. Missing from the essay is the large degree of scientific uncertainty about the mortality of COVID-19 that plagued us at that time, whether one was discussing IFR or CFR. In other words, the bigger issue was the wide cone of uncertainty surrounding point estimates."

NewsGuard, a company that uses trained journalist to rank the reliability of websites, describes rt.com as:

The website of RT America, a 24/7 TV news channel and Russian government disinformation and propaganda effort. RT was previously known as Russia Today.