Did Democratic presidential nominee Joe Biden say he was raised in a "Black Baptist Church," despite also saying he has been a "practicing" Catholic all his life? That claim is partially true, but it's missing context: Although Biden has said he was raised in a "Black church," while referencing a Baptist church in Delaware, it was in the context of the Civil Rights work he did as a young adult. Those comments do not contradict his longstanding devotion to the Catholic Church when you examine Biden's full sentence.

The claim appeared as a meme in a post (archived here) on Facebook on October 21, 2020, under the title "The Guy even lies before God." It said:

Biden says he was raised in a Black Baptist Church. Wait a minute - he said he's been a 'practicing' Catholic all his life!

The claim has been circulated in a number of other instances, including in this post on Twitter on October 12, 2020: 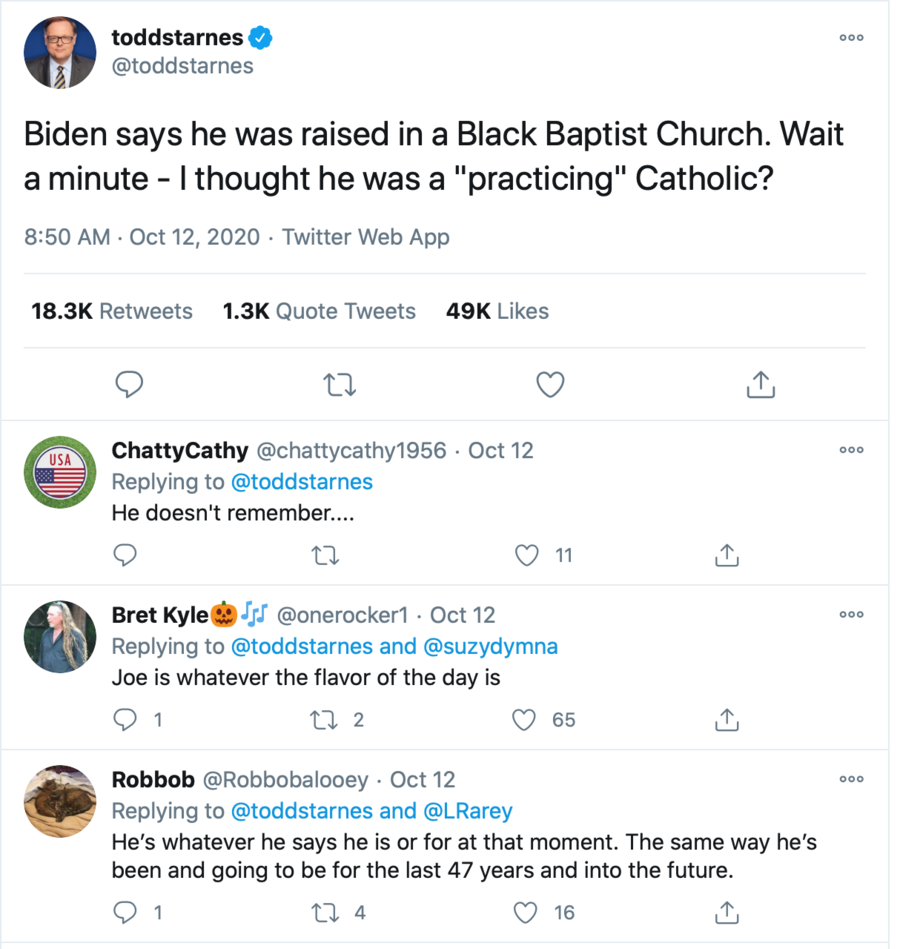 During a speech on June 28, 2019, at the Rainbow PUSH Coalition Convention in Chicago, Biden mentioned being "raised in the Black church," while referencing Rev. Dr. Otis A. Herring and the Union Baptist Church, in Wilmington, Delaware. But he discussed it in the context of the Civil Rights movement. He said:

"Before we'd organize, you'd go in and sit in Reverend Herring's church and sit there before we'd go out and try to change things when I was a kid in college and high school."

In a speech on January 19, 2020, at the Bethlehem Baptist Church in Columbia, South Carolina, Biden highlighted his Catholic faith before once again discussing his involvement in the Baptist church in Delaware. He said:

"I'd go to eight o'clock Mass, then I'd go to Reverend Herring's church where we'd meet in order to organize and figure where we were going to go, whether we were going to desegregate the Rialto movie theater, what we were going to do. I got my education, for real, in the Black church, and that's not hyperbole, it's a fact."