Is it true that Democratic presidential nominee Joe Biden plans to raise taxes on 82% of Americans the day he takes office, should he win? No, that's not true. Biden has repeatedly said that his plan only calls for increasing taxes for those making $400,000 or more. The math used by Republican officials to state that 82% of U.S. residents will pay taxes on Day One is faulty. Under 10% of Americans fall into the tax brackets that Biden would target for an increase.

The claim, which has been debunked before, appears in a tweet (archived here) on October 17, 2020, by Ronna McDaniel, the GOP national committee chairwoman, on Twitter. The tweet read:

Joe Biden promised on Day 1 to raise taxes on 82% of Americans...in the middle of an economic recovery. We cannot afford Biden!

This is false. But it's not the first time that the claim has been made. President Trump's son, Donald Trump, Jr., has tweeted it out before, but the math used to arrive at the figure is wrong. Put simply, 82% of Americans do not make $400,000 or more.

I'm not sure what planet YOU live on Ronna, but 82% of Americans don't make $400K or more each year pic.twitter.com/igySgiWNW4

Statista ran this chart on October 9, 2020, showing household income distribution for 2019 in the U.S. Reviewing available data, the chart clearly shows that not even 10.3% of Americans would fall into the $400,000-plus income level: 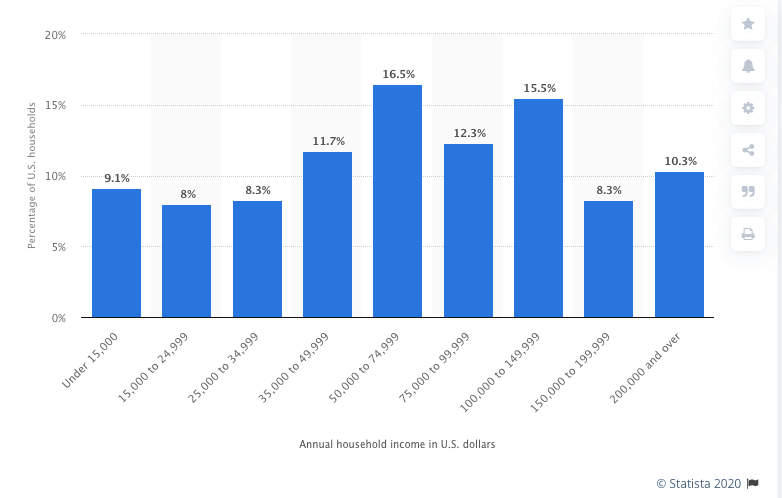 The text below the chart reads:

Income and wealth in the United States

After the economic recession in 2009, income inequality in the U.S. is more prominent across many metropolitan areas. The Northeast region is regarded as one of the wealthiest in the country. Maryland, New Jersey, and Massachusetts were among the states with the highest median household income in 2019. In terms of income by race and ethnicity, the average income of Asian households was 98,174 U.S. dollars, while the median income for Black households was less than half of that figure.

Poverty and race in the United States

The U.S. Census Bureau annually updates its list of poverty levels. Preliminary estimates show that the average poverty threshold for a family of four people was 26,167 U.S. dollars in 2019, which is around 460 U.S. dollars more than the previous year. There were an estimated 34 million people inpoverty across the United States in 2019, which was around ten percent of the population. Approximately 19 percent of those in poverty were Black, while seven percent were white.

Joe Biden wants to raise taxes on 82% of all Americans.

The September 22, 2020, story included this about Bob Good, who is running as a Republican in Virginia's 5th Congressional District:

Good, a former Campbell County supervisor, made the claim during a Sept. 9 candidates forum with Democratic nominee Cameron Webb, a physician.

"We need to preserve and expand the Trump tax cuts," Good said. "Biden has already announced that he and my opponent would raise taxes by $4 trillion on 82% of Americans who would experience a tax increase if Biden were elected (sic),"

Here is the YouTube video of the claim by Good:

All of these claims are debunked by not only simple math, as shown by the Statista chart, but also by checking with tax experts, including the Tax Policy Center, an independent group. On March 5, 2020, the center wrote:

High-income taxpayers would face increased income and payroll taxes. Biden's plan would roll back income tax reductions from the Tax Cuts and Jobs Act of 2017 (TCJA) for taxpayers with incomes above $400,000. It would also limit the value of itemized deductions for taxpayers in income tax brackets above 28 percent. His plan would tax capital gains and dividends at the same rate as ordinary income for taxpayers with incomes above $1 million and tax unrealized capital gains at death. Biden also would subject earnings over $400,000 to the Social Security payroll tax...

We estimate Biden's tax proposals (assumed to take effect January 1, 2021) would increase federal revenues relative to current law by about $4.0 trillion between 2021 and 2030, or 1.5 percent of gross domestic product over that period (table 1). 1 About half of the revenue gain would come from higher taxes on high-income households, and about half would come from higher taxes on businesses, especially corporations. Increasing the corporate tax rate to 28 percent would account for about one-third of the additional revenue (table A1). Applying Social Security taxes to earnings above $400,000 would account for about another quarter. Increased taxes on capital gains and dividends would account for another 11 percent of the revenue gain, and repealing the TCJA tax cuts for taxpayers with incomes above $400,000 would raise a similar amount of revenue over that 10-year budget window. The additional revenue would be partially offset over the period by more than $270 billion in tax credits and income exclusions for family caregiving, retirement saving, student loan forgiveness, energy efficiency, renewable energy, and electric cars.

The revenue gain generally grows throughout the 10-year period except in 2026, when it declines by $65 billion, and in 2027, when it declines by $10 billion. This is because certain provisions of the TCJA are set to expire or change. The TCJA's individual income tax cuts expire at end of calendar year 2025, so Biden's proposal to repeal them for high- income taxpayers raises less revenue in fiscal year 2026 and no additional revenue in later years.2 Similarly, the minimum tax on profits earned by foreign subsidiaries of US firms is scheduled to increase from 10.5 to 13.125 percent in 2026, so Biden's proposal to increase it to 21 percent raises less revenue from that year onward."

The Tax Foundation reported this, updated in September 2020: