Did Fox news cancel Judge Jeanine's show? No, that's not true. Fox News denied the claim, saying in an email to Lead Stories that her absence was due to "election coverage," and that she would be back on the air the following weekend.

"According to a report by Newsmax, the Fox News Channel has cancelled Judge Jeanine Pirro's show."

According to a report by Newsmax, the Fox News Channel has cancelled Judge Jeanine Pirro's show. The decision came after the network learned that the host planned to cover issues related to suspected fraud in the 2020 election.

Objectivist News reported that Pirro did not appear on Fox News on Saturday, November 7, 2020, (after the network called the presidential election for Democrat Joe Biden) because her show had been canceled, citing an on-air report on Newsmax. "The decision came after the network learned that the host planned to cover issues related to suspected fraud in the 2020 election," the website said. 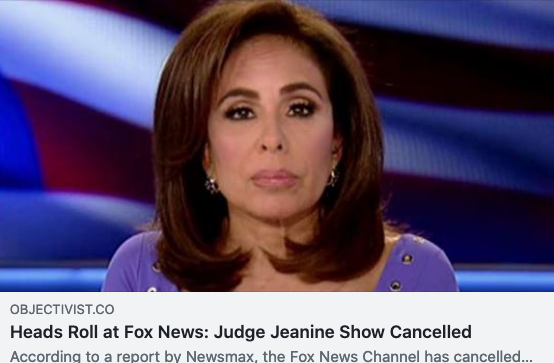 Rob Schmitt of Newsmax said on-air, "Her show has been suspended tonight and did not air over at Fox News Channel. Sources close to the network tell us that's because she made a very staunch defense of President Trump and wanted to expose or attempt to expose the voter fraud that the Trump campaign and Republicans allege took place."

In an email to Lead Stories, a Fox News spokesperson said the show has not been canceled:

Judge Pirro was never scheduled to be on due to ongoing election coverage and she will be back next week along with all regularly scheduled programming that was also preempted due to ongoing breaking news coverage.

NewsGuard, a company that uses trained journalist to rank the reliability of websites, describes objectivist.co as:

A conservative news site that does not disclose its perspective and does not run corrections.