Is the U.S. pushing an under-tested, dangerous coronavirus vaccine on unwilling people as part of a depopulation agenda? And was the virus man-made and weaponized in U.S. and Chinese labs? No, these claims are untrue. There are no plans to force people to be vaccinated, no vaccine has been approved, and there is no evidence the virus was created in labs by China and the U.S. In making the claims, Rizza Islam relies on discredited anti-vaccine conspiracist Judy Mikovits and Robert F. Kennedy, Jr., now a leader in anti-5G and anti-vaccine conspiracy circles.

The claims, and many more, appear in a video in an Instagram post (archived here) October 28, 2020, on the Rizza Islam account under the title "He Just Dropped BOMBS!" The text under the nearly 12-minute video reads:

Tag 3👇🏿👇🏿 - Rizza Islam brings FACT AFTER FACT and exposes the vaccine agenda under "Operation Warp speed " by Donald Trump set to active before 2021 and the overall vaccine agenda of the U.S government before and after Trump! Listen carefully and comment with your thoughts 🙏🏾✊🏿🔥☀️🌙⭐ #RizzaIslam #vaccines #Rizzawiththefacts #intellectualxtremist #WEAREFARRAKHAN #separationordeath

The video was taken down by YouTube, where it was also posted.

It features Islam -- who has no science training -- firing off conspiracies about the coronavirus and making four false claims:

1. The virus was made in labs in China and the U.S. and weaponized;

2. It's part of a depopulation strategy aimed at giving white Americans control of world natural resources;

3. The vaccine is under-tested and will be used to kill Black people;

4. The U.S. will use the military to force people to take the vaccine.

We address those claims in order:

1. Was the novel coronavirus man-made as a biological weapon in the U.S. and China?

So it was a joint connection between both nations. These are all facts ...They intended it to do something, but now it's not doing what it is that they intended for it to do. So America is getting hit with more cases, while Africa -- their cases have dropped almost completely. They expected it to hit Africa hard, like the other diseases that they create.

Multiple peer-reviewed papers in medical science journals by epidemiologists and virologists have found no evidence to support that the virus was a joint and purposeful effort by America and China. Lead Stories has debunked the idea that it was man-made here, and that it weaponized here. It was likely of animal origin, according to the World Health Organization. Here is a section of a Reuters report on the WHO's statement: "All available evidence suggests the virus has an animal origin and is not manipulated or constructed in a lab or somewhere else," WHO spokeswoman Fadela Chaib told a Geneva news briefing. "It is probable, likely, that the virus is of animal origin."

2. Is the coronavirus part of a depopulation effort targeted at the Black population, in Africa and in the U.S.?

Islam cites a 1974 policy paper, "Implications of Worldwide Population Growth For U.S. Security and Overseas Interests" written by the U.S. National Security Council under Henry Kissinger during the administration of President Gerald Ford. The paper argued rapid population growth in the least developed countries would destabilize those countries and U.S. national security, including access to minerals and other resources in those countries, and would be served by advocating birth control measures.

The paper does not advocate eradication of existing populations, and there is no public record of documentary, eyewitness or lab evidence to suggest the virus aims to kill Black people, nor does Islam cite any evidence. Lead Stories has debunked that the virus is a depopulation effort here. People of color have disproportionately been affected by COVID, but U.S. vaccine planners argue it's unclear if there is a genetic reason for that or if the difference is attributable to systemic racism in the U.S. and the resultant differences in living circumstances and healthcare.

3. Is there a dangerous untested vaccine and will it be used to sicken Black Americans?

It would be impossible to say "the vaccine" is unsafe, as there is not yet one approved-for-distribution vaccine and safety testing has not been completed. Two vaccine-makers have already canceled their vaccine development projects after early testing showed unacceptable risks. If there were a plot to kill people with vaccines, presumably an unsafe vaccine would be headed to market. Islam says the vaccine is getting a fraction of the usual testing for vaccines, and that Black Americans will be some of the first to whom it will be given and that they should not take it as it will be dangerous:

Tuskegee was a playground compared to what this is about to become. Tuskegee was less than 500 people. America has 328 million people, and they want to test it on black people first, after the health workers -- 50 million, roughly, black people are in America.

"Tuskegee" is a reference to a controversial 1932-through-1972 study based in Macon County, Alabama, in which United States Public Health Service workers deceived 600 poor sharecroppers, telling them they were being treated for their syphilis, when they were not. The study continued even after 1947, when it was known penicillin would cure them. Untreated participants spread the disease, which causes numerous serious health conditions and can be fatal.

Several potential COVID-19 vaccines are in the works, some in final trials, but none has been approved so far by the U.S. FDA. Operation Warp Speed is real, and it is true that vaccines could be approved in a fraction of the time it normally takes to develop and test vaccines. This has some worried about the vaccine's safety, but vaccine makers and the FDA have pledged, pushing back on President Trump, that the vaccine will not be released until it passes standard testing.

On the FDA's site for frequently asked questions about coronavirus and the disease it causes, COVID-19, it states "At this time there is no vaccine to prevent coronavirus disease 2019 (COVID-19). The FDA is working with vaccine developers and other researchers and manufacturers to help expedite the development and availability of medical products such as vaccines, antibodies, and drugs to prevent COVID-19. Read more about what the FDA is doing to mitigate the effects of COVID-19."

Second, there is no publicly available evidence that the U.S. has a secret plan to target Blacks first to "test" a vaccine. It is true that Black Americans could be among the first tiers of people to receive the vaccine in the U.S.; they have been among the hardest-hit populations in the U.S.

The plan, at the moment, is that health care workers will be first to get the vaccine, followed by workers in front-line industries like food, etc.
According to Nature, the phases for rolling out a potential vaccine are proposed by the U.S. National Academies of Sciences, Engineering, and Medicine (NASEM) as follows: 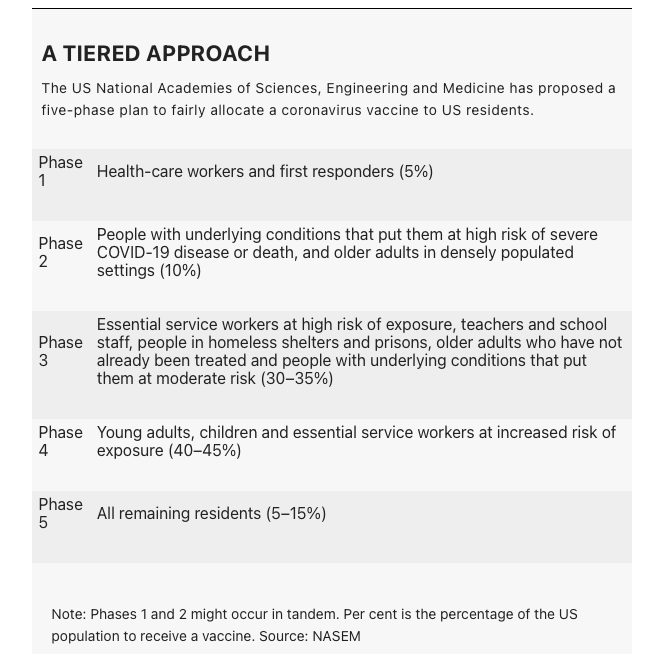 4. Will the U.S. military force the vaccine on unwilling Americans?

Currently, the coronavirus vaccine...is being pushed through what's called [Operation] Warp Speed under Donald Trump. It is in part a joint venture between the Department of Defense, the FDA (Food and Drug Administration), the CDC (Center for Disease Control and Prevention), HHS (Health and Human Services) and about three other organizations. So the military, they're using these Food and Drug Administration, all these different government organizations, to push this vaccine that...has not been tested fully. Not only has it not been tested fully, it has not been tested a 10th - 1/10th -- of the time that it takes to fully test it.

Those agencies and the military, all under Operation Warp Speed, have developed a plan to distribute the vaccine. But no one will be forced to take whatever vaccine is approved by the FDA. Once a vaccine wins FDA approval, it will be distributed by government, both federal and state, as well as private agencies. Here is the Trump administration's plan for distributing a vaccine.

Despite what President Trump has said about military delivery of the vaccine, The Department of Defense has repeatedly said to Lead Stories it expects to have little, if any, role in vaccine distribution, since adequate transportation systems are already in place.