Were 50,000 Chinese soldiers bombed and killed in Maine -- with the incident "listed as an earthquake"? No, that's not true: there was a minor earthquake in Maine on December 9, 2020, but there was no bomb involved and there weren't 50,000 Chinese soldiers killed. Military and local officials debunked the claim, with a Department of Defense official telling Lead Stories: "This did not happen."

The story appeared in an article published by Dark Outpost on December 10, 2020, titled "50,000 Chinese Soldiers Were Bombed And Killed In Maine Which Was Listed As An Earthquake - Dark Outpost" (archived here), which opened:

Hal Turner Radio Show has just Reported, "50,000 Chinese Soldiers were Bombed and Killed in Maine which was listed as an Earthquake." Then an F16 was taken down in Michigan. 3 Aircraft Carrier Battle Groups Deployed on the [...]

50,000 Chinese Soldiers Were Bombed And Killed In Maine Which Was Listed As An Earthquake - Dark Outpost

Hal Turner Radio Show has just Reported, "50,000 Chinese Soldiers were Bombed and Killed in Maine which was listed as an Earthquake." Then an F16 was taken down in Michigan. 3 Aircraft Carrier Battle Groups Deployed on the [...]

There is nothing to substantiate that 50,000 Chinese soldiers landed in Maine, let alone prove they were killed by a bomb. China has never invaded the United States and there are not tens of thousands of Chinese soldiers entering the U.S. from Canada, as Lead Stories previously debunked: Fact Check: Tens-Of-Thousands Of Chinese Soldiers Are NOT Quietly Massing On The Canadian Border Readying For Invasion Of The United States

"There is no evidence of a bomb being dropped," Ken Clark, chief of Calais Fire and Emerging Medical Services in Maine, told Lead Stories via telephone on December 15, 2020.

"We were called by our Washington County emergency director that she was notified by the states' seismological graph that we did have an earthquake that morning at 5," Clark said. "It indicated 3.0 (magnitude)."

Clark explained that he has frequently been in the area where it was claimed a bomb was dropped. "I've gone through that area," he said. "We've been researching our dam control plans because of the earthquake ...There is no evidence of a bomb being dropped."

A 3.0 magnitude earthquake is considered to be a minor quake. Here is an image from the USGS of the earthquake on December 9, 2020. 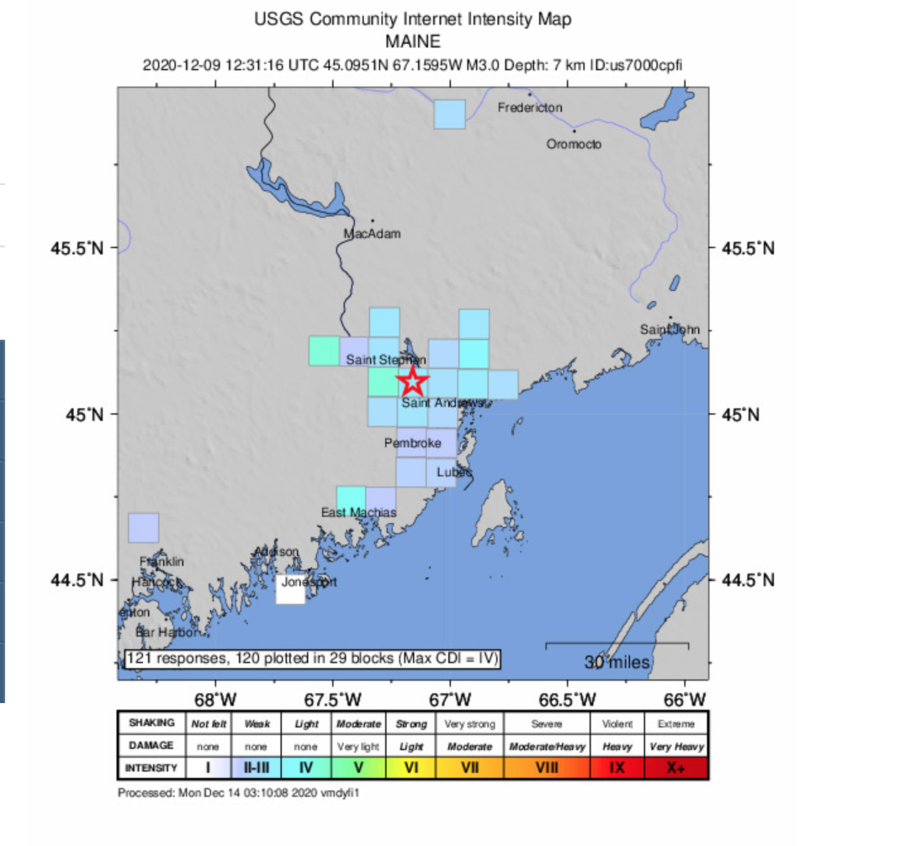 A Pentagon source confirmed to Lead Stories that carrier ships are often positioned off both coasts of the United States and they were there December 11, 2020, on routine missions. U.S. Navy spokesperson Courtney Hillson told Lead Stories, "The U.S. Navy routinely operates off the coast of the United States. We disclose where those ships are operating. They have not been moved for any national tasking; they are conducting routine operations."

Hal Turner's website has been caught spreading alarmist disinformation in the past, including a claim in December 2019 that the Virginia governor had ordered plans to cut off electricity, telephones and internet communications ahead of statewide gun confiscation during the new year. See the Lead Stories article here.

The image used on darkoutpost.com is a photo from the U.S Navy from 2011 and has nothing to do with a bomb being dropped in Maine or with Chinese soldiers. 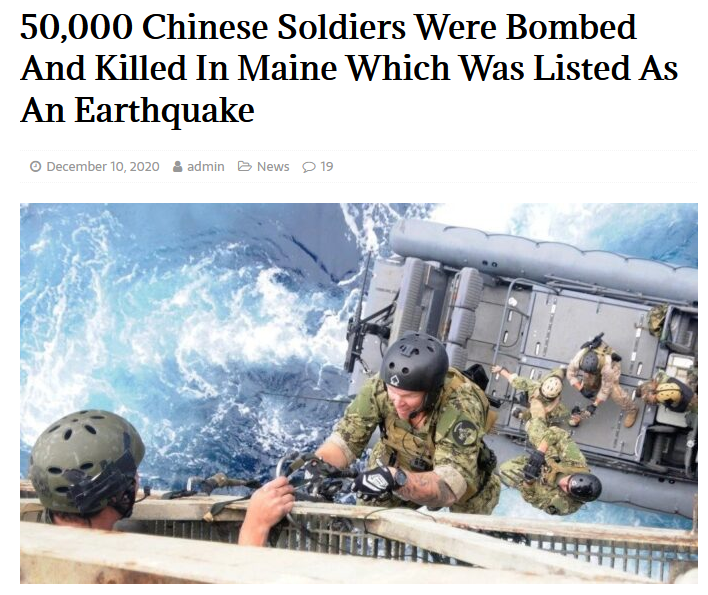 The caption on the real photo on the U.S Navy Flickr page reads:

The origin of the claim about the bomb being dropped on Chinese soldiers appears to have been shared on a reddit forum crediting Steve Quayle, a conspiracy-theory touting radio host.

Steve Quayle broke the news yesterday that an F-16 was shot down by the Chinese and a 30,000 lb bunker buster bomb was dropped on a bunker in Robbinston Maine, killing 50,000 Chinese.

I live 2 hours from there...so I checked. pic.twitter.com/eidi0O8vPU

The Dark Outpost article also contains the claim "an F16 was taken down in Michigan."

A military jet did go down during a training mission and the cause of the crash was under investigation the Detroit News reported. The Dark Outpost article claims the crash is another sign of military unrest post-election in the United States. The Detroit News article shared details about the crash:

Capt. Durwood "Hawk" Jones, 37, of Albuquerque, New Mexico, was at the helm of the F-16 fighter jet when it crashed about 8 p.m. Dec. 8th in the Hiawatha National Forest. The plane was assigned to the Wisconsin Air National Guard's 115th Fighter Wing."

"We are deeply saddened by this tragic loss, and our thoughts and prayers are with the family during this difficult time," 115th Fighter Wing Commander Col. Bart Van Roo said. "Today is a day for mourning, and the 115th Fighter Wing along with the entire Wisconsin National Guard stands with the pilot's family as we grieve the loss of a great Airman, and patriot."