Does this collection of comments date back to 1955 or 1957? No, that's not true: These 20 quips do harken to an earlier time but they do not trace all the way back to the 1950s. This contrived collection of comments seems to have been a popular email to forward as early as 2001. It has since been repurposed in other formats. The similar structure of many of the statements points to a single author who was working with the benefit of hindsight to construct uncanny "predictions" from the '50s, wrapped with nostalgia for the past.

The comments resurfaced as an image of a newspaper clipping in a post (archived here) published on Facebook on December 12, 2020. Under the title, "Comments made in the year 1957," it reads:

The earliest instance of this trope Lead Stories uncovered was posted to a forum board at TurboDodge.com on December 31, 2001. Another copy is found in a small-town online newspaper called the WaynedaleNews.com that was published on February 20, 2002 . An undated edition of the list of 1957 quotes was found on ClevelandSeniors.com, a website that is still up and running, and archived on September 22, 2002.

Some time along the way the year rolled back to 1955.

On January 8, 2006, Snopes published an article, "Are These Comments from 1955? Lists of entries that attempt to illustrate 'the way things used to be' for modern readers can serve a variety of purposes." The article delves into several of the claims of the quotes. The claims addressed in the Snopes article are nearly identical to the newspaper clipping meme, except the date is 1955 instead of 1957, and two small details: the eventual price of the used car is estimated to be $2,000 rather than $5,000; and the astronauts, rather than preparing for space flight down in Texas, are in Florida instead.

I read the other day where some scientists think it's possible to put a man on the moon by the end of the century. They even have some fellows they call astronauts preparing for it down in Florida."

This detail about the space flight, in either the 1955 or 1957 version of this meme, is a clear indication that the quote did not originate in these years. It wasn't until December of 1958 that the word astronaut was agreed upon, and the plans for the recruitment process that would begin in 1959 were drafted. The story is described in an essay by Allen O. Gamble, Ph.D. who was there when it happened. He was the associate director of personnel for manpower of the newly formed National Aeronautics and Space Administration, NASA:

Oddly enough, one of the first hot issues was the names or terms. What should we call the men who would one day fly into space? At Langley Research Center on December 1,1958, we brainstormed, and every name mentioned went up on the blackboard. Of course, somebody said "spaceman" and someone else said "superman" and still another said "space pilot." But perhaps he would be a passenger instead of a pilot, so some wise guy proposed "man-in-a-can." Other suggestions were made, some kidding and some serious. Then one of us came up with a solid suggestion, "Mercury," which made sense. It referred not to the planet Mercury and not to the quicksilver metal mercury, but to the messenger of the Roman gods, who had wings on his heels and legendary speed of flight.

But someone had heard the word mentioned before, so he called Washington. Sure enough, only five days earlier, on November 26, NASA headquarters had officially adopted Project Mercury as the name of the first American manned spaceflight effort, but not yet used the term publicly or even told us. With our best name so far already taken, out came the dictionaries and thesauruses. Someone found that the term 'aeronaut,' referring to those who ride in balloons and other lighter than-air vehicles, was derived from "sailor in the air." From this we arrived at 'astronaut,' meaning "sailor among the stars." We thought we had actually invented a new word, but it later turned up as having been used earlier, in 1929, probably in science fiction. In any event, the term astronaut rang true and was adopted.

There is even a 26-page book published by Sebastian Shug, in May 8, 2020, "Comments Made in the year 1957," dedicated, "For the boomers," and crediting the content aggregator iFunny for the quotes.

A valuable insight into the economy of the mid 1950s, as the United States recovered from World War II and then the Korean War, is this 1959 publication from the United States Department of Labor, "Consumer Prices in the United States 1953-58 Price Trends and Indexes." Although the actual prices of items are not always listed in a consumer price index, compared to the decade earlier, the rate of inflation had slowed tremendously. 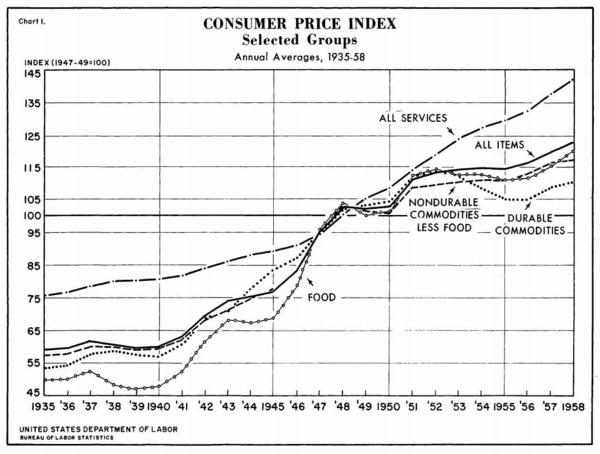