Is the psychiatrist who leads off a video attack on epidemiology and vaccinology correct in saying there is no SARS-Cov-2 virus, no COVID-19 pandemic, no safe vaccine and no need for one? No, that's not true. Neither Dr. Andrew Kaufman, nor any of the other medical professionals who appear in the video with him offer evidence to support their extraordinary claims that COVID-19 does not exist. Kaufman does not explain how in 2020 there have been more than 200,000 unexpected U.S. deaths, attributed to COVID-19. The Johns Hopkins University Coronavirus Research Center put the global COVID-19 death toll at nearly 1.6 million people and the U.S. death toll at 286,117 as of 8:30 p.m. ET on December 8, 2020. Meanwhile, countries that are both allies and enemies of the U.S. have all identified the same virus and undertaken private and public programs to develop a vaccine against it, several of which have passed their preliminary safety trials, two of them with no serious side effects recorded.

Kaufman's claims appeared in the opening minutes of a video on BrandNewTube on December 7, 2020, titled "Ask The Experts (Covid-19 Vaccine)."

⁣Share. Download. Mirror. ⁣With the rollout of the you-know-what just around the corner, we ask a worldwide panel of experts the question on everybody's minds #asktheexperts Produced by Oracle Films...

⁣Share. Download. Mirror. ⁣With the rollout of the you-know-what just around the corner, we ask a worldwide panel of experts the question on everybody's minds #asktheexperts Produced by Oracle Films

On camera, Kaufman (shown below) says the following:

This pandemic is not a real medical pandemic. The COVID-19 vaccine is not proven safe or effective

There is not a clear definition of any new disease for which it can be tested against. Thus there is no target for a vaccine.

There has not been a virus that has been purified or shown to be the cause of an illness.
Since no additional deaths have occurred in relation to a new disease, there is simply no need for a new vaccine.

What follows on the video is a series of nearly-identical claims by doctors, nurses, dentists, chiropractors, naturopaths, a natural nurse and a journalist from the U.S., Belgium, U.K., Ireland, Norway and other European nations. 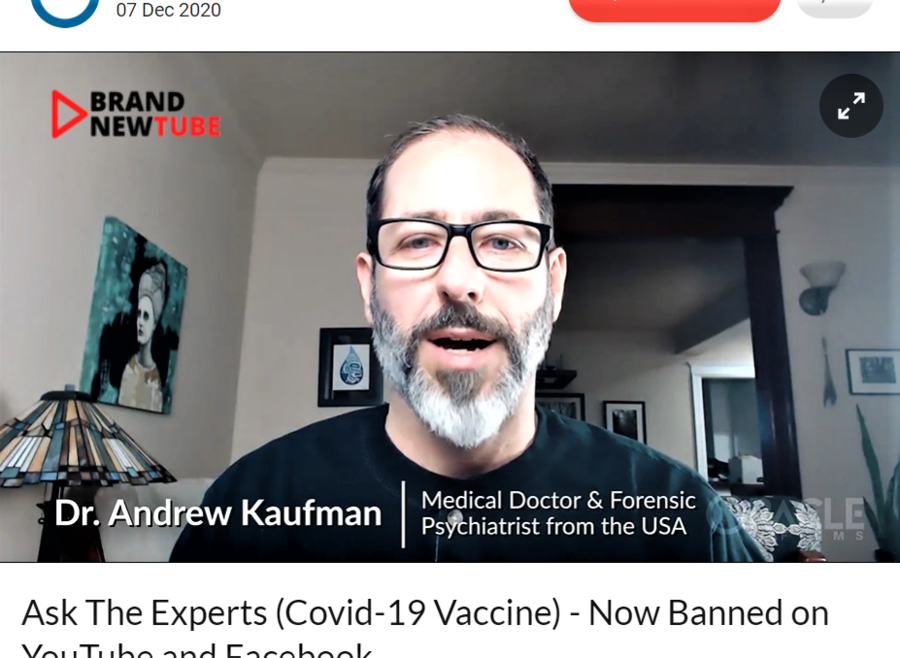 The statement that no additional deaths have occurred in relation to a new disease is incorrect.

Mortality surveillance in the United States during 2020 clearly shows, thus far, more than 250,000 deaths attributed specifically to SARS-CoV-2/COVID-19 and more than 300,000 excess deaths, i.e., more than we would see in a normal year.

As a board-certified forensic psychiatrist, Kaufman has a medical degree, but he is not certified nor qualified by the multiple years of training required by the relevant specialties: epidemiology, virology, vaccinology and microbiology. Medical ethicists call it "drift" when doctors try to work beyond the limitations of their specialty. The North Carolina Medical Board, attributing it to the former CEO of the Federation of State Medical Boards, describes the ethical problems of practicing outside your specialty this way:

No physicians in the 21st century are expected to practice, nor are they capable of practicing, all the disciplines of medicine.

Lead Stories reached out to Upstate Medical Center, where online listings say Kaufman practices. The receptionist answering the phone there on the evening of December 8, 2020, could not find Kaufman's name in the physician directory. Lead Stories left a message on the phone number provided for Kaufman on Doximity, a directory of physicians. We will update this article, as appropriate, if Kaufman responds.

Kaufman: "This pandemic is not a real medical pandemic."

In a December 8, 2020, email to Lead Stories, Dr. Geoffrey Baird, interim chair of laboratory medicine and pathology at the University of Washington School of Medicine, said COVID-19 is clearly caused by a virus. Baird said there's ample evidence of a real medical pandemic:

While some infections are asymptomatic, the virus is real, it has been measured in humans who have been affected, it has been identified in the bodies/organs of people who died of it (and there are photos of the viral particles in infected individuals' organs), it has been shown to cause similar diseases in some animals and the disease can be caused intentionally in experimental settings in these animals. The virus is also very similar to other known viruses that cause similar diseases, both structurally and in its genome sequence.

Here is the link to the Trump administration's declaration of a COVID-19 pandemic, in which the White House cites the World Health Organization's pandemic declaration and refers to the determination of public health experts that the infection epidemic is crossing national boundaries, which is the definition of a pandemic. Kaufman does not list a master's degree in public health nor any other public health training among his credentials.

Kaufman: "The COVID-19 vaccine is not proven safe or effective"

On December 8, 2020, the U.S. Food and Drug Administration released advance copies of a report that while Pfizer's COVID vaccine has "intense" side effects, none are fatal and the vaccine has proven safe and said it expects to approve the vaccine for widespread public use. Kaufman is not a vaccinologist, a medical lab expert nor an epidemiologist or infectious disease expert.

The University of Washington's Baird echoed that, saying in his email to Lead Stories:

In the two mRNA vaccine trials (Pfizer and Moderna), of the thirty thousand trial participants, each had over 100 people become infected with the SARS-CoV-2 virus, but approximately 95% of the infections were in the placebo volunteers while only 5% were in those who got the vaccine. Thus, the vaccines are "effective", since a large group of people were protected (~20-fold lower rate of disease) in the vaccinated individuals compared to placebo.

No serious side effects were identified at the first evaluation time point (several months in), but trials will continue for ~2 years to continue to look for later-onset side effects. As of today, though, the vaccines appear safe.

Kaufman: "There is not a clear definition of any new disease for which it can be tested against"

Kaufman, not a lab scientist, nor a geneticist, is baselessly rejecting the findings of medical experts who have spent their careers studying viruses.

Baird, the University of Washington expert in lab medicine, said the response of humans to the vaccine prove the existence of the infection.

We have the genetic sequence of the virus' genome, pictures of the virus taken from the tissues of infected people, and we can grow the virus in culture (and those cultured virus particles can cause the disease if administered to an experimental animal....we do not administer viruses like this to humans in research experiments since it could be fatal, and therefore it would be unethical).

The disease COVID-19 has been shown to be caused by the SARS-CoV-2 virus; yes, some infections are asymptomatic, but this is a feature of many infectious diseases. When infected by the virus, humans make antibodies to the "spike" proteins on the virus, and these antibodies are highly correlated to protection from infection. The vaccines produced to date all encourage the body to make antibodies to the same "spike proteins" (but they do not include the rest of the virus, and hence the vaccine cannot cause COVID-19). So, there is a clear target for the vaccine, the spike protein, and multiple different vaccine formulations that induce anti-spike antibodies have been shown to raise immunity to SARS-CoV-2 (in phase 1, 2 and 3 trials), indicating that it is the spike protein itself that is the key target.

Kaufman: "There has not been a virus... shown to be the cause of an illness"

"Yes, there has," Baird wrote. "We can easily grow the virus in culture, purify it, and use the purified virus to then cause the disease in animal models."

Baird said the existence of the virus and its effects has been proven and those findings independently reproduced, which is the gold standard for scientific proof:

Reports of growth and isolation of the virus have been reported many times by highly reputable laboratories across the world. We can find the virus in the tissues of infected humans and animals and we can take pictures of the virus with electron microscopes.

The pictures look the same when people take them in different countries, from different people who were infected at different times.

First identified during a cluster of severe illnesses in Wuhan, China, in late 2019, COVID-19 was found to correlate to infection with a new form of coronavirus, SARS-Cov-2, the U.S. CDC reports. Kaufman's training as a forensic psychologist would not acquaint him with the level of virology and microbiology required of CDC lab scientists who identify and track new viruses.

Kaufman: "There is simply no need for a new vaccine"

Vaccine skeptics cite Sweden as an example of a public health system that was expecting the spread of the infection to eventually build up the population's "herd resistance" and thereby stop the spread. Sweden faces growing numbers of cases and has reversed its policy, urging the public to protect themselves through social distancing, mask-wearing and other measures. Bloomberg News reports Sweden has decided its approach did not work and it will undertake a vaccination program. 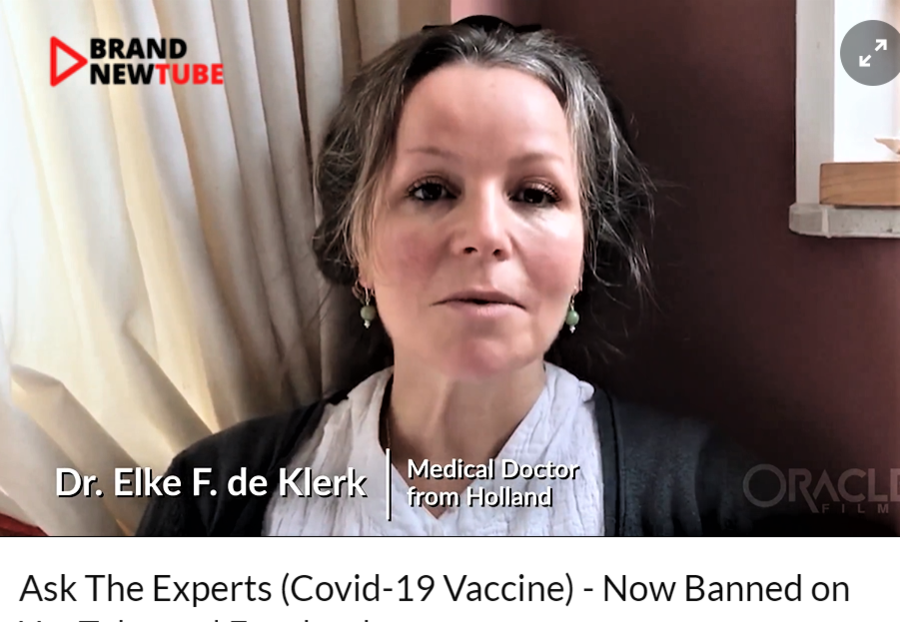 At 27 minutes and 48 seconds in the video, a woman identified as Dr. Elke F. de Klerk, medical doctor from Holland, says "This vaccine could be sterilizing women and girls."

In an email discussion with Lead Stories on December 8, 2020, multiple specialists from the University of Washington Medical School dismissed this claim as highly unlikely.

And in a follow-up email, Dr. Kristina Adams Waldorf, a professor of obstetrics and gynecology at UW Medicine who studies infections during pregnancy offered some reading material in the form of a study of placental response to viruses and said statements like de Klerk's are completely untrue:

...Pregnant women have been infected with viruses throughout evolution...We can thank the incorporation of some of those viruses into the human genome for the proper functioning of the placenta - including the gene mentioned, syncytin 1. Syncytin 1 came from a virus - and now the human placenta uses it for its own purposes, just as it does for many other viral-derived genes that are now simply part of us.

We also don't see any evidence of increased miscarriage or stillbirth due to a COVID-19 infection in pregnancy, which would be the immediate consequence of the scenario that they are imagining might happen. So - in short - completely untrue.