Did Cristiano Ronaldo refuse to shake hands with the president of Israel? No, that's not true: A post that makes the claim relies on old footage of the soccer star appearing to snub Michel Platini, then-president of the Union of European Football Associations. The 2014 video has nothing to do with the Israeli president.

The claim appeared in a video (archived here) published on TikTok by "Edits_Leyends" on May 12, 2021. Atop the brief clip, a message read:

Cristiano Ronaldo doesn't give his hand to the President of Israel because he supports the muslims.

Users on social media saw this at the time of writing: 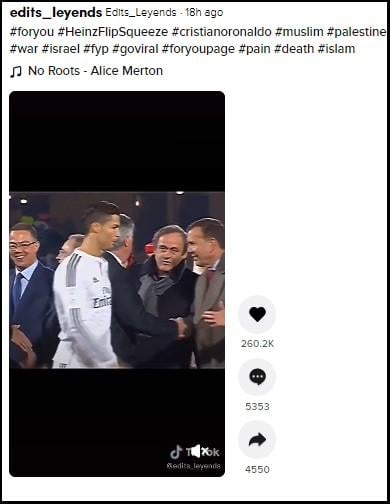 Despite its caption, the video has nothing to do with the Israeli president. The footage shows Ronaldo bypassing Platini after the 2014 FIFA Club World Cup, skipping the customary handshake or hug. According to SB Nation, Platini had said he didn't think Ronaldo should get the prestigious Ballon d'Or award, and that was the root of the apparent snub.

Properly identified examples of the old video can be seen here and here.